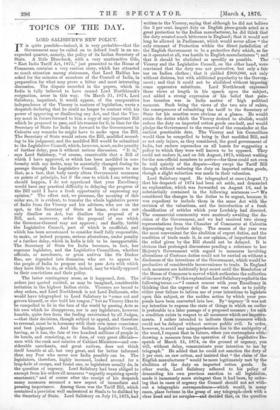 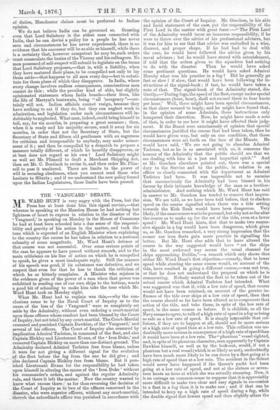 IT is quite possible—indeed, it is very probable—that the Government may be called on to defend itself in an un- expected quarter, namely, the policy of its Indian Secretary of State. A little Blue-book, with a very unattractive title, " East India Tariff'Act, 1875," just presented to the House of Commons, contains a very curious story, which has attracted so much attention among statesmen, that Lord Halifax has asked for the minutes of members of the Council of India, in preparation for what may prove a bitter and most interesting discussion. The dispute recorded in the papers, which in India is fully believed to have caused Lord Northbrook's resignation, arose in this way. On March 31, 1874, Lord Salisbury, impatient, it would appear, of the comparative independence of the Viceroy in matters of legislation, wrote a despatch declaring that he could no longer be content with his power of approving or disallowing any Act, and that the Vice- roy must in future forward to him a copy of any important Bill which he proposed to pass, and his reasons for it, in time for the Secretary of State for India to forward to the Government in Calcutta any remarks he might have to make upon the Bill. The Secretary of State would return the Bill, modified accord- ing to his judgment, and the modified Bill would be submitted to the Legislative Council, which, however, must, under penalty of further delay, pass it without serious discussion. " It is," says Lord Salisbury, " of course, conceivable that a Bill of which I have approved, or which has been modified in con- formity with my desire, may be materially changed during its passage through the Legislative Council. It appears to me that, as a fact, that body rarely alters Government measures on points of principle, but if the case to which I am referring should happen, I do not apprehend that your Excellency would have any practical difficulty in delaying the progress of the Bill until I have a fresh opportunity of expressing my opinion." The effect and, we presume, the meaning of this order are, it is evident, to transfer the whole legislative power of India from the Viceroy and his advisers, who are on the spot, to the Secretary of State at home, who can not only disallow an Act, but disallow the proposal of a Bill, and, moreover, order the proposal of one which the Governor-General may not approve • and finally, forbid the Legislative Council, part of which is unofficial, and which has been accustomed to consider itself fully responsible, to make, or indeed propose serious alterations, under penalty of a further delay, which in India is felt to be insupportable. The Secretary of State for India becomes, in fact, her supreme legislator, and the Legislative Councillors, whether officials, or merchants, or great natives like Sir Dinkur Rao, are degraded into dummies, who are to appear to the people of India to propose and to pass Acts with which they have little to do, or which, indeed, may be wholly opposed to their convictions and their policy.

The latter contingency arose, as it happened, first. The orders just voted excited, as may be imagined, considerable irritation in the highest Indian circle. Viceroys are bound to obey orders, and Lord Northbrook is not Lord Dalhousie, who would have telegraphed to Lord Salisbury to "come out and govern himself, or else hold his tongue ;" but no Viceroy likes to be compelled to lie in the face of the world by passing Acts as his own which he disapproves, nor is any legislature, however humble, quite free from the feeling entertained by all Judges, —that their decisions, though subject to appeal, and therefore to reversal, must be in harmony with their own inner conscience and best judgment. And the Indian Legislative Council, having, as it has, the fate of two hundred millions of people in its hands, and consisting, as it does, of very great officials— men with the rank and salaries of Cabinet Ministers—and con- siderable merchants, and great natives, does not think itself humble at all, but very great, and far better informed than any Peer who never saw India possibly can be. The legislators, therefore, highly incensed, looked around for a loop-hole of escape, and found one, as legislators usually do, in the question of urgency. Lord Salisbury had been obliged to exempt from his orders all measures "urgently requiring speedy enactment," and of course after the receipt of his despatch many measures assumed a new aspect of immediate and pressing importance. Among them was the Tariff Bill, which contained a provision well understood at Simla to be disliked by the Secretary of State. Lord Salisbury on July 15, 1875, had written to the Viceroy, saying that although he did not believe the 5 per cent. import duty on English piece-goods acted as a great protection to the Indian manufacturer, he did think that the duty created much bitterness in England ; that it would not long be allowed in Parliament, which would never allow " the only remnant of Protection within the direct jurisdiction of the English Government to be a protective duty which, so far as it operated at all, was hostile to English manufacturers "; and that it should be abolished as speedily as possible. The Viceroy and the Legislative Council, on the other hand, were convinced that the duty was not protective, but only a fair tax on Indian clothes ; that it yielded £900,000, not only without distress, but with additional popularity to the Govern- ment; and that it could not be abolished without imposing some oppressive substitute. Lord Northbrook expressed these views at length in his speech upon the subject, and added a strong expression of his belief that pain- less taxation was in India matter of high political moment. Such being the views of the two sets of rulers‘, the consequences of submitting the tariff to the Secretary of State for his sanction were obvious at a glance. He would retain the duties which the Viceroy desired to abolish, would reduce the duty on imported cotton goods one-half, and would pledge the Government to the removal of the remainder at the earliest practicable date. The Viceroy and his Councillors would then be compelled to bring in that modified Bill, and so not only injure, as they considered, the good government of India, but endure reproaches on all hands for suggesting a policy to which they were well known to be opposed. They could not endure it, and on 5th August, 1875, without waiting for the non-official members to arrive—for these could not even be told quietly of the dispute—they swept the Tariff Bill through without reducing the duty on imported cotton goods, though a slight reduction was made in their valuation.

Lord Salisbury raged. He telegraphed at once (August 7) that his despatch of 1874 had been set aside, and demanded an explanation, which was forwarded on August 16, and is substantially contained in the following sentences :—" We considered the changes in the duties to be urgent, because it was expedient to include them in the same Act with the revision of the valuations, and the introduction of a fresh classification of articles which your Lordship had directed.

The commercial community were anxiously awaiting the de- cision of the Government, and we had received two strong representations from the Chamber of Commerce at Calcutta deprecating any further delay. The season of the year was- the most convenient for the abolition of export duties, and the condition of trade made it, in our opinion, of importance that the relief given by the Bill should not be delayed. It is obvious that prolonged discussions pending a reference to her Majesty's Government with regard to measures involving alterations of Customs duties could not be carried on without a disclosure of the intentions of the Government, which would be productive of considerable inconvenience to trade. In England such measures are habitually kept secret until the Resolution of the House of Commons is moved which authorises the collection of the new duty." To this explanation Lord Salisbury replied in the following terms :—" I cannot concur with your Excellency in thinking that the urgency of the case was such as to justify either your failure to inform me of your intentions to legislate upon this subject, or the sudden action by which your pro- posals have been converted into law. By' urgency' it was not my intention to express the state of things in which an earlier is preferable to a later passage of a proposed measure ; for such a condition exists in respect to all measures which are improve- ments. I rather intended to indicate those measures which could not be delayed without serious public evil. In order, however, to avoid any misapprehension due to the ambiguity of the word, I request that in future, when you contemplate with- drawing a measure from the operation of the Legislative De- spatch of March 31, 1874, on the ground of urgency, you will, without delay, communicate your intention to me by telegraph." He added that he could not sanction the duty of 5 per cent. on raw cotton, and insisted that " the claim of the English manufacturer " would be more legitimately met by the abolition of the duty on imported cotton goods. In other words, Lord Salisbury adhered to his policy of demanding his own previous sanction to all legislation, made it immensely more stringent than it had been, by order- ing that in cases of urgency the Council should not act with- out a telegraphic correspondence—which would, in many cases, place fortune in the grasp of any telegraph-clerk with a clear head and no scruples—and decided that, on the question • • opinion. We do not believe India can be governed so. Granting • even that Lord Salisbury is the ablest man connected with India, that he can devise a policy for a people he has never seen and circumstances he has never experienced, there is no evidence that his successor will be as able as himself, while there is a certainty that, however competent he may be, such orders -must emasculate the brains of the Viceroy and his colleagues. No men possessed of self-respect will submit to legislate on the terms that Lord Salisbury proposes,—that is, with a liability, when they have matured their plans, to be compelled not only to lay them aside—that happens to all men every day—but to substi- tute for them plans of which they disapprove. In India, where every change involves endless consequences, conscientious men cannot do this ; while the peculiar kind of able, but slightly opinionated statesmen whom India breeds—their lives, like the life of Marryat's boatswain, being " all 'mergency "—cer- tainly will not. Indian officials cannot resign, because they have nothing to eat if they do, but they can neglect work to admiration, and legislation under such circumstances will in- dubitably be neglected. What man, indeed, could bring himself to toil, say, for six months, in preparing a great measure ; then, when it is ready and his majority secure, send it away for six months, in order that not the Secretary of State, but the Secretary of State and fifteen old gentlemen with an eagerness for criticism and irresponsible to anybody, may make mince- meat of it ; and then be compelled by a despatch to propose a measure totally different, of which he heartily disapproves, or at best does not regard as his own ? Lord Salisbury might as well set Mr. Plimsoll to draft a Merchant Shipping Act, then set Mr. O. Bentinck to revise it, and then order Mr. Plim- soll to pass it unaltered. There are limits to the power of will in securing obedience, when you cannot send those who hesitate to Siberia • and if we understand the new policy forced upon the Indian Legislatures, those limits have been passed.