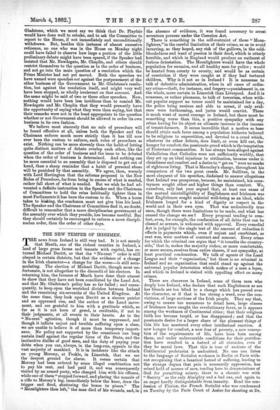 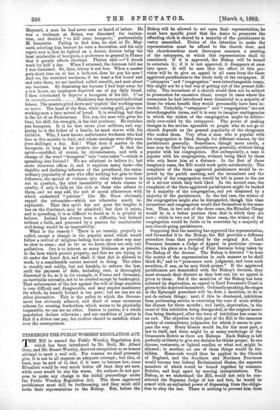 THE NEW TEMPER OF IRISHMEN.

THE news from Ireland is still very bad. It is not merely that Meath, one of the richest counties in Ireland, a land of large grass farms and tenants with capital, has re- turned Michael Davitt, or that the "No-rent" order is still obeyed in certain districts, but that the evidence of a change in the Irish character—a change for the worse—is still accu- mulating. The election of Michael Davitt, though most un- fortunate, is not altogether to the discredit of his electors. In returning him, the farmers of Meath have done their utmost to show that they have not been conciliated by the Land Act, and that Mr. Gladstone's policy has so far failed ; and conse- quently, to keep open the wretched division between Ireland and the remaining six-sevenths of the United Kingdom. At the same time, they look upon Davitt as a sincere patriot and an oppressed one, and the author of the Land move- ment, and are grateful to him with a gratitude which, so far as it is not born of greed, is creditable, if not to their judgments, at all events to their hearts. As to the " No-rent" agitation, though it must be suppressed, and though it inflicts unjust and terrible suffering upon a class, we are unable to believe it of more than temporary import- ance. No policy not supported by the conscience can long sustain itself against the regular force of the State, and the instinctive dislike of good men, and the duty of paying your debts when you can, always, in the long-run, appeals to the vast majority of mankind. It is in incidents like the attack on young Morony, at Feakle, in Limerick, that we see

the deepest ground for alarm. It seems certain that Morony had been ordered by some illegal combination not to pay his rent, and had paid it, and was consequently visited by an armed party, who charged him with his offence, while one of them " stepped forward, and placing the muzzle of a rifle to Morony's leg, immediately below the knee, drew the trigger and fired, shattering the bones to pieces." The " Moonlighters then left," the man died of his wounds, and, in the absence of evidence, it was found necessary to arrest seventeen persons under the Coercion Act. There is something in the self-restraint of these " Moon- lighters," in the careful limitation of their crime, so as to avoid incurring, as they hoped, any risk of the gallows, in the cold- bloodedness and want of passion in their deed, which is utterly horrible, and which in England would produce an outburst of furious detestation. The Moonlighters would have the whole population for enemies, and all healthy men for police ; would be hunted from county to county, and would be as certain of conviction if they were caught as if they had tortured children. Why is it not so in Ireland ? It is nonsense to talk of defective administration, when in all cases of ordin- ary crime—theft, for instance, and forgery—punishment is, on the whole, more certain in Limerick than Liverpool. And it is nonsense, or rather pleonasm, to talk of terrorism, when with- out popular support no terror could be maintained for a day, the police being anxious and able to arrest, if only evid- ence were forthcoming, and juries would convict. There is much want of moral courage in Ireland, but there must be something worse than this, a positive sympathy with any crime having for its object an ultimate increase in the income of tenant-farmers. It seems incredible that a motive so base should attain such force among a population hitherto believed to be religious to superstition, and devoted to a creed which, whatever its other defects, does limit, or even kill out, the hunger for comfort, the passionate greed which is the temptation of Protestant communities. It has always been alleged against Catholicism that Catholics were not sufficiently worldly, that they set up an ideal injurious to civilisation, because under it cleanliness and comfort and a desire to " get on " were no marks of righteous living. That is Macaulay's charge, throughout his comparison of the two great creeds. Mr. Sullivan, in the most eloquent of his speeches, disdained to answer allegations that Ireland was prosperous, because, he maintained, his coun- trymen sought other and higher things than comfort. We, ourselves, only last year argued that, at least one cause of the mutual unintelligibility of Englishmen and Irishmen was that Englishmen sought material well-being as an ideal, while Irishmen longed for a kind of dignity or respect in the world and in their own eyes. That was undoubtedly true once, though there were limitations to be made, and what has caused the change we see ? Every proposal tending to com- fort, even, for example, the confiscation of all debts that can be classed as arrears, is welcomed with approval. Every remedial Act is judged by the single test of the amount of reduction it effects in payments which, even if unjust and exorbitant, as rent was, were matters of contract and consent. Every crime for which the criminal can argue that "it benefits the country- side," that is, makes the majority richer, or more comfortable, or more secure, receives from entire classes, if not sympathy, at least practical condonation. We talk of agents of the Land League and their " organisation," but there is no criminal in Ireland and no organisation that could stand up against the universal popular detestation which makes of a man a leper, and which in Ireland is visited with appalling effect on many crimes.

There are observers in Ireland, some of them men who deeply love Ireland, who declare that such Englishmen as are her friends are too blind to a change which has passed over the character, or if that is too strong a word, over the con- victions, of large sections of the Irish people. They say that, owing to causes too numerous to detail here, large classes of Irishmen have caught the revolutionary fever, as it appears among the workmen of Continental cities ; that their religious faith has become torpid, or has disappeared ; and that the passionate desire for a larger share of the pleasant things of this life has mastered every other intellectual emotion. A

new hunger for comfort, a new fear of poverty, a new concep- tion of the requirements of life, have been born among them, and under unfavourable conditions for their gratifica- tion have resulted in a hatred of all obstacles, even if they be moral laws. That this is true of sections of the Continental proletariat is undoubted. No one can listen to the language of Socialist workmen in Berlin or Paris with- out recognising that a fanatical hatred of suffering, leading to the strange dogma that pain is necessarily oppression, has seized hold of masses of men, tending here to denunciations of God for permitting misery. there to a chronic war with " Society as the only Almighty and a bad one, and again to an anger hardly distinguishable from insanity. Read the con- fession of Florion, the French Socialist who was condemned on Tuesday by the Paris Court of Assize for shooting at Dr. Maynard, a man he had never seen or heard of before. He was a workman at Reims, was dismissed for inatten- tion, and decided " to kill some bourgeois," preferentially M. Gambetta. Failing to find him, he shot at Dr. May- nard, selecting him because he wore a decoration, and his only regret now is that he lighted on a doctor, doctors being the least intolerable of bourgeois, a preference so general in France that it greatly affects elections. Florion said :—" I struck work for half a day. When I returned, the foreman told me I was dismissed. So, then, labour is not free. When a master puts short time on or has a lock-out, does he pay his men ? And we, the wretched workmen, if we want a few hours' rest and take them, we are insulted, called canaille, and sent about our business. By dismissing me because I had kept away for a few hours, my employers deprived me of my daily bread. I then determined to deprive a bourgeois of his life. C' est

larevanche,—voila Machinery has destroyed individual labour. The masters grind down and 'exploit' the working-men en masse. The head of the firm, while coining gold, gives the working-man a bare morsel of bread. It is revolting, but that is the lot of us Proletarians. Yes, yes, the man who gives his time, his skill, his strength, is the real producer. He enriches you bourgeois. It is he that earns your millions, and sup- posing he is the father of a family, he must starve with his children. Why, I have known unfortunate workmen who had four or five mouths to feed, and whose earnings were fifty sous (two shillings) a day. Bah I What does it matter to the bourgeois, so long as he pockets his gains ?" Is that the spirit—modified, of course, by circumstances, and with a change of the word " bourgeois" into " rent-taker "—which is spreading into Ireland ? We are reluctant to believe it ; but acute observers affirm it, and it explains many facts—the timidity and declining influence of the priesthood, the extra- ordinary popularity of men who offer nothing but gain to their followers, the spread of violence into cities where tenure is not in question, the utter insensibility of whole classes to cruelty, if only it falls on the rich or those who adhere to them, and we may add, the sort of moral abhorrence with which undoubted " patriots " like Mr. Shaw obviously regard the extremists—which are otherwise nearly in- explicable. That this spirit has not gone the lengths it has on the Continent, may be admitted ; but that it exists, and is spreading, it is as difficult to doubt as it is painful to believe. Ireland has always been a difficulty, but Ireland without a faith, and possessed by a passion for unattainable well-being, would be an impossibility.

What is the remedy ? There is no remedy, properly so called, except a change in the popular mind, which would follow a revival of religious feeling, but in any other way may be slow to come ; and as far as we know, there are only two palliatives. One is to interest as many Irishmen as possible in the laws which protect property, and this we are trying to do under the Land Act, and shall, if that Act is allowed to work, to a considerable extent succeed in doing. The other is steadily and coldly, but not harshly, to enforce the law, until the payment of debt, including rent, is thoroughly discerned to be, as it is, for example, in France and Germany, an inevitable necessity, not to be averted except by bankruptcy. That enforcement of the law against the will of large numbers is very difficult and disagreeable, and may require machinery for which, by herself, Ireland is too poor ; but we can see no other alternative. This is the policy to which the Govern- ment has obviously adhered, and short of some enormous scheme for creating freeholders, which seems to be physically impossible, we can see no other. Justice is justice, if a whole population declare otherwise ; and one condition of justice is that if a debtor can pay, his creditor should be satisfied, what- ever the consequences.