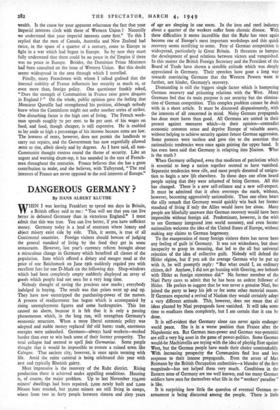 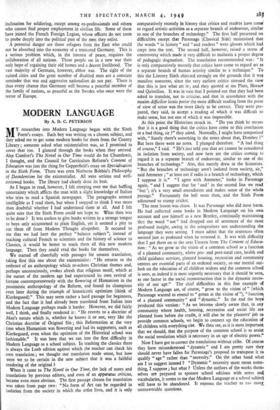 WHEN I was leaving Frankfurt to spend ten days in Britain, a British officer said to me : " You will see that you can live better in defeated Germany than in victorious England." I must admit that this was true. You can live better, if you have sufficient money. Germany today is a land of contrasts where luxury and abject misery exist side by side. This, it seems, is true of all Continental countries. Foreign visitors should beware of judging the general standard of living by the food they get in some restaurants. However, last year's currency reform brought about a miraculous change in Germany which benefited all classes of the population. Inns which offered a dreary and meagre meal at the price of one Reichsmark on June r9th suddenly regaled you with excellent fare for one D-Mark on the following day. Shop-windows which had been completely empty suddenly displayed an array of goods which people had not seen for a very long time.

Nobody thought of saving the precious new marks ; everybody indulged in buying. The result was that prices went up and up. They have now outstripped the purchasing-power of the masses. A process of readjustment has begun which is accompanied by rising unemployment figures and some bankruptcies. This has caused no alarm, because it is felt that it is only a passing phenomenon which, in the long run, will strengthen Germany's economic structure. When a more liberal economic policy was adopted and stable money replaced the old barter trade, enormous energies were unleashed. Germans—always hard workers—worked harder than ever to win back some of their former prosperity. The total collapse had seemed to spell finis Germaniae. Some people thought that it would be impossible to restore a ruined town like Cologne. That ancient city, however, is once again teeming with life. Amid the ruins carnival is being celebrated this year with zest and typically Rhenish gaiety.

Most impressive is the recovery of the Ruhr district. Rising production there is achieved under appalling conditions. Housing is, of course, the major problem. Up to last November 154,0o0 miners' dwellings had been repaired, 2,000 newly built and 2,000 Nissen huts erected, but 32,000 miners are still living in camps, where from two to forty people between sixteen and sixty years of age are sleeping in one room. In the iron and steel industry about a quarter of the workers suffer from chronic disease. With these difficulties it seems incredible that the Ruhr has once again become one of Europe's most important workshops and this quick recovery seems terrifying to some. Fear of German competition is widespread, particularly in Great Britain. It threatens to hamper the development of good relations between victors and vanquished. In this matter the British Foreign Secretary and the President of the Board of Trade have shown a sensible attitude which was deeply appreciated in Germany. Their speeches have gone a long way towards convincing Germans that the Western Powers want tc further, not hinder, Germany's recovery.

Dismantling is still the biggest single factor which is hampering German recovery and poisoning relations with the West. Many Germans feel that its main purpose is not security but the elimina- tion of German competition. This complex problem cannot be dealt with in a short article. It must be discussed dispassionately, with the interests of all concerned in mind. Noisy German propaganda has done more harm than good. All Germans are united in their protest against measures which—in their opinion—contradict economic common sense and deprive Europe of valuable assets, without helping to achieve security against future German aggression. Some protests were tactless and gave rise to the assertion that nationalistic tendencies were once again gaining the upper hand. It has even been said that Germany is relapsing into Nazism. What is the truth ? • When Germany collapsed, even that modicum of patriotism which is essential to keep a nation together seemed to have vanished. Separatist tendencies were rife, and most people dreamed of emigra- tion to begin a new life elsewhere. In those days one often heard people saying that they were ashamed of being German. All this has changed. There is a new self-reliance and a new self-respect. It must be admitted that it often oversteps the mark, without, however, becoming aggressively nationalistic. Thus one often hears the silly remark that Germany would quickly win back her former standard of living if only the Allies would leave her alone. Many people are blissfully unaware that German recovery would have been impossible without foreign aid. Predominant, however, is the wish to see Germany integrated into world economy, and even former nationalists welcome the idea of the United States of Europe, without making any claims to German hegemony.

To the exasperation of many foreign visitors there has never been any feeling of guilt in Germany. It was not wickedness, but sheer incapacity to grasp its meaning, that led to the all but universal rejection of the idea of collective guilt. Nobody will defend the Hitler regime, but if you ask the average German why he put up with it, he will promptly reply : " But what could I, an ordinary citizen, do? Anyhow, I did not go hunting with Goering, nor hobnob with Hitler as foreign statesmen did." No former member of the Nazi Party cares to admit that he has been an ardent follower of Hitler. He prefers to suggest that he was never a genuine Nazi, but joined the party to keep his job or for some other material reason. If Germans expected a revival of Nazism they would certainly adopt a very different attitude. This, however, does not mean that all ideas planted by Nazi propaganda have vanished. It will take some time to eradicate them completely, but I am certain that it can be done.

It is self-evident that Germany alone can never again endanger world peace. She is in a worse position than France after the Napoleonic era. But German man-power and German war-potential are still a very big asset in the game of power-politics. Some German would-be Machiavellis are toying with the idea of playing East against West, but the German people have made their choice unmistakably. 'With increasing prosperity the Communists find less and less response to their intense propaganda. Even the arrest of Max Reimann by the British Occupation authorities—a blunder of the first magnitude—has not helped them very much. Conditions in the Eastern zone of Germany are too well known, and too many German soldiers have seen for themselves what life in the " workers' paradise is like.

It is surprising how little the question of eventual German re- armament is being discussed among the people. There is little inclination for soldiering, except among ex-professionals and others who cannot find proper employment in civilian life. Some of these have joined the French Foreign Legion, whose officers do not seem to probe deeply into the political past of the men they enlist.

A potential danger are those refugees from the East who could not be absorbed into the economy of a truncated Germany. This is a serious problem which, in the interest of peace, requires the collaboration of all nations. These people see in a new war their only hope of regaining their old homes and a decent livelihood. The vast majority of Germans, however, abhor war. The sight of the ruined cities and the great number of disabled men are a constant reminder that war and aggressive nationalism do not pay. There is thus every chance that Germany will become a peaceful member of the family of nations, as peaceful as the Swedes who once were the terror of Europe.