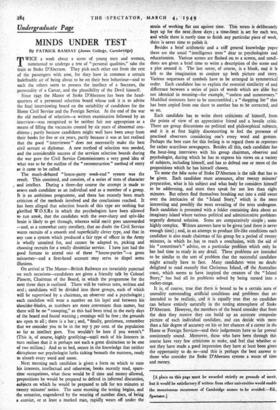 By PATRICK RAMSAY (Jesus College, Cambridge) /11 WICE a week about a score of young men and women, I summoned to undergo a test of " personal qualities," take the train to Stoke D'Abernon. They pick each other out from the rest of the passengers with ease, for they- have in common a certain indefinable air of being about to be on their best behaviour—and to each the others seem to possess the intellect of a Socrates, the personality of a Caesar, and the plausibility of the Devil himself.

Since 1945 the Manor of Stoke D'Abernon has been the head- quarters of a personnel selection board whose task it is to advise the final interviewing board on the suitability of candidates for the Home Civil Service and the Foreign Service. At the end of the war the old method of selection—a written examination followed by an interview—was recognised to be neither fair nor appropriate as a means of filling the vacancies created by six years of abnormal con- ditions ; partly because candidates might well have been away from their books for five or six years, partly because it was at last realised that the good " interviewee " does not necessarily make the best civil servant or diplomat. A new method of selection was needed, and the considerable success of the services selection boards during the war gave the Civil Service Commissioners a very good idea of what was to be the outline of the " reconstruction " method of entry as it came to be called.

The much-debated " house-party week-end " system was the result. This consisted, and consists, of a series of tests of character and intellect. During a three-day course the attempt is made to assess each candidate as an individual and as a member of a group. It is an ambitious programme, and there has recently been much criticism of the methods involved and the conclusions reached. It has been alleged that selection boards of this type are nothing but glorified W.O.S.B.s in which the psychologists have been allowed to run amok, that the candidate with the over-sharp and spiv-like brain is likely to get through, whereas solid merit goes unrewarded —and, as a somewhat catty corollary, that no doubt the Civil Service wants recruits of a smooth and superficially clever type, and that in any case a system which produced a fair type of officer in the Army is wholly unsuited for, and cannot be adapted to, picking and choosing recruits for a totally dissimilar service. I have just had the good fortune to attend one of these " house-parties "—a gross misnomer—and a first-hand account may serve to dispel some illusions.

On arrival at The Manor—British Railways are invariably punctual on such occasions—candidates are given a friendly talk by Colonel Finsent, Chairman of the Board, in which the programme for the next three days is outlined. There will be various tests, written and oral ; candidates will be divided into three groups, each of which will be supervised by a chairman, an observer and a psychologist ; each candidate will wear a number on his lapel and between his .shoulder-blades, as numbers are more convenient than names, but there will be no " snooping," as this had been tried in the early days of the board and found wanting ; evenings will be free ; the grounds are open to all ; there is a bar ; and, "finally, gentlemen, remember that we consider you to be in the top 5 per cent. of the population so far as intellect goes. You wouldn't be here if you weren't." (This is, of course, highly gratifying—until each of his listeners in turn realises that it is perhaps not such a great distinction to be one of two million.) And so to bed, secure in the knowledge that neither dictaphone nor psychologist lurks ticking beneath the mattress, ready to absorb every word and snore.

Next morning each candidate is given a form on which to state his interests, intellectual and otherwise, books recently read, spare- time occupations, what these would be if time and money allowed, propositions he would be prepared to defend in informal discussion, subjects on which he would be prepared to talk for ten minutes at twenty minutes' notice. The same morning the testing begins, and the sensation, engendered by the wearing of number discs, of being a convict, or at least a marked man, rapidly wears off under the

strain of working flat out against time. This stress is deliberately kept up for the next three days ; a time-limit is set for each test, and while there is rarely time to finish any particular piece of work, there is never time to polish it.

Besides a brief arithmetic and a stiff general knowledge paper there are the usual "intelligence tests " dear to psychologists and educationists. Various scenes are flashed on to a screen, and candi- dates are given a brief time to write a description of the scene and a plot around it. The last scene, of course, is a blank, and it is left to the imagination to conjure up both picture and story. Various sequences of symbols have to be arranged in symmetrical order. Each candidate has to explain the essential similarity of and difference between a series of pairs of words which are alike but not identical in meaning—for example, " useless and unnecessary." Muddled sentences have to be unscrambled ; a " shopping list " that has been copied from one sheet to another has to be corrected, and so on.

Each candidate has to write short criticisms of himself, from the points of view of an appreciative friend and a hostile critic. There are group discussions on political and philosophical subjects, and it is at first highly disconcerting to feel the presence of practised observers considering one's every word and gesture. Perhaps the best cure for this feeling is to regard them as reporters for rather scurrilous newspapers. Besides all this, each candidate has the hour-long interviews with his group chairman, observer and psychologist, during which he has to express his views on a variety of subjects, including himself, and has to defend one or more of the propositions which he has himself chosen.

To some the bite noire of Stoke D'Abernon is the talk that has to be given. Each candidate must announce, after twenty minutes' preparation, what is his subject and what body he considers himself to be addressing, and must then speak for not less than eight minutes. But others find themselves breaking out into a cold sweat over the intricacies of the " Island Story," which is the most interesting and possibly the most revealing of the tests undergone. Each candidate is presented with a folder containing data about an imaginary island where various political and administrative problems urgently demand solution. Some are comparatively simple ; some highly. complex. Written answers have to be given (and there is never enough time) ; and, in an attempt to produce life-like conditions each candidate is also made chairman of his group for a period of twenty minutes, in which he has to reach a conclusion, with the aid of his " committee's " advice, on a particular problem which only he has had time to study in any detail. These problems are intended to be similar to the sort of problem that the successful candidate might actually have to face. Many candidates were no doubt delighted to read recently that Christmas Island, off the Australian coast, which seems to have inspired the creators of the " Island Story," has had all its problems solved by being turned into a rocket-range.

It is, of course, true that there is bound to be a certain aura of unreality surrounding artificial conditions and problems that are intended to be realistic, and it is equally true that no candidate can behave entirely naturally in the testing atmosphere of Stoke D'Abernon. However, the members of the board consider that from the data they receive they can build up an accurate composite picture of each individual candidate, and can decide with more than a fair degree of accuracy on his or her chances of a career in the Home or Foreign Services—and their judgements have so far proved consistently sound. Moreover, those who have been through this course have very few criticisms to make, and feel that whether or not they have made a good impression they have at least been given the opportunity to do so—and this is perhaps the best answer to those who consider the Stoke D'Abernon system a waste of time and money.