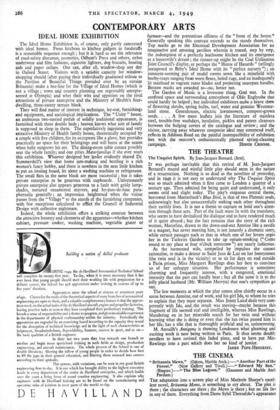 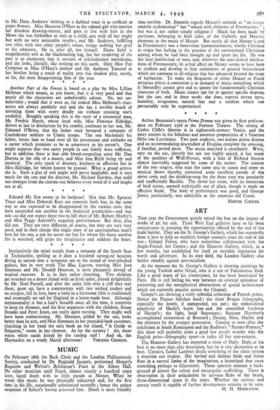 " Britannia Mews." (Odeon, Marble Arch.)—" Another Part of the

THE adaptation into a screen play of Miss Marjorie Sharpe's excel- lent novel, Britannia Mews, is something to cry about. The plot is there ; the characters are there ; the Mews is there ; but no life lies in any of them. Everything from Dame Sybil Thorndyke's appearance

to Mr. Dana Andrews' miming to a dubbed voice is as artificial as paper flowers. Miss Maureen O'Hara as the refined girl who marries her drunken drawing-master, and goes to live with him in the Mews she was forbidden to visit as a child, acts with all her might but with no very noticeable results ; and Mr. Andrews, fulfilling two roles with two other people's voices, brings nothing but grief to his admirers. He is, after all, not himself. Dame Sybil is magnificently evil as the blackmailing hag, but her rendering of the part is so exuberant that it savours of old-fashioned melodrama, and she looks, literally, like nothing on this earth. Only Miss Fay Compton as Miss O'Hara's mother and Mr. Anthony Tancred as her brother bring a touch of reality into this shadow play, surely, so far, the most disappointing film of the year.

Another Parr of the Forest is based on a play by Miss Lillian Hellman which means, as you know, that it is very good and that nearly all the characters are unbelievably odious. No, not un- believably ; would that it were so, for indeed Miss Hellman's char- acters are always painfully real and she has a terrible knack of investing them with every deadly sin without straining one's credulity. Roughly speaking this is the story of a tyrannical man, Mr. Fredric March, whose loyal wife, Miss Florence Eldridge, driven at last to distraction by his cruelty, confesses to her son, Mr. Edmond O'Brien, that his father once betrayed a company of Confederate soldiers to Union troops. The son blackmails his father, forces him to hand over all his possessions and embarks on a career which promises to be as unsavoury as his parent's. One might suppose that two nasty people in one family were sufficient, but in addition there is that able blood-congealing actor Mr. Dan Duryea in the role of a moron, and Miss Ann Blyth being sly and immoral. The only spark of decency, kindness or affection lies in Miss Eldridge, for whom heaven be praised. What a grand actress she is. Such a glut of evil might well prove laughable, and it says much for the cast and the director, Mr. Michael Gordon, that until one emerges from the cinema one believes every word of it and laughs not at all.

Edward My Son seems to be foolproof. Not that Mr. Spencer Tracy and Miss Deborah Kerr are remotely fools but, in tle same way as one expected to be disappointed by the various casts that have succeeded one another in the theatrical production—and was not—so did one expect these two to fall short of Mr. Robert Morley's and Miss Peggy Ashcroft's exquisite performances. But they, also, did not. They are very different, of course, but they are very very good, and in their charge this tragic story of an unscrupulous man's love for his son, a son we never see but for whose life many another life is wrecked, still grips the imagination and saddens the heart.

Instinctively the mind recoils from a romance of the South Seas in Technicolor, spelling as it does a hundred sarong-ed beauties diving in unison into a turquoise sea to the sound of over-plucked guitars, but in very truth The Blue Lagoon, starring Miss Jean Simmons and Mr. Donald Houston, is most pleasantly devoid of tropical excesses. It is, in fact, rather charming. Two children get wrecked on a desert island with an Irish sailor, played delightfully by Mr. Noel Purcell, and after the sailor falls over a cliff they stay there, grow up, have a contretemps with two wicked traders and an octopus, fall in love, have a baby in a hurricane (this is traditional) and eventually set sail for England in a home-made boat. Although sentimentality is but a hair's breadth away all the time, it contrives to keep its distance, and the first sequences with the children, Susan Stranks and Peter Jones, are really quite moving. They might well have been embarrassing. Mr. Houston, gilded by the sun, looks better than he acts, and Miss Simmons in her pounded-bark costumes, clutching in her hand the only book on the island, " A Guide to Etiquette," seems in her element. As for the scenery ! Ah, those warm white sands kissed by the curling surf ! And oh, the Haymarket on a windy March afternoon! VIRGINIA GRAHAM.