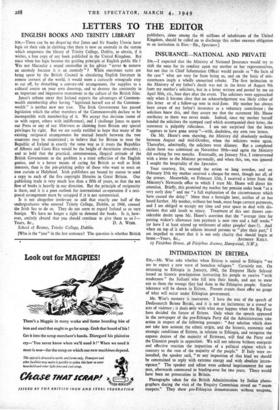 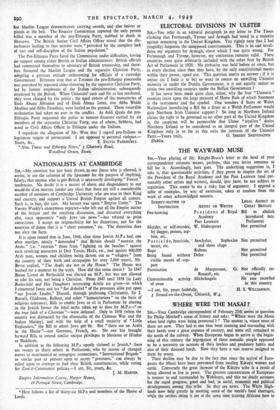 SIR,—Mr. Wise asks whether when Eritrea is united to Ethiopia "we are to expect a new wave of homeless refugees." Certainly not. On returning to Ethiopia in January, 1941, the Emperor Haile Selassie issued an historic proclamation instructing his people to receive " with tenderness " the Italians who fell into their hands, and not to mete out to them the wrongs they had done to the Ethiopian people. Similar tolerance will be shown in Eritrea. Present events there offer no gauge of what will occur under Ethiopian government.

Mr. Wise's memory is inaccurate. I have the text of the speech of Dedjasmatch Beiene Beraki, and it is not an incitement to a crowd to acts of violence ; it deals only with what may happen when the Big Four have decided the future of Eritrea. Only when the speech appeared in the newspaper of the pro-Ethiopia Party did the Administration take action in respect of the following passages: " Any solution which does not take into account the ethnic origin, and the historic, economic and strategic conditions of Eritrea, in relation to Ethiopia, and recognise the express desires of the majority of Eritreans, will find the Party and the Unionist people in opposition. We will not tolerate Without energetic and effective reaction the imposition of a political regime which is contrary to the vote of the majority of the people." If Italy were re- installed, the speaker said, " to any imposition of that kind we should be constrained to reply with extreme energy and with absolute intran- sigence." The speaker and editor were ordered imprisonment for one year, afterwards commuted to binding-over for two years. There would have been no prosecution in Britain.

Photographs taken for the British Administration by Italian photo.. graphers during the visit of the Enquiry Commision reveal no "storm troopers." They show pro-Ethiopian demonstrators without weapons. but Muslim League demonstrators carrying swords, and also knives or pistols at the belt. The Enquiry Commission reported the only person killed was a member of the pro-Ethiopia Party,, stabbed to death in Massawa. The British Senior Civil Affairs Officer stated that the dis- turbances leading to that murder were "provoked by the complete lack of tact and self-discipline of the Italian population."

The Pro-Ethiopia Party faced the Commission under difficulties, having no support among either British or Italian administrators. British officials had committed themselves to advocacy of British trusteeship, and there- fore favoured the Muslim League and the separatist Christian Party, adopting a partisan attitude unbecoming for officials of a caretaker Government. Eritreans state that at Teramni the pro-Ethiopia procession was provoked by repeated stone-throwing by the separatist Christian Party, led by former employees of the Italian administration, subsequently employed by the British. When Unionists' rank and file at last retaliated, they were charged by the police ; the aged abbots of the, monasteries of Enda Abuna Abranios and of Enda Abuna Ionas, also Abba Wolde Medhen and Abba Fessahaie, were hurled to the ground. These venerable ecclesiastics had taken no part in the conflict. At Addi Quala the pro- Ethiopia Party requested the police to remove firearms carried by six members of the separatist Christian Party, one of whom, Sebhatu, had acted as Civil Affairs Officer in Ethiopia under the Italians.

I repudiate the allegation of Mr. Wise that I regard pro-Italians as legitimate targets of persecution. I am opposed to personal violence.—