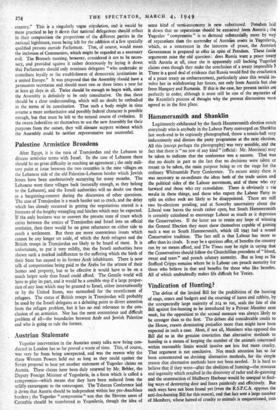 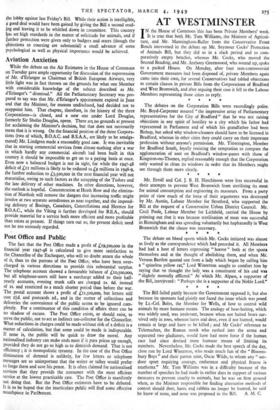 The defeat of the limited Bill for the prohibition of the hunting of stags, otters and badgers and the coursing of hares and rabbits; by the unexpectedly large majority of 214 to 101, seals the fate of the Bill against fox-hunting to be introduced by a Private Member next week, for the opposition to the second measure was always likely to be stronger than to the first. The debate did considerable credit to the House, reason dominating prejudice more than might have been expected in such a case. Most, if not all, Members who opposed the Bill did so in the genuine conviction that alternative methods to hunting as a means of keeping the number of the animals concerned within reasonable limits would involve not less but more cruelty. That argument is not conclusive. Not much attention has so far been concentrated on devising alternative methods, for the simple reason that alternative methods have not been needed. It is hard to believe that if they were—after the abolition of hunting—the resource and ingenuity which resulted in the discovery of radar and de-gaussing and the construction of Mulberry Harbour would be unequal to find- ing ways of destroying deer and foxes painlessly and effectively. But such ways have not been found yet (even the R.S.P.C.A. opposes the anti-fox-hunting Bill for this reason), and that fact sent a large number of Members, whose hatred of cruelty to animals is unquestioned, into

the lobby against last Friday's Bill. While their action is intelligible, a good deal would have been gained by giving the Bill a second read- ing and leaving it to be whittled down in committee. This country Ilas set high standards in the matter of solicitude for animals, and if further protection were •given only to badgers and otters (though the 4?bjections to coursing are substantial) a small advance of some psychological as well as physical importance would be achieved.