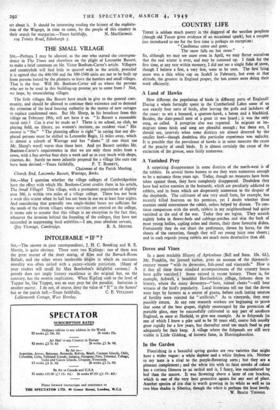 SIR,—Perhaps I may be allowed, as the one who started the correspon- dence in The Times and elsewhere on the plight of Letcombe Bassett, to make a brief comment on Mr. Victor Bonham-Carter's article. Villagers and countryfolk will find little to quarrel with in the article, provided it is agreed that the 400-500 and the 500-1500 units are not to be built up from persons forced by the planners to leave the hamlets and small villages. That is the fear. Will Mr. Bonham-Carter tell us where the persons who are to be used in this building-up process are to come from ? Not, we hope, by emasculating villages.

The little villages like Bassett have much to give to the general com- munity, and should be allowed to continue their existence and to demand the attention of the local housing authority in the matter of new cottages to replace condemned ones. But Mr. Sharp, in his broadcast from this village on February 19th, will not have it so. " Is Bassett a reasonable social unit ? Can it ever be made so ? There is no school, no club, no playing field, no library, no women's institute, no resident vicar." His answer is "No." " The planning officer is right" in saying that our dis- placed persons must be shifted to Letcombe Regis, 11 miles away, which is almost a suburb of Wantage and has " slums " (if one must use Mr. Sharp's word) worse than those here. And yet Bassett satisfies Mr. Bonham-Carter's requirements in that we are only three miles from a town, with a bus service four days a week and so in easy touch with shops, cinemas, &c. Surely no more infantile proposal for a village like ours can have been devised.—Yours faithfully, F. T. BmutErr, Chairman of the Parish Meeting.