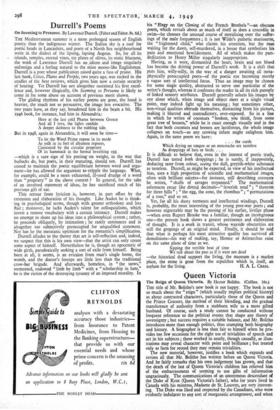 On Seeming to Presume. By Lawrence Munn. (Faber and Faber. 8s. 6d.)

THE Mediterranean summer is a more prolonged season of English poetry than the indigenous winter. The Italian sky is a roof for poetic heads in Lancashire, and poets of a North Sea neighbourhood write in the dialect of the lipsing, lapsing Aegean. So, for all its islands, temples, eternal vines, tin plates of olives, its static blueness, the work of Lawrence Durrell has an,icliom and image singularly unforeign and a feeling natural to the most moose-like Englishman. Durrell is a poet whose publication raised quite a fuss of praise. His last book, Cities, Plains and People, two years ago, was rocked in the cradles of the best reviews, which gives him now a certain security of hearing. Yet Durrell has not altogether sustained his first excel- lence and, however illogically, On Seeming to Presume is likely to come in for some abuse on account of previous merit shown.

The gliding rhythms of his earlier poems are gone, the hand is heavier, the touch not so persuasive, the image less evocative. The two years have, as they say, broadened him in the beam a bit. His 1946 book, for instance, had him in Alexandria:

Here at the last cold Pharos between Greece

And all I love, the lights confide A deeper darkness to the rubbing tide.

- To let the Word Prime repose in its mode

As yolk in its fort of albumen reposes, Contented by the circular propriety

Of its hammock in the formal breathing egg.

—which is a sure sign of his putting' on weight, in the way that bullocks do, but poets, in their maturing, should not. Durrell has ceased to maintain the poetic equilibrium between word and argu- ment—he has allowed the argument tocripple the language. What, for example, could be a more exhausted, ill-used drudge of a word than " propriety " in the above context ? In general, for the sake of an involved statement of ideas, he has sacrificed much of his previous gift of ear. This retreat from lyricism is, however, in part offset by the extension and elaboration of his thought. Like Auden he is think- ing in psychological terms, though with greater orthodoxy and less flair ; moreover, he lacks Atiden's talent for colloquialisms, which invest a remote vocabulary with a certain intimacy. Durrell makes no attempt to shore up his ideas into a philosophical system ; rather, he proceeds obliquely, by intimation • he rarely announces and is altogether too subjectively preoccupied for unqualified statement. Nor has he the messianic optimism for the romantic's simplification.

Durrell alludes to the theory that art is self-reflection and, indeed, we suspect that this is his own view—that the artist can only create some aspect of himself. Nevertheless he is, though an egocentric of wide girth, paradoxically seeking a sort of exile from himself. Being born at all, it seems, is an eviction from man's single home, the womb, and the doctor's forceps are little less than the traditional crow-bar brigade. And afterwards, homeless, in " the stews," tormented, endowed " limb by limb " with a " scholarship in hate," he is the victim of the destroying tyranny of an imposed morality. In

his " Elegy on the Closing of the French Brothels "—an obscure poem, which reveals about as much of itself as does a crocodile in swim—he chooses the unusual course of moralising over the suffer- ings of the male frequenters ; it is not Wilde's pathetic marionette, the "frightened child," who claims his attention, but the man waiting for the dawn, self-murdered, in a house that symbolises his pain and emotional bewilderment. All of which makes the part- dedication to Henry Nliller singularly inappropriate.

Having, as it were, dismantled the heart, brain and not blood has become the driving power of Durrell's work. It is a shift that puts him, willy-nilly, in the way of a danger awaiting all meta- physically preoccupied poets—of the poetic eye becoming merely a vague sort of intellectual focus. Thus an image may be chosen for some single quality, abstracted to serve one particular of the writer's thought, whereas it confronts the reader in all its rich panoply of linked sensory attrihutes. Durrell generally selects his images by eye alone which, when image and object meet at a single visual point, may indeed, light up his meaning ; but sometimes other, non-visual qualities obtrude themselves, distracting from his picture, making it blurred and contradictory, over-exposed. So in a line in which he writes of coconuts " broken, you think, from some great tree of breasts," while he is exact enough visually and in the fact that both coconuts and breasts are lactiferous, the whole image collapses on touch—as any crowing infant might enlighten him. Again, in the same poem we have : . . . the curds Which drying on tongue or on moustache are tasteless

It is difficult to believe that, even in the interest of poetic truth, Durrell has tasted both droppings • he is surely, if inappositely, deducing taste from colour, seeing the dull, greyish-white substance as tasteless. Durrell, as might be expected, in view of his intellectual bias, uses a high proportion of scientific and mathematical images, often with brilliant access—for instance, still describing coconuts he writes, " skulls of savages trepanned." The mathematical references recur like dotted decimals—" feverish total" ; " theorem for three hills " ; " the egg, the cone, the rhombus " ; " permutations of a rose," and so on.

Yet, for all his dusty torments and intellectual windings, Durrell is, probably, the most interesting of the young post-war poets ; and however regrettable may be the passing of his earlier, livelier phase when even Rupert Brooke was a familiar, though an incohgruous one—the present book shows a greater pertinence and elaboration of thought. It is a work in transit, whose wayside obscurities are still the gropings of an original mind. Finally, it should be said that what is perhaps his most attractive quality has survived all demolitions—his way of making, say, Homer or Aristarchus exist on the same plane of time as we.

—the historical dead support the living, the museum is a market place, the stone is gone from the sepulchre which is, itself, an