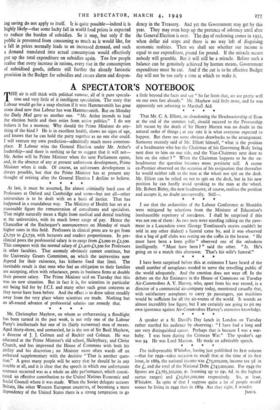 THE air is still thick with political rumour, all of it pure specula- tion and very little of it intelligent speculation. The story that Labour would go for a snap election if it won Hammersmith has gone stone dead now that Labour has won Hammersmith. But on Monday the Daily Mail gave us another one. "Mr. Attlee intends to lead the election battle and then retire from active politics." I do not believe it for a moment. Why should the Prime Minister do any- thing of the kind He is in excellent health, shows no signs of age, and knows that he can hold the party together as no one else could. I will venture my own prediction—admittedly much more common- place. If Labour wins the General Election under Mr. Attlee's leadership—and there is nothing so far to suggest that it will not— Mr. Attlee will be Prime Minister when the next Parliament opens, and, in the absence of any at present unforeseen development, Prime Minister when it ends. Of course, an unforeseen development is always possible, but that the Prime Minister has at present any thought of retiring after the General Election I decline to believe.