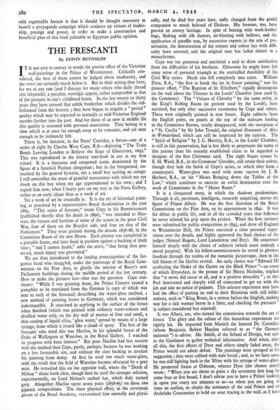 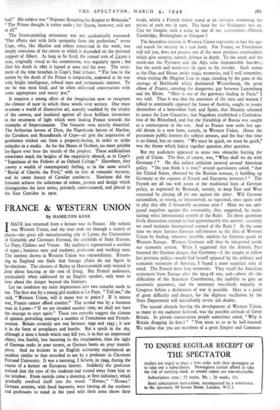 IT is not easy to convey in words the precise effect of the Victorian wall-paintings in the Palace of Westminster. Critically con- sidered, the best of them cannot be judged above mediocrity, and the worst are certainly much below it. But in their setting they have, for me at any rate (and I daresay for many others who daily thread this labyrinth), a peculiar, nostalgic appeal, rather comparable to that of the pictures in one's childhood home. In the last twenty or thirty years they have crossed that subtle borderline which divides the old- fashioned from the historic ; they have begun to acquire a " period " quality which may be expected to intensify as mid-Victorian England recedes further into the past. And for those of us now in middle life this quality is seasoned with personal association. They belong to a time which is at once far enough away to be romantic, and yet near enough to be intimately felt.

There is, for instance, in the Peers' Corridor, a fresco—one of a series of eight by Charles West Cope, R.A.—depicting " The Train Bands Leaving London to Relieve the Siege of Gloucester, 1643." This was reproduced in the history text-book in use at my first school. It is a fearsome and congested scene, dominated by the figure of a fanatical Puritan clergyman ; but in the foreground, un- touched by the general hysteria, sits a small boy sucking an orange. I still remember the sense of grateful reassurance with which my eye dwelt on this boy when my age approximated to his own ; and I regard him now, when I hurry past on my way to the Press Gallery, rather as an early chum than as a work of art.

Yet a work of art he assuredly is. It is the art of historical paint- ing, as practised by a representative Royal Academician in the year 1865. " This series of frescoes," wrote Cope in his Reminiscences (published shortly after his death in 189o), "was intended to illus- trate the virtues and heroism of some of the actors in the great Civil War, four of them on the Royalist side, and four on that of the Parliament." They were painted during the decade 1856-66, in the Committee Room of the new House. Each picture was completed in a portable frame, and later fixed in position against a backing of thick slate ; " and I cannot doubt," adds the artist, " that being thus pro- tected, much injury was prevented."

We are thus introduced to the leading preoccupation of the for- gotten band who struggled, under the patronage of the Royal Com- mission on the Fine Arts, to glorify the interior of Barry's new Parliament buildings during the middle period of the last century. How to make the pictures last—that was the question. Cope con- tinues : " While I was painting there, the Prince Consort caused a pamphlet to be translated from the German (a copy of which was sent to each of the frescanti) describing the water-glass method, a new method of painting fresco in Germany, which was considered indestructible. It consisted in applying to the surface of the fresco when finished (which was painted with ordinary water-colours and distilled water only, on the dry wall of mortar of lime and sand), a thin coating of liquid silica, ' glass water,' spread by means of a large syringe, from which it issued like a cloud of spray. The first of the frescanti who tried this was Maclise, in his splendid fresco of the Duke of Wellington at Waterloo, in the Royal Gallery. I watched its progress with keen interest." But poor Maclise had less success with the method than Cope, partly, perhaps, because he was working on a less favourable site, and without the slate backing to insulate his painting from damp. At first he used too much water-glass, with the result that the field of Waterloo became obscured by a grey mist. He remedied this on the opposite wall, where the " Death of Nelson " shone forth clear, though here he used the stronger solution, experimentally, on Lord Nelson's cocked hat, which duly turned grey. Altogether Maclise spent seven years (1858-65) on these two gigantic compositions. The sheer physical effort, in the cavernous gloom of the Royal Academy, overstrained him mentally and physi- cally, and he died five years later, sadly changed from the genial companion so much beloved of Dickens. His frescoes, too, have proved an uneasy heritage. In spite of beating with wash-leather bags, flicking with silk dusters, air-blasting with bellows, and the application of paraffin wax, by successive experts in the arts of pre- servation, the deterioration of the texture and colour has with diffi- culty been arrested, and the original tone has faded almost to a monochrome.

Cope was too generous and uncritical a soul to draw satisfaction from the difficulties of his brethren. Otherwise he might have felt some sense of personal triumph at the unrivalled durability of his Civil War series. Much else fell completely into ruins. William Dyce, R.A., " the first to break the ice in fresco painting," saw his pioneer effort, "The Baptism of St. Ethelbert," rapidly disintegrate on the wall above the Thrones in the Lords' Chamber (now used by the Commons). The " Virtues of Chivalry " by the same artist, in the King's Robing Room (at present used by the Lords), have survived, but only after successive treatments by Cope and others. These were originally painted in true fresco. Eight subjects from the English poets, on panels at the top of the staircase leading to the Committee Rooms, totally disappeared, with the exception of a " St. Cecilia " by Sir John Tenniel, the original illustrator of Alice in Wonderland, which can still be inspected by the curious. The " Spirit of Religion " by J. C. Horsley, R.A., in the Lords' Chamber, is still in fair preservation, but is less likely to perpetuate the name of this painter than his recently established claim to be regarded as designer of the first Christmas card. The eight Stuart scenes by E. M. Ward, R.A., in the Commons' Corridor, still retain their colour, though they lack the finish of Cope's series, to which they form a counterpart. Water-glass was used with some success by J. R. Herbert, ‘R.A., on his "Moses Bringing down the Tables of the Law," which continues to exercise an awful domination over the work of Committees in the " Moses Room."

It is a chequered story, in which the shadows predominate. Through it all, persistent, intelligent, earnestly enquiring, moves the figure of Prince Albert. He was the first chairman of the Royal Commission on the Fine Arts, on its appointment in 1841. It was his debut in public life, and in all the crowded years that followed he never relaxed his grip upon the project. When the first cartoons were submitted for public competition in 1843, and drew all England to Westminster Hall, the Prince exercised a close personal super- vision over the details, and highly approved the final choices of the judges (Samuel Rogers, Lord Lansdowne and Etty). He concerned himself deeply with the choice of subjects (which must embody a moral purpose). With his fellow-commissioners he roved in glorious freedom through the realms of the romantic picturesque, then in the full bloom of the Gothic revival. An early choice was " Edward III conferring the Order of the Garter on the Black Prince "—an event of which Dryasdust, in the person of Sir Harris Nicholas; implied that " it never did occur at all, and is a positive absurdity " ; so that Peel intervened and sharply told all concerned to get on with the job and take no notice of pedants. This salutary experience may have had the effect of putting an end to their flirtations with still wilder notions, such as "King Bruce, in a retreat before the English, making way for a sick woman borne in a litter, and checking the pursuers " (a subject considered but rejected).

It was Albert, too, who turned the commission towards the art of fresco. The glory and the odium of this hazardous experiment are rightly his. He imported from Munich the learned Dr. Cornelius (whom Benjamin Robert Haydon referred to as " the German nuisance ") to advise. Mr. Smith, of the School of Design, was sent to the Continent to gather technical information. And when, after all this, the first efforts of Dyce and others simply faded away, the Prince would not admit defeat. The paintings were sponged at his suggestion ; they were rubbed with stale bread ; and, as we have seen, he was still fighting back in the 'fifties with his syringe of water-glass. He promoted fresco at Osborne, whence Dyce (the chosen artist) wrote: " When you are about to paint a sky seventeen feet long by some four or five broad, I don't advise you to have a Prince looking in upon you every ten minutes or so—or when you are going to trace an outline, to obtain the assistance of the said Prince and an Archduke Constantine to hold UD your tracing to the wall, as I have

had." His subject was " Neptune Resigning his Sceptre to Britannia." " The Prince thought it rather nude ; the Queen, however, said not at all."

The fresco-painting movement was not academically esteemed. "Our efforts met with little sympathy from the profession," wrote Cope, who, like Maclise and others concerned in the work, was deeply conscious of the extent to which it depended on the personal support of Albert. As long as he lived, the annual sum of L4,000 a year, originally voted to the commission, was regularly spent ; but after his death in 186i it lapsed at once and for ever. The senti- ment of the time breathes in Cope's final tribute : "The loss to the nation by the death of the Prince is irreparable, endowed as he was with bright intelligence, refined taste and enthusiastic interest. To me he was most kind, and he often enlivened conversation with some appropriate and merry jest."

It requires a strong effort of the imagination now to recapture the climate of taste in which these words were written. One must re-create a world of illustrative art, scarcely troubled by the rivalry of the camera, and insulated against all those brilliant inventions in the treatment of light which were leading France towards the triumphs of Impressionism. The frescanti were strictly, theatrical. The Arthurian heroes of Dycc, the Napoleonic heroes of Maclise, the Cavaliers and Roundheads of Cope—all give the impression of gentlemen tricked out from a property-basket, in order to strike attitudes in a studio. As for the Moses of Herbert, no more pitiable lay figure ever bore the mantle of the prophet. These artificialities sometimes reach the heights of the exquisitely absurd, as in Cope's " Expulsion of the Fellows of an Oxford College." Elsewhere, they convey a wealth of contemporary feeling, as in the same artist's " Burial of Charles the First," with its hint of romantic mystery, and its sweet luxury of Cavalier sentiment. Nowhere did the frescanti achieve the coherence of colour, pattern and design which distinguishes the later series, privately commissioned, and placed in the East Corridor in two.