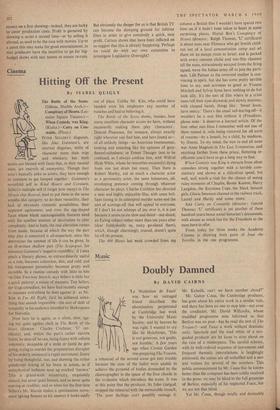 Hitting Off the Present

PETER SELLERS'S disguises, like Alec Guinness's, are internal disguises, shifts of character more than wigs and whiskers; but both actors are blessed with faces that, in their natural state, are marvels of anonymity. Though they aren't basically alike as actors, they have enough in common to get lumped together : Guinness's sevenfold self in Kind Hearts and Coronets, Sellers's multiple self (I forget how many) in The Mouse that Roared, tend to put them in the same amoeba-like category; so do their versatility, their lack of obviously romantic possibilities, their apparent agelessness, and even the egg-shaped faces whose blank unrecognisable features need only the smallest amount of decoration to alter completely. And in both, the real alteration comes from inside, because of which the way the part they play is conceived is all-important, since this determines the amount of life it can be given. In an ill-written shallow part (The Scapegoat, for instance) Guinness's 'negative capability,' if I may pinch a literary phrase, so extraordinarily useful as a rule, becomes colourless, dim, and cold, and his transparent personality becomes pretty well invisible. In a routine comedy with little to bite on (like Two-way Stretch, say) Sellers is little but a quick palterer, a mimic of manners. Top Sellers. the tragi-comedian, we have had recently enough to measure everything he does against it : as Mr. Kite in I'm All Right, Jack he achieved some- thing that sounds impossible--the sort of shift of sympathy in his audience intended by Shakespeare for Malvolio.

Now here he is again, as a silent, slow, age- ing but quite ageless clerk in The Battle of the Sexes (director : Charles Crichton; 'U' cer- tificate), and, within the part's rather narrow limits, he does all he can, being funny with infinite solemnity, incapable of a smile or (until he gets going, trying to murder the preposterous disrupter of his orderly existence) a rapid movement; funny by being thoughtful, too, and showing the rather ponderous ticking of his brain in action, as if metaphysical balloons went up marked 'THINKS.' This is grand-scale eccentricity, exquisitely absurd, but never quite human, and so never quite moving or credible; and so when for the first time Sellers's Mr. Martin makes a spontaneous move-. ment (giving flowers to his enemy) it looks oddly

out of place. Unlike Mr. Kite, who could have handed even his employers any number of bunches and had us believing it.

The Battle of the Sexes shows, besides, how many excellent character actors we have, without necessarily making them play 'characters': Donald Pleasance, for instance, always exactly right wherever you find him, and here found as— of all unlikely things—an American businessman, looking and sounding like the epitome of grey- flannel-suitedness; or Ernest Thesiger (not to be confused, as I always confuse him, with Wilfrid Hyde White, whom he resembles uncannily) dying from one last dram too many. Then there is Robert Morley, not so much a character actor as a personality actor, the same boisterous, all- enveloping presence coming through whatever character he plays. Charles Crichton has directed a neat and highly enjoyable film, with some bril- liant timing in its attempted murder scene and the sort of scorings-off that will appeal to everyone. If I don't let out whoops of joy over it, it is just because it seems to me slow and dated—out-dated; an Ealing subject rather more than ten years after (dear fuddyduddy us, nasty go-ahead them), which, though charmingly treated, doesn't quite hit off the present.

The 400 Blows last week crowded from my column a British film I wouldn't have spared two lines on if it hadn't been taken to heart in some surprising places. Muriel Box's Conspiracy of Hearts (director : Ralph Thomas; certificate) is about nuns near Florence who get Jewish child- ren out of a local concentration camp and set them on an escape route to Israel, and is packed with every convent cliché and war-film chestnut till the nuns, miraculously escaped from the firing squad, wave the Italian army of to join the parti- sans. Lilli Palmer as the reverend mother is con- vincing in spirit, but she has some pretty terrible lines to say, and actresses as good as Yvonne Mitchell and Sylvia Syms have nothing to do but look silly. It's the sort of film where in a crisis nuns roll their eyes skywards and slowly murmur, with clasped hands, things like : 'Sweet Jesus, have mercy.' There's the usual veil-tearing-off—it wouldn't be a nun film without it (Freudians, please note : it deserves a learned article. Of the four other nun films I remember well not one of them missed it, veils being removed for all sorts of reasons—by a lunatic, by a child, by madness, by illness). To my mind, the nun to end all nuns was Anna Magnani in The Last Temptation, and anything farther from these prissy, fluttering in- efficients you'd have to go a long way to find.

When Comedy was King is extracts from silent comedies strung together with a terrible com- mentary and shown at a ridiculous speed, but well, well worth a visit for the chance of seeing rainy moments of Chaplin, Buster Keaton, Harry Langdon, the Keystone Cops, the Mack Sennett girls, Gloria Swanson chained to the railway track, Laurel and Hardy and some more.

And Carry on Constable (director : Gerald Thomas; 'U' certificate) is yet another of these hundred-years-hence social historian's documents, with almost as much fun for the Freudians as the nuns have to offer.

From today for three weeks the Academy Cinema is showing both parts of Ivan the Terrible in the one programme.