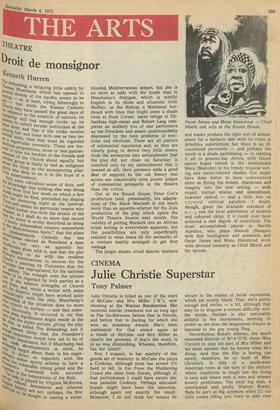 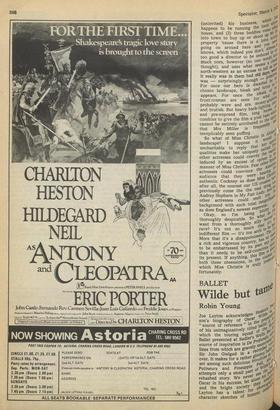 Julie Christie is billed as one of the stars of McCabe and Mrs Miller ('X '), now showing at the Warner Rendezvous. She received similar treatment not so long ago in The Go-Between, before that in Petit/fa, and before that in Darling for which she won an Academy Award. She's been nominated for that award again as a result of McCabe and Mrs Miller so clearly her prowess, if that's the word, is in no way diminishing. Wherein, therefore, lies her talent?

Not, I suspect, in her mastery of the gentle art of mimicry: in McCabe she plays a Cockney, although from her accent it's hard to tell. In Far From the Maddening Crowd she came from Dorset, although in that performance I could have sworn she was passable Cockney. Perhaps educated Dorset might have been the intention, although again not exactly the result. Moreover, I do not think her talents lie secure in the realms of facial expression, which are mostly blank. True, she's pretty enough and smiles — a bit, although that may be to disguise a certain difficulty with the words. Neither is she noticeably athletic in her movements, seeming to prefer as she does the langourous traipse as opposed to the gay young fling. Nevertheless Robert Altman, the much esteemed director of M*A*S*H, chose Miss Christie to play the part of Mrs Miller and we must assume that he knows what he's doing. And that the film is boring can surely, therefore, be no fault of Miss Christie's. It tells of a north-west American town at the turn of the century where conditions is rough but the living is easy and where men is men and women mostly prostitutes. The local big man, a constipated and porky Warren Beatty, finds he ain't so big anymore when (1) our Julie comes riding into town to take over (uninvited) his business, which happens to be running the local s"'",djii house, and (2) three baddies COflMr into town to buy up or shoot UP property 'cause there is a Iota oevel going on around here and Yee eaa is knows, which indeed you don't. Altie too good a director to be seduced Vito much corn, however (so one w°1114,0 thought), and uses what seems a north-western as an excuse to tell ilsocil it really was in them bad did daYe!mitiO was — surprisingly enough — Prt bi5 For once our hero is dwarfed 0Ys chosen landscape, bleak and bitter 1" appears. For once the ideals frontiersman are seen for vvita,,,` probably were and are, moneY;g„—over,, and, brutish. But heavy back and pre-exposed film,-lightitt, long lenSUsti' combine to give the film a Pink haze cannot be entirely attributed to the od that Mrs Miller is frequeatlY inexplicably seen puffing. So what of Miss Christie landscape? I suppose it 1°1151)0 uncharitable to reply that her qualities make her uniquely saitevoits other actresses could convey induced by an excess of 0Pitl". OtiO* manner of Miss Christie. Few other eio: actresses could convince the Affi,.,ag audience that they were authentic Cockney Cockney as does Miss after all, the nearest our US cousi% previously come the the real thAn11/bd fel Audrey Hepburn in My Fair LadY'.,to other actresses could melt background with such total insign as does England's newest sup ilerstar. Okay, so I'm being blifYdo 1151 thoroughly despicable. So 'Oa' P want from a thoroughly sillY IT/ it's,2111 rave? It's not so much that, be FA. indifferent film — it's too arch ict rit Tiled More that it's a disappointrneao a rich and vigorous countrY, lter'avy to be embarrassed by its Pest,„.-us than it needs to be self-coo both these obsessions, in the its present. If anything, this nirl/,atedti,t c.'rreierv which Miss Christie is trulY I fortunately.