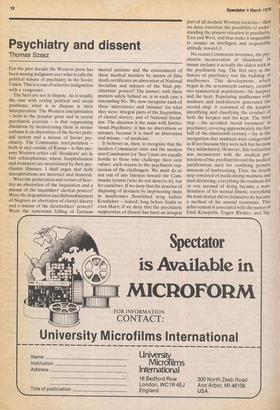 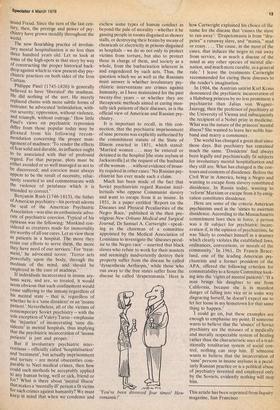 For the past decade the Western press has been waxing indignant over what it calls the political misuse of psychiatry in the Soviet Union. This is a case of selective indignation with a vengeance.

The facts are not in dispute. As is usually the case with vexing political and social problems, what is in dispute is their interpretation. The Western interpretation — both in the popular press and in recent psychiatric journals — is that suppressing dissidents by incarcerating them in insane asylums is an aberration of the Soviet political system and a misuse of Soviet psychiatry. The Communist interpretation — both in and outside of Russia — is that persons Western critics call 'dissidents' are in fact schizophrenics whose hospitalisation and treatment are necessitated by their psychiatric illnesses. I shall argue that both interpretations are incorrect and immoral.

Were the persecution and torture of heretics an aberration of the Inquisition and a misuse of the inquisitors' clerical powers? Were the degradation and disfranchisement of Negroes an aberration of chattel slavery and a misuse of the slaveholders' powers? Were the systematic killing of German mental patients and the concealment of these medical murders by means of false death certificates an aberration of National Socialism and misuses of the Nazi psychiatrists' powers? The answer, with these matters safely behind us, is in each case a resounding No. We now recognise each of these 'aberrations' and 'misuses' for what they were: integral parts of the Inquisition, of chattel slavery, and of National Socialism. The situation is the same with Institutional Psychiatry: it has no aberrations or misuses, because it is itself an aberration and misuse — of medicine.

It behoves us, then, to recognise that the modern Communist state and the modern non-Communist (or 'free') state are equally hostile to those who challenge their core values: each resorts to the psychiatric repression of the challengers. We must do so not out of any fairness toward the Communist tyrants (who do not deserve it), but for ourselves. If we deny that the practice of disposing of deviants by imprisoning them in madhouses flourished long before Krushchev — indeed, long before Stalin or even Marx; if we deny that the psychiatric suppression of dissent has been an integral

part of all modern Western societies — then we deny ourselves the possibility of understanding the present situation in psychiatry, East and West, and thus make it impossible to assume an intelligent and responsible attitude toward it.

No recent Communist invention, the psychiatric incarceration of 'dissidents' in insane asylums is actually the oldest trick in the psychiatric bag. The first step in the history of psychiatry was the building of madhouses. This development, which began in the seventeenth century, created two symmetrical populations: the keepers and the kept. Populating madhouses with madmen and mad-doctors generated the second step: it consisted of the keepers identifying and classifying the conduct of both the keepers and the kept. The third step — the so-called 'moral treatment' in psychiatry, covering approximately the first half of the nineteenth century — lay in the recognition that madmen were categorised as ill not because they were sick but because they misbehaved. However, this realisation was inconsistent with the medical pretensions of the psychiatrists and the medical justifications used for confining persons innocent of lawbreaking. Thus, the fourth step consisted of medicalising madness and mad-doctoring: everything the madman did or was accused of doing became a manifestation of his mental illness; everything the mad-doctor did or claimed to do became a method of his mental treatment. This achievement is associated with the names of Emil Kraepelin, Eugen Bleuler, and Sig

mund Freud. Since the turn of the last century, then, the prestige and power of psychiatry have grown steadily throughout the world.

The now flourishing practice of involuntary mental hospitalisation is no less than three hundred years old. Let us look at some of the high-spots in that story by way of constructing the proper historical backdrop against which to view present-day psychiatric practices on both sides of the Iron Curtain.

Philippe Pine! (1745-1826) is generally believed to have 'liberated' the madman. He did nothing of the sort. He merely replaced chains with more subtle forms of restraint: he advocated 'intimidation, without severity; oppression, without violence, and triumph, without outrage.' How little Pinel's views on psychiatric repression differ from those popular today may be gleaned from his following recommendation concerning the proper management of madmen: `To render the effects of fear solid and durable, its influence ought to be associated with that of profound regard. For that purpose, plots must be either avoided or so well managed as not to be discovered; and coercion must always appear to be the result of necessity, reluctantly resorted to and commensurate with the violence of petulance which it is Intended to correct.'

Benjamin Rush (1746-1813), the father of American psychiatry —his portrait adorns the seal of the American Psychiatric Association —was also an enthusiastic advocate of psychiatric coercion. Typical of his Opinions was the following: 'Mankind considered as creatures made for immortality are worthy of all our cares. Let us view them as patients in a hospital. The more they resist our efforts to serve them, the more they have need of our services.' For 'treat ment,' he advocated terror: 'Terror acts Powerfully upon the body, through the medium of the mind, and should be employed in the cure of madness.'

If individuals incarcerated in insane asylums were, and are, so treated, it would seem obvious that such confinement would cause suffering to the inmate regardless of his mental state — that is, regardless of whether he is a 'sane dissident' or an 'insane Patient.' Nevertheless, all of the victims of contemporary Soviet psychiatry — with the sole exception of Valery Tarsis —emphasise the 'injustice' of incarcerating 'sane dissidents' in mental hospitals, thus implying that the psychiatric incarceration of 'insane Patients' is just and proper.

But if involuntary psychiatric interventions — officially called 'hospitalisation' and 'treatment', but actually imprisonment and torture — are moral obscenities comparable to Nazi medical crimes, then how could such methods be acceptably applied to any human being, well or sick, friend or foe? What is there about 'mental illness' that makes a 'mentally ill' person a fit victim for such crimes against humanity? We must keep in mind that when we condemn and eschew some types of human conduct as beyond the pale of morality — whether it be gassing people in rooms disguised as shower stalls, or destroying their brains by means of chemicals or electricity in prisons disguised as hospitals — we do so not only to protect victims from torture, but also to protect those in charge of them, and society as a whole, from the barbarisation inherent in and engendered by such acts. Thus, the question which we as well as the Russians must answer is whether involuntary psychiatric interventions are crimes against humanity, as I have maintained for the past twenty-five years — or whether they are therapeutic methods aimed at curing men tally sick patients of their diseases, as is the official view of American and Russian psychiatry.

It is important to recall, in this connection, that the psychiatric imprisonment of sane persons was explicitly authorised by the commitment statute of the State of Illinois enacted in 1851, which stated: 'Married women . .. may be entered or detained in the hospital [the state asylum at Jacksonville] at the request of the husband of the woman. . . without evidence of insanity required in other cases.' No Russian psychiatrist has ever made such a claim. Much has been made of the fact that Soviet psychiatrists regard Russian intellectuals who oppose Communist slavery and want to escape from it as insane. In 1851, in a paper entitled 'Report on the Diseases and Physical Peculiarities of the Negro Race,' published in the then pre

ing as the chairman of a committee appointed by the Medical Association of Louisiana to investigate the 'diseases pecul iar to the Negro race' — asserted that black slaves who refuse to work for their masters and seemingly inadvertently destroy their property suffer from the disease he called 'dysaesthesia Aethiopis,' while those who run away to the free states suffer from the disease he called `drapetomania.' Here is how Cartwright explained his choice of the name for the disease that 'causes the slave to run away': `Drapetomania is from "drapetes" a runaway slave, and "mania," mad or crazy. ... The cause, in the most of the cases, that induces the negro to run away from service, is as much a disease of the mind as any other species of mental alienation, and much more curable, as a general rule.' I leave the treatments Cartwright recommended for curing these diseases to the reader's imagination.

In 1904, the Austrian satirist Karl Kraus denounced the psychiatric incarceration of a Habsburg princess by no less prominent a psychiatrist than ,Julius von WagnerJauregg, then the professor of psychiatry at the University of Vienna and subsequently the recipient of a Nobel prize in medicine. What was the nature of the princess' mental illness? She wanted to leave her noble husband and marry a commoner.

The world has changed a great deal since those days. But psychiatry has remained much the same. 'Dissidents' had always been legally and psychiatrically fit subjects for involuntary mental hospitalisation and they still are. What has changed is the contours and contents of dissidence. Before the Civil War in America, being a Negro and wanting to escape from slavery constituted dissidence. In Russia today, wanting to 'reform' Marxism or escape from it by emigration constitutes dissidence.

Here are some of the criteria American psychiatrists used in the 'sixties to ascertain dissidence. According to the Massachusetts commitment laws then in force, a person was a fit subject for psychiatric incarceration if, in the opinion of psychiatrists, he was 'likely to conduct himself in a manner which clearly violates the established laws., ordinances, conventions, or morals of the community.' In 1961, Dr Francis Braceland, one of the leading American psychiatrists and a former president of the APA, offered the following criterion for committability to a Senate Committee looking into the 'rights of mental patients': 'If a man brings his daughter to me from California, because she is in manifest danger of falling into vice or in some way disgracing herself, he doesn't expect me to let her loose in my hometown for that same thing to happen.'

could go on, but these examples are enough to emphasise my point. If someone wants to believe that the 'abuses' of Soviet psychiatry are the misuses of a medically and morally respectable system of healing rather than the characteristic uses of a traditionally totalitarian system of social control, nothing can stop him. If someone wants to believe that the incarceration of 'sane' persons in insane asylums is a peculiarly Russian practice or is a political abuse of psychiatry invented and employed only by the Soviets, evidently nothing will stop him.

`You've been divorced four times! How This article has been reprinted from Inquiry romantic!' magazine, San Francisco