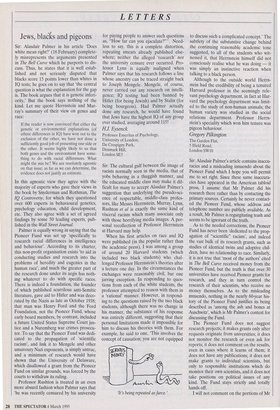 Sir: Alasdair Palmer in his article 'Does white mean right?' (18 February) complete- ly misrepresents the arguments presented in The Bell Curve which he purports to dis- cuss. Thus, he states that it is well estab- lished and not seriously disputed that blacks score 15 points lower than whites in IQ tests; he goes on to say that 'the central question is what the explanation for the gap is. The book argues that it is genetic inferi- ority,' But the book says nothing of the kind. Let me quote Herrnstein and Mur- ray's summary of their view on genes and race:

If the reader is now convinced that either the genetic or environmental explanations (of ethnic differences in IQ) have won out to the exclusion of the other, we have not done a sufficiently good job of presenting one side or the other. It seems highly likely to us that both genes and the environment have some- thing to do with racial differences. What might the mix be? We are resolutely agnostic on that issue; as far as we can determine, the evidence does not justify an estimate.

In this agnostic view they agree with the majority of experts who gave their views in the book by Snyderman and Rothman, The IQ Controversy, for which they questioned over 600 experts in behavioural genetics, psychology education, child development, etc. They also agree with a set of agreed findings by some 50 leading experts, pub- lished in the Wall Street Journal.

Palmer is equally wrong in saying that the Pioneer Fund was set up 'specifically to research racial differences in intelligence and behaviour'. According to its charter, this non-profit organisation exists `to aid in conducting studies and research into the problems of heredity and eugenics in the human race', and much the greater part of the research done under its aegis has noth- ing whatever to do with specific races. There is indeed a foundation, the founder of which published scurrilous anti-Semitic literature, gave aid to Hitler and was deco- rated by the Nazis as late as October 1938; that man was Henry Ford and the Ford Foundation, not the Pioneer Fund, whose early board members, by contrast, included a future United States Supreme Court jus- tice and a Nuremberg war crimes prosecu- tor. To say that the Pioneer Fund was dedi- cated to the propagation of 'scientific racism', and link it to Mengele and other unsavoury Nazi exponents, is simply untrue, and a minimum of research would have shown that the University of Delaware, which disallowed a grant from the Pioneer Fund on similar grounds, was forced by the courts to withdraw its ruling.

Professor Rushton is treated in an even more absurd fashion when Palmer says that `he was recently censured by his university for paying people to answer such questions as, "How far can you ejaculate?" ' . Need- less to say, this is a complete distortion, repeating smears already published else- where; neither the alleged 'research' nor the university censure ever occurred. Pro- fessor Lynn is equally maligned when Palmer says that his research follows a line whose ancestry can be traced straight back to Joseph Mengele. Mengele, of course, never carried out any research on intelli- gence; IQ testing had been banned by Hitler (for being Jewish) and by Stalin (for being bourgeois). Had Palmer actually done any research, he would have found that Jews have the highest IQ of any group ever studied, averaging around 115!