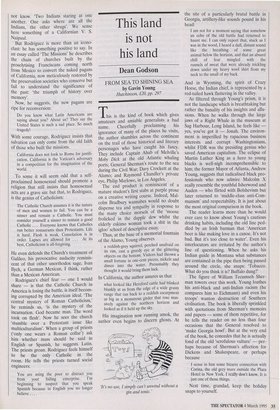 This land is not his land

FROM SEA TO SHINING SEA by Gavin Young Hutchinson, £20, pp. 297 This is the kind of book which gives amateurs and amiable generalists a bad name. Cheerfully proclaiming his ignorance of many of the places he visits, the author shambles across the continent on the trail of those historical and literary personages who have caught his fancy. They include Captain Ahab of Melville's Moby Dick at the old Atlantic whaling ports; General Sherman's route to the sea during the Civil War; Davy Crockett at the Alamo; and Raymond Chandler's private eye, Philip Marlowe, in Los Angeles.

The end product is reminiscent of a mature student's first stabs at purple prose on a creative writing course. Indeed, Mal- colm Bradbury wannabes would no doubt dispense tea and sympathy in response to the many choice morsels of the 'moose frolicked in the dapple dew whilst the elderly eskimo woman took a shit in the igloo' school of descriptive essay. Thus, at the base of a memorial fountain of the Alamo, Young observes

a reddish-grey squirrel, perched unafraid on its rim, cast a greedy eye at the glittering objects on the bottom. Visitors had thrown a small fortune in one-cent pieces, nickels and dimes into the water. Presumably they thought it would bring them luck.

In California, the author assures us that

what looked like Hereford cattle had blinked blankly at us from the edge of a wide grassy range that ran back to a reddish escarpment as big as a monstrous girder that rose mas- sively against the northern horizon and looked as if it held up the sky.

His imagination now running amok, the author even begins to discern ghosts. At It's no use, I simply can't unwind without a gin and tonic.' the site of a particularly brutal battle in Georgia, artillery-like sounds pound in his head:

I am not for a moment saying that somehow an echo of the old battle had returned to haunt me. I can only report that, stuck as I was in the wood, I heard a dull, distant sound like the breathing of some great animal below the horizon, and that an absurd chill of fear mingled with the runnels of sweat that were already trickling down under my heavy wool shirt from my neck to the small of my back.

And in Wyoming, the spirit of Crazy Horse, the Indian chief, is represented by a red-tailed hawk fluttering in the valley.

As filtered through Young's prism, it is not the landscape which is breathtaking but rather the banality of his insights and allu- sions. When he walks through the large jaws of a Right Whale in the museum at Sag Harbour, Long Island, he feels like - yes, you've got it — Jonah. The environ- ment is imperilled by rapacious business interests and corrupt Washingtonians, whilst FDR was the presiding genius who saved American capitalism. The eclipse of Martin Luther King as a hero to young blacks is well-nigh incomprehensible to him; the former Mayor of Atlanta, Andrew Young, suggests that radicalised black pro- fessionals who now admire Malcolm X really resemble the youthful Isherwood and Auden — who flirted with Bolshevism but later returned to 'middle-class anti-Com- munism' and respectability. It is just about the most original comparison in the book.

The reader learns more than he would ever care to know about Young's cautious drinking habits, including the old line ped- dled by an Irish barman that 'American beer is like making love in a canoe. It's not

bad. But it's too close to water'. Even his

interlocutors are irritated by the author's line of questioning. When he asks his Indian guide in Montana what substances are contained in the pipe then being passed around the circle, she snaps: 'Tobacco. What do you think it is? Buffalo dung?'

The figure of William Tecumseh Sher- man towers over this work. Young loathes his anti-black and anti-Indian racism (he compares him to Eichmann) and even his troops' wanton destruction of Southern civilisation. The book is liberally sprinkled with quotations from Sherman's memoirs and papers — some of them repetitive, for he tells the reader on no less than four occasions that the General resolved to

`make Georgia howl'. But at the very end of the book, he concedes that he is actually fond of the old 'scrofulous vulture' — per- haps because of Sherman's affection for Dickens and Shakespeare, or perhaps because I sense in him some bizarre connection with Corina, the old grey mare outside the Plaza Hotel in New York. I really-don't know. It is just one of those things.

Next time, grandad, keep the holiday snaps to yourself.