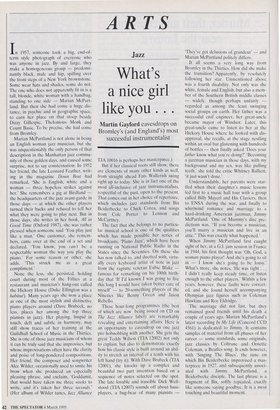 Martin Gayford eavesdrops on Bromley's (and England's) most successful instrumentalist

In 1957, someone took a big, end-of- term style photograph of everyone who was anyone in jazz. By and large, they make a homogeneous group — predomi- nantly black, male and hip, spilling over the front steps of a New York brownstone. Some wear hats and shades, some do not. The one who does not apparently fit in is a tall, blonde, white woman with a handbag. standing to one side — Marian McPart- land. But then she had come a huge dis- tance, in psychic and in geographic space, to earn her place on that steep beside Dizzy Gillespie, Thelonious Monk and Count Basic. To he precise, she had come from Bromley.

Marian McPartland is not alone in being an English woman jazz musician, but she was unquestionably the only person of that description in the Manhattan jazz commu- nity of those golden days, and caused some surprise, not to say consternation. In 1952 her friend, the late Leonard Feather, writ- ing in the magazine Down Beat had remarked, 'She is English, white and a woman — three hopeless strikes against her.' She remembers a gig at Birdland the headquarters of the jazz avant-garde in those days — at which the other players turned their hacks and refused to tell her what they were going to play next. But in those days, she writes in her hook, All in Good Time (Oxford 1987), she was rather pleased when someone said 'You play just like a man.' One customer, she remem- bers, came over at the end of a set and declared, 'You know, you can't be a respectable woman the way you play the piano.' For some reason or other, she adds, 'This struck me as a great compliment.'

None the less, she persisted, holding court during most of the Fifties at a restaurant and musician's hang-out called the Hickory House (Duke Ellington was a habitue). Many years ago she won a place as one of the most stylish and distinctive piano players around (Dave Brubeck, no less, places her among the top three pianists in jazz). Her playing, limpid in touch, deft and subtle in harmony, may still show traces of her training at the Guildhall School of Music in the Thirties. She is one of those jazz musicians of whom it can be truly said that she improvises, but whose improvisations often have the clarity and poise of long-pondered compositions. Her friend, the composer and songwriter Alec Wilder, occasionally used to smite his brow when she produced an especially pleasing phrase, and exclaim, `Goddamit, that would have taken me three weeks to write, and it's taken her three seconds.' (Her album of Wilder tunes, Jazz Alliance

TJA 10016 is perhaps her masterpiece.) But if her classical roots still show, there are elements of many other kinds as well, from straight ahead Fats Wallerish swing right up to today. She is in fact one of the most all-inclusive of jazz instrumentalists, respectful of the past, open to the present. That conies out in her choice of repertoire, which includes jazz standards from Bix Beiderbecke to Chick Corea, and songs from Cole Porter to Lennon and McCartney. The fact that she belongs to no particu- lar musical school is one of the qualities which has made possible her series of broadcasts, 'Piano Jazz', which have been running on National Puhlic Radio in the States since the Seventies. On these she has now talked to, and duetted with, virtu- ally every keyboard artist of note in jazz from the ragtime veteran Eubie Blake famous for remarking on his 100th birth- day that 'If I'd known I was going to live this long I would have taken better care of myself' — to 20-something players of the Nineties like Benny Green and Jason Rebello.

These hour-long programmes (the best of which are now being issued on CD on The Jazz Alliance label) arc remarkably revealing and entertaining affairs. Here is an opportunity to eavesdrop on one jazz pro hobnobbing with another. She gets the great Teddy Wilson (TJA 12002) not only to explain, but also to demonstrate exactly how his classic style is built around an abil- ity to stretch an interval of a tenth with his left hand (try it). With Dave Brubeck (TJA 12001), she knocks up a complex and beautiful two part invention based on a sequence of notes selected on the spot. The late lovable and irascible Dick Well- stood (TJA 12007) sounds off about bass- players, a hug-bear of many pianists —

`They've got delusions of grandeur' — and Marian McPartland politely differs.

It all seems a very long way from Bromley in the Thirties. How did she make the transition? Apparently, by resolutely following her star. Unmentioned above was a fourth disability. Not only was she white, female and English, but also a mem- ber of the Southern British middle classes — widely, though perhaps unfairly regarded as among the least swinging social groups on earth. Her father was a successful civil' engineer, her great-uncle became mayor of Windsor. Later, this great-uncle came to listen .to her at the Hickory House where he looked with dis- approval, she recalls, at the stage nestling within an oval bar glistening with hundreds of bottles — then finally asked 'Does your father know what you're doing'?' Becoming a jazzman musician in those days, with my background and my sex, was like pulling teeth,' she told the critic Whitney Balliett, `it just wasn't done.'

Understandably, her parents were star- tled when their daughter's music lessons led first to a music hall tour with a group called Billy Mayer] and His Claviers, then to ENSA during the war, and finally to whirlwind romance and marriage to a hard-drinking American jazzman, Jimmy McPartland. 'One of Mummy's dire pre- dictions was, "If you become a musician, you'll marry a musician and live in an attic." This was exactly what happened.'

When Jimmy McPartland first caught sight of her, at a GA,. jam session in France in 1944, his first thought was 'Oh, God, a woman piano player! And she's going to sit in — I know she's going to he lousy.' What's more, she notes, `He was right ... I didn't really keep steady time, or listen enough to the other players.' Within a few years, however, these faults were correct- ed, and she found herself accompanying Olympian jazz figures such as Coleman Hawkins and Roy Eldridge.

The marriage did not last, but they remained good friends until his death a couple of years ago. Marian McPartland's latest- recording In My Life (Concord CCD 4561) is dedicated to Jimmy. It contains samples of material from all phases of her career — some standards, some originals, jazz classics by Coltrane and Ornette Coleman, a Beatles song. It ends however, with 'Singing The Blues', the tune on which Bix Beiderbecke improvised a mas- terpiece in 1927, and subsequently associ- ated with Jimmy McPartland, a Beiderbecke disciple. The last phrase is a fragment of Bix, softly repeated, exactly like someone saying goodbye. It is a most touching and beautiful moment.