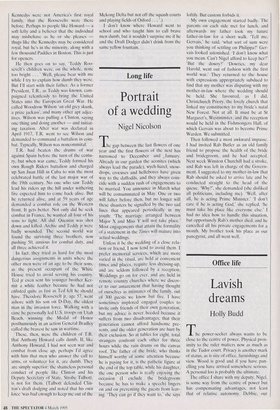 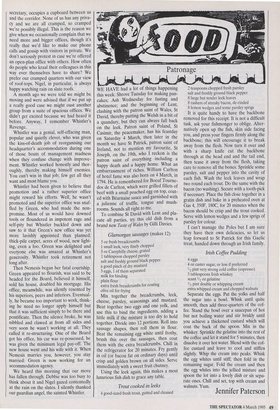 The power-seeker always wants to he close to the centre of power. Physical prox- imity to the ruler matters now as much as in the Tudor court. Privacy is another mark of status, as is size of office, furnishings and view. Wood is good and if you have pan- elling you have arrived somewhere serious. A personal loo is probably the ultimate.

The office I share with my deputy, Nigel, is some way from the centre of power but has compensating advantages, not least that of relative autonomy. Debbie, our secretary, occupies a cupboard between us and the corridor. None of us has any priva- cy and we are all cramped, so cramped we're possibly illegal. This is the reason we give when we occasionally complain that we need more and bigger offices, though it's really that we'd like to make our phone calls and gossip with visitors in private. We don't seriously protest in case we're offered an open-plan office with others. How often do people who kraal their colleagues in this way ever themselves have to share? We prefer our cramped quarters with our view of roof-tops. Nigel, in particular, is always happy watching rain on slate roofs.

A month ago we were told we might be moving and were advised that if we put up a really good case we might oust another group from a suite of spacious offices. We didn't get excited because we had heard it before. Anyway, I remember Whistler's Revenge.

Whistler was a genial, self-effacing man, popular and quietly clever, who was given the kiss-of-death job of reorganising our headquarter's accommodation during one of those bouts of management madness when they confuse change with improve- ment. Whistler worked honestly and thor- oughly, thereby making himself enemies. You can't win in that job; few get all they want and most blame you.

Whistler had been given to believe that promotion and a rather superior office might reward his efforts. Well, he wasn't promoted and the superior office was snaf- fled by Green, who had made the non- promise. Most of us would have downed tools or floundered in impotent rage and self-pity but Whistler buckled down and saw to it that Green's new office was yet more lavishly appointed than planned: thick-pile carpet, acres of wood, new light- ing, even a loo. Green was delighted and everyone else was amazed at Whistler's generosity. Whistler took retirement not long after.

Then Nemesis began her fatal courtship. Green appeared to flourish, was said to be headed for the Board, believed it himself, sold his house, doubled his mortgage. His office, meanwhile, was silently resented by his superiors, peers and inferiors. Eventual- ly, he became too important to work, think- ing he need no longer apply himself but that it was sufficient simply to be there and pontificate. Then the silence broke, he was nibbled and clawed at from all sides and very soon he wasn't working at all. They called it re-structuring. One of the Board got his office, his car was re-possessed, he was given the minimum legal pay-off. The new house went and his wife with it. When Nemesis marries you, however, you stay married: Green is now working for an accommodation agency.

We heard this morning that our move has fallen through. Debbie was too busy to think about it and Nigel gazed contentedly at the rain on the slates. I silently thanked our guardian angel, the sainted Whistler.