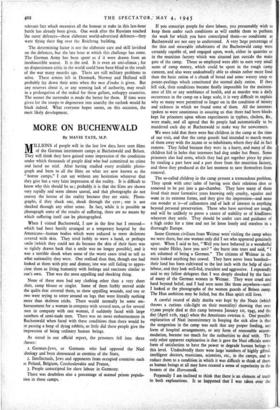 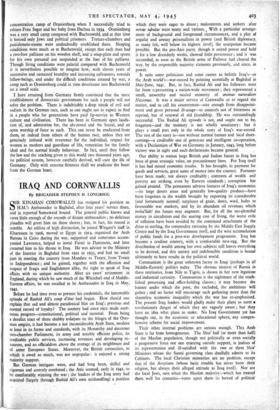 When I visited Buchenwald, I saw in the first but I entered— which had been hastily arranged as a temporary hospital by the Americans—human bodies which were reduced to mere skeletons covered with skin. They tried feebly to wave a hand, or perhaps smile (which they could not do because the skin of their faces was so tightly drawn back that a smile was no longer possible), and it was a terrible shock when some of the worst cases tried to tell us what nationality they were. One realised then that, though one had looked at them with pity and dismay; bne was still failing to appre- ciate them as living humanity with feelings and reactions similar to one's own. That was the most appalling and shocking thing.

None of these men had any clothing other than a very short shirt, camp blouse or singlet. Some of them feebly moved aside the quilts that covered them, to show appalling wounds, and one or two were trying to totter around on legs that were literally nothing more than skeleton sticks. There would normally be some em- barrassment for a woman in company with several men, or for several men in company with one woman, if suddenly faced with large numbers of semi-nude men. There was no more embarrassment in Buchenwald when faced with these conditions than there would be in passing a heap of dying rabbits, so little did these people give the impression of being ordinary human beings.

As stated in our official report, the prisoners fell into three classes: x. German-Jews, or Germans who had opposed the Nazi .deology and been denounced as enemies of the State, 2. Intellectuals, Jews and opponents from occupied countries such as Poland, Belgium, Czechoslovakia and France, 3. People conscripted for slave labour in Germany. There was doubtless also a percentage of normal prison popula- tion in these camps. If you conscript people for slave labour, you presumably wish to keep them under such conditions as will enable them to perform the work for which you have conscripted them—so conditions at Buchenwald are not easy to understand. A very large percentage of the thin and miserable inhabitants of the Buchenwald camp were certainly capable of, and engaged upon, work, either in quarries or in the munition factory which was situated just outside the main gate of the camp. Those so employed were able to earn very small sums of camp money, which could be spent in the rough camp canteen, and also were undoubtedly able to obtain rather more food than the basic ration of a chunk of bread and some watery soup or potato-peelings which constituted the normal daily ration. If they fell sick, then conditions became finally impossible for the mainten- ance of life or any semblance of health, and as murder was a daily occurrence in the camp on a large scale, it is very difficult to explain why so many were permitted to linger on in the condition of misery and sickness in which we found some of them. All the internees spoken to were unanimous in assuring us that there had been blocks kept for prisoners upon whom experiments in typhus, cholera, &c., were made, and all agreed that 8o people had automatically to be murdered each day at Buchenwald to make way for newcomers.

We were told that there were Boo children in the camp at the time of our visit, and that the camp guards had intended to march many of them away with the 2o,000 or so inhabitants whom they did in fact remove. They failed because they were in a hurry, and many of the children hid in holes that internees had dug under but floors. Some prisoners also had arms, which they had got together piece by piece by stealing a part here and a part there from the munition factory, and these they produced at the last moment to save themselves from removal.

The so-called children in the camp present a tremendous problem. They speak with utter calm of having seen their relations shot or removed to be put into a gas-chamber. They have many of them lived their most formative years knowing only cruelty, squalor and warm in its extreme forms, and they give the impression—and none can wonder at it—of callousness and of lack of interest in anything beyond personal preservation. Those who have survived are tough, and will be unlikely to prove a centre of stability or of kindliness wherever they settle. They should be under care and guidance of a high order for a time and not let loose lonely and stateless in a distraught Europe.

Some German civilians from Weimar were'visiting the camp when we were there, but one woman only did I see who appeared genuinely upset. When I said to her, " Well you have behaved in a wonderful way under Hitler, have you not? " she burst into tears and said, " I am ashamed of being a German." The citizens of Weimar in the main looked anything but cowed. They have never been bombed— their land has been cultivated to the last inch with the help of slave labour, and they look well-fed, truculent and aggressive. I repeatedly said to my fellow delegates that I was deeply shocked by the faces of many of the German women in Weimar. They were cruel and hard beyond belief, and I had seen none like them anywhere—until I looked at the photographs of the women guards of Belsen camp. The Hun ambition may be foiled, but the Hun spirit still lives.

A careful record of daily deaths was kept by the Nazis (which throws a curious side-light on their mentality) showing that over 17,000 people died at this camp between January xst, 1945, and the day (April xith, 1945) when the Americans overran it. One possible explanation of Nazi inconsistency in keeping the sick alive is that the congestion in the camp was such that any proper feeding, any form of hospital arrangements, or any form of reasonable accom- modation, became too much for the authorities to deal with. The only other apparent explanation is that it gave the Nazi officials some form of satisfaction to have the power to degrade human beings to this level. Undoubtedly there were large numbers of highly gifted. intelligent doctors, musicians, scientists, etc., in the camps, and tc reduce them to a condition in which it was difficult to think of them as human beings at all may have created a sense of superiority in the breasts of the Herrenvolk.

Perpanally I am inclined to think that there is an eleinent of truth in both explanations. It so happened that I was taken over the

concentration camp of Oranienburg when I successfully tried to release Frau Seger and her baby from Dachau in 1934. Oranienburg was a very small camp compared with Buchenwald, and at that time it housed only Jews and political prisoners. Torture-chambers and punishment-rooms were undoubtedly established there. Sleeping conditions were much as at Buchenwald, except that each man had a two-foot palliasse on his wooden shelf, and "a soup-plate and spoon for his own personal use suspended at the foot of his palliasse. Though living conditions were palatial compared with Buchenwald it is nevertheless possible to imagine how, with eleven years of successive and sustained brutality and increasing callousness towards fellow-beings, and under the difficult conditions created by war, a camp such as Oranienburg could in time deteriorate into Buchenwald on a small scale.

I have returned from Germany firmly convinced that the mere establishment of democratic government for such a people will not solve the problem. There is indubitably a deep streak of evil and sadism in the German race, such as one ought not to expect to find in a people who for generations have paid lip-service to Western culture and civilisation. There has been in Germany open lauda- tion of, and admiration for, the aboormal and the brutal, and an open worship of force as such. This can never be eradicated from them, or indeed from others of the human race, unless they are genuinely imbued with reverence for the individual, respect for women as mothers and guardians of life, veneration for the family ideal and for normal kindly behaviour. In fact, until they follow the law and the teaching given to this World two thousand years ago. no political system, however carefully devised, will cure the ills of Germany. Only with extreme firmness shall we eradicate the beast from the German heart.