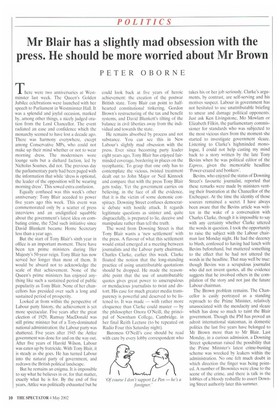 Mr Blair has a slightly mad obsession with the press. He should be more worried about Mr Brown

There were two anniversaries at Westminster last week. The Queen's Golden Jubilee celebrations were launched with her speech to Parliament in Westminster Hall. It was a splendid and joyful occasion, marked by, among other things, a nicely judged oration from the Lord Chancellor. The event radiated an ease and confidence which the monarchy seemed to have lost a decade ago. There was harmony everywhere, except among Conservative MPs, who could not make up their mind whether or not to wear morning dress. The modernisers wore lounge suits but a diehard faction, led by Nicholas Soames, did not. The previous day the parliamentary party had been paged with the information that while 'dress is optional, the leader of the opposition will be wearing morning dress'. This sowed extra confusion.

Equally confused was this week's other anniversary: Tony Blair acceded to power five years ago this week. This event was commemorated only by a scatter of press interviews and an undignified squabble about the government's latest idea on combating crime, the 52nd such initiative since David Blunkett became Home Secretary less than a year ago.

But the start of Tony Blair's sixth year in office is an important moment. There have been ten prime ministers during Her Majesty's 50-year reign. Tony Blair has now served her longer than most of them. It would be absurd not to acknowledge the scale of that achievement. None of the Queen's prime ministers has enjoyed anything like such a sustained period of public popularity as Tony Blair. None of her chancellors has presided over such a long and sustained period of prosperity.

Looked at from within the perspective of Labour party history, the achievement is yet more spectacular. Five years after the great election of 1929, Ramsay MacDonald was still prime minister but of a Tory-dominated national administration: the Labour party was shattered. Five years after 1945 the Attlee government was done for and on the way out. After five years of Harold Wilson, Labour was eaten up by fratricide. With Tony Blair, it is steady as she goes. He has turned Labour into the natural party of government, and redrawn the British political landscape.

But he remains an enigma. It is impossible to say what he believes in or, for that matter, exactly what he is for. By the end of five years, Attlee was politically exhausted but he could look back at five years of heroic achievement: the creation of the postwar British state. Tony Blair can point to halfhearted constitutional tinkering, Gordon Brown's restructuring of the tax and benefit systems, and David Blunkett's tilting of the balance in civil liberties away from the individual and towards the state.

He remains absorbed by process and not substance. You can see this in New Labour's slightly mad obsession with the press. Ever since becoming party leader eight years ago, Tony Blair has enjoyed fairminded coverage, bordering in places on the sycophantic. To grasp that one only has to contemplate the vicious, twisted treatment dealt out to John Major or Neil Kinnock and compare that with the press Tony Blair gets today. Yet the government carries on believing, in the face of all the evidence, that it is the victim of some demonic conspiracy. Downing Street confuses democratic debate with hostile attack. It regards legitimate questions as sinister and, quite disgracefully, is prepared to lie, deceive and manipulate rather than tell the truth.

The word from Downing Street is that Tony Blair wants a 'new settlement' with the press. A flavour of what this settlement would entail emerged at a meeting between journalists and the Labour party chairman, Charles Clarke, earlier this week. Clarke floated the notion that the long-standing practice of using unattributable quotations should be dropped. He made the reasonable point that the use of unattributable quotes gives great power to unscrupulous or mendacious journalists to twist and distort. His case for much greater media transparency is powerful and deserved to be listened to. It was made — with rather more eloquence than Clarke could muster — by the philosopher Onora O'Neill, the principal of Newnham College, Cambridge, in her final Reith Lecture (to be repeated on Radio Four this Saturday night).

takes his or her job seriously. Clarke's arguments, by contrast, are self-serving and his motives suspect. Labour in government has not hesitated to use unattributable briefing to smear and damage political opponents. Just ask Ken Livingstone, Mo Mowlam or Elizabeth Filkin, the parliamentary commissioner for standards who was subjected to the most vicious slurs from the moment she started to investigate government sleaze. Listening to Clarke's highminded monologue, I could not help casting my mind back to a story written by the late Tony Bevins when he was political editor of the Express, given the memorable headline 'Power-crazed and bankers'.

Bevins, who enjoyed the status of Downing Street's favourite journalist, reported that these remarks were made by ministers venting their frustration at the Chancellor of the Exchequer. At the time the identity of those sources remained a secret. I have always been aware that the Bevins article was written in the wake of a conversation with Charles Clarke, though it is impossible to say with any certainty whether Clarke uttered the words in question. I took the opportunity to raise the subject with the Labour chairman last Monday night. He had the decency to blush, confessed to having had lunch with Bevins beforehand, but muttered something to the effect that he had not uttered the words in the headline. That may well be true: though Bevins was a scrupulous journalist who did not invent quotes, all the evidence suggests that he involved others in the compilation of the story and not just the future Labour chairman.

The Brown problem remains. The Chancellor is easily portrayed as a standing reproach to the Prime Minister, relatively unassociated with the mendacity and sleaze which has done so much to taint the Blair government. Though the PM has proved an adroit international statesman, in domestic politics the last five years have belonged to Mr Brown more than to Mr Blair. Last Monday, in a curious admission, a Downing Street spokesman raised the possibility that the Prime Minister's latest crime-busting scheme was wrecked by leakers within the administration. No one felt much doubt in which direction the finger was being pointed. A number of Brownites were close to the scene of the crime, and there is talk in the lobbies of a bloody reshuffle to assert Downing Street authority later this summer.