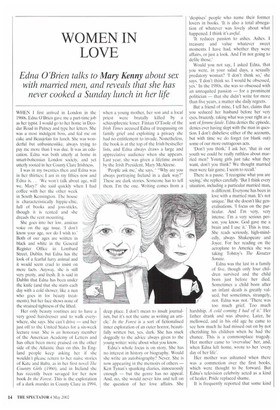 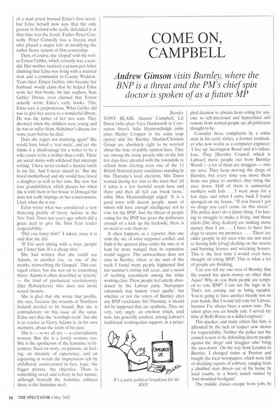 with married men, and reveals that she has never cooked a Sunday lunch in her life

WHEN I first arrived in London in the 1960s, Edna O'Brien gave me a part-time job as her typist. I would go to her home in Deodar Road in Putney and type her letters. She was a most indulgent boss, and fed me on cake and Beaujolais for lunch. She was wonderful but unbusinesslike, always trying to pay me more than 1 was due_ It was an education. Edna was both utterly at home in smart-bohemian London society, and yet utterly rooted in her County Clare Irishness.

I was in my twenties then and Edna was in her thirties; I am in my fifties now and Edna is.. . 'We won't talk about age, will we. Mary?' she said quickly when I had coffee with her the other week in South Kensington. The house is characteristically hippie-chic, full of hooks and joss-sticks, though it is rented and she dreads the rent mounting.

She goes into her low, anxious voice on the age issue. 'I don't know your age, nor do I wish to.' Both of our ages are written in black and white in the General Register Office in Lombard Street, Dublin, hut Edna has the look of a fearful furry animal and it would seem cruel to insist on mere facts. Anyway, she is still very pretty, and fresh. It is said in Dublin that Edna has been under the knife (and that she starts each day with a cold shower, like a nun who goes in for beauty treatments), but her face shows none of the strained tightness of the lifted.

Her only beauty routines are to have a very good hairdresser and to walk everywhere, she says. She can't drive — and her just off to the United States for a six-week lecture tour. She is an honorary member of the American Academy of Letters and has often been more praised on the other side of the Atlantic than on this. In England people keep asking her if she wouldn't please return to her naive stories of Kate and Baba, as in her first novel The Country Girls (1960), and in Ireland she has recently been savaged for her new book In the Forest. This is the exploration of a dark murder in County Clare in 1994, when a young mother, her son and a local priest were brutally killed by a schizophrenic loner. Fintan O'Toole of the Irish Times accused Edna of trespassing on family grief and exploiting a privacy she had no entitlement to invade. Nonetheless, the book is at the top of the Irish bestseller lists, and Edna always draws a large and appreciative audience when she appears. East year, she was given a lifetime award by the Irish President, Mary McAleese.

'People ask me,' she says, "Why are you always portraying Ireland in a dark way?" These are dark stories. Someone has to tell them. I'm the one. Writing comes from a

deep place. I don't mean to insult journalism, hut it's not the same as writing an article.In the Forest is a sort of fictionalised inner exploration of an outer horror, beautifully written but, yes, dark. She has stuck doggedly to the advice always given to the young writer: write about what you know.

Edna's whole focus is on story. She has no interest in history or biography. Would she write an autobiography? Never. She is now appearing in the memoirs of others — Ken Tynan's spanking diaries, innocuously enough — but the genre has no appeal. And, no, she would never kiss and tell on the question of her love affairs. She 'despises' people who name their former lovers in books. 'It is also a total abnegation of whatever was lovely about what happened. I think it's awful.

'It reduces passion to ashes. Ashes. I treasure and value whatever sweet moments I have had, whether they were affairs, or just a look. And I'm not going to defile those.'

Would you not say, I asked Edna, that you were, in your salad days, a sexually predatory woman? 'I don't think so,' she says. 'I don't think so. I would be obsessed, yes.' In the 1980s, she was so obsessed with an unrequited passion — for a prominent politician — that she didn't write for more than five years, a matter she daily regrets.

But a friend of mine, I tell her, claims that you seduced her husband before her very eyes, brazenly, taking what was your right as a sort offernrne fatale. Edna denies the episode, denies ever having slept with the man in question. I don't disbelieve either of the accounts, but with time we do forget (or blank out) some of our more outrageous acts.

'Don't you think,' I ask her, 'that in our youth we could be really ruthless about married men? Young girls just take what they want, don't you think? We thought married men were fair game, I seem to recall.'

There is a pause. 'I recognise what you are saying,' she replies carefully. 'But I think every situation, including a particular married man, is different. Everyone has been in love with a married man. It's not unique.' But she doesn't like generalisations. 'I focus on the particular. And I'm very, very intense. I'm a very serious person, you know. God gave me a brain and I use it.' This is true. She reads seriously, high-mindedly, always Shakespeare and Joyce. For her reading on the aeroplane to America she was taking Tolstoy's The Kreutzer Sonata.

Edna was the last in a family of five, though only four children survived and the child born just before her died. Sometimes a child born after an infant death is greatly valued, but sometimes, strangely, not. Edna was not. 'There was too much grief. Too much hardship. A cold coming I had of it.' Her father drank and was abusive. Later, he mellowed, and in his old age he came to see how much he had missed out on by not cherishing his children when he had the chance. This is a commonplace tragedy. Her mother came to 'overvalue' her, and, when Edna left home, wrote to her 'every day of her life'.

Her mother was ashamed when there was a commotion over the first books, which were thought to be forward. But Edna's television celebrity acted as a kind of healer. Pride replaced shame.

It is frequently reported that some kind of a mad priest burned Edna's first novel, but Edna herself now says that the only person in Ireland who really defended it at that time was the Jesuit, Father Peter Connolly. Peter Connolly was a literate man who played a major rule in modifying the rather fierce system of film censorship.

Then, of course, she 'eloped' with the writer Ernest Gebler, which certainly was a scandal. Her mother received a poison-pen letter claiming that Edna was living with a married man and a communist in County Wicklow. Years later, Ernest Gebler, who became her husband, would claim that he helped Edna write her first books: his late nephew, Stan Gebler Davies, even claimed that Ernest actually wrote Edna's early books. This, Edna says, is preposterous. What Gebler did was to give her access to a wonderful library. He was the father of her two sons. They divorced when the children were young and he was to suffer from Alzheimer's disease for some years before he died.

Does she regret not marrying again? She would have loved a 'real mate', and yet she thinks it a disadvantage for a writer to be a wife; easier to be a mother than a wife. There are social duties with wifehood that interrupt writing. 'I have never cooked a Sunday lunch in my life. And I never intend to.' But she loved motherhood and she would have loved a daughter as well as her sons. She now has four grandchildren, which pleases her when she is with them in her house in Donegal but does not really impinge on her consciousness, I feel, when she is not.

Edna wrote what was considered a very flattering profile of Gerry Adams in the New York Times ten years ago, which did a great deal to give the Sinn Fein leader respectability.

'Did you fancy him?' I asked, since it is said that she did.

If I'm seen sitting with a man, people say I fancy him. It's a cheap shot.'

She had written that she could see Adams, in another era, 'as one of the monks, transcribing the Gospels'. This outraged critics, but she was on to something there: Adams is often described as `priesty' — the kind of puritanical revolutionary (like Robespierre) who does not invite sexual favours.

She is glad that she wrote that profile, she says, because the wounds of Northern Ireland needed to be bound. But she is contradictory on this issue all the same. Edna says that she 'worships truth', but she is as evasive as Gerry Adams is, in his own memoirs, about the truth of his past.

She is — as we all are — a contradictory woman. But she is a lovely woman, too. She is the apotheosis of the feminine in literature: fixed on story, on passion, on feeling, on intensity of experience, and on capturing in words the impressions left by childhood; uninterested in fact, logic, the bigger picture, the objective. There is something sweet and velvety in her nature, although beneath the feminine softness there is the feminine steel.