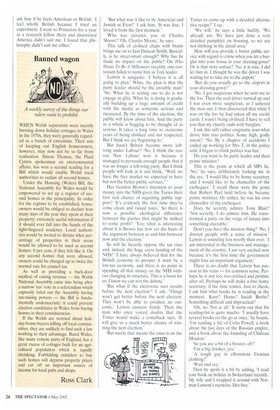 WHEN Welsh separatists were merrily burning down holiday cottages in Wales in the 1970s, they were generally regarded as a bunch of extremists. Their aim of keeping out English homeowners, however, may now not be so far from realisation. Simon Thomas, the Plaid Cymru spokesman on environmental affairs, has won a second reading for a Bill which would enable Welsh local authorities to outlaw all second homes.

Under the Housing (Wales) Bill, the National Assembly for Wales would be empowered to set up a register of second homes in the principality. In order for the register to be established, homeowners would be obliged to declare how many days of the year they spent at their property: extremely useful information if it should ever fall into the hands of the light-fingered tendency. Local authorities would be invited to dictate what percentage of properties in their areas would be allowed to be used as second homes: 0 per cent, if they felt like it. On any second homes that were allowed, owners could be charged up to twice the normal rate for council tax.

As well as providing a back-door method of raising revenue — the Welsh National Assembly came into being after a narrow 'yes' vote in a referendum which expressly ruled out the Assembly having tax-raising powers — the Bill is fundamentally undemocratic: it could prevent election candidates in Wales from buying homes in their constituencies.

If the Welsh are worried about holiday-home-buyers killing off local communities, they are unlikely to find such a law working to their advantage. Rural Wales, like many remote parts of England, has a great excess of cottages built for an agricultural population which is rapidly shrinking. Forbidding outsiders to buy such homes will depress property prices and cut off an important source of income for local pubs and shops.