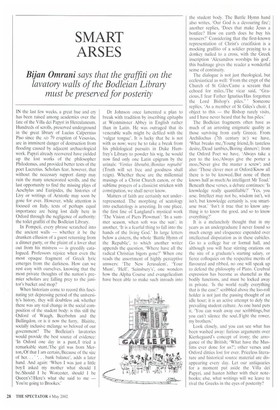 Bijan Omrani says that the graffiti on the

lavatory walls of the Bodleian Libraty must be preserved for posterity

IN the last few weeks, a great hue and cry has been raised among academics over the fate of the Villa dei Papyri in Herculaneum. Hundreds of scrolls, preserved underground in the great library of Lucius Calpernius Piso since the AD 79 eruption of Vesuvius, are in imminent danger of destruction from flooding caused by adjacent archaeological work. Papyri already recovered have yielded up the lost works of the philosopher Philodemus, and provided better texts of the poet Lucretius. Scholars fear, however, that without the necessary support damp may ruin the many unexcavated scrolls, and the last opportunity to find the missing plays of Aeschylus and Euripides, the histories of Livy or writings of Aristotle may soon be gone for ever. However, while attention is focused on Italy, texts of perhaps equal importance are being lost daily here in Oxford through the negligence of authority: the toilet graffiti of the Bodleian Library.

In Pompeii, every phrase scratched into the ancient walls — whether it be the drunken effusion of a guest returning from a dinner party, or the plaint of a lover shut out from his mistress — is greedily catalogued. Professors rejoice when even the most opaque fragment of Greek lyric emerges from the darkness. How can we rest easy with ourselves, knowing that the most private thoughts of the nation's premier scholars are falling prey to the janitor's bucket and mop?

When historians come to record this fascinating yet depressing period of the university's history, they will doubtless ask whether there was any real change in the social composition of the student body: is this still the Oxford of Waugh, Beerbohm and the Bullingdon, or is it now the furry, Blairite, socially inclusive mélange so beloved of our government? The Bodleian's lavatories would provide the best source of evidence: 'In Oxford one day in a punt,/ tried a remarkable stunt./The girl was from Merton,/Of that I am certain,/Because of the size of her.. . . . bank balance', adds a later hand. And again: 'When I was just a little boy/I asked my mother what should I be./Should I be Worcester, should I be Queen's?/Here's what she said to me — You're going to Brookes.'

Dr Johnson once lamented a plan to break with tradition by inscribing epitaphs at Westminster Abbey in English rather than in Latin. He was outraged that its venerable walls might be defiled with the 'vulgar tongue'. It is lucky that he is not with us now; were he to take a break from his philological pursuits in Duke Humfrey's Library to powder his wig, he would now find only one Latin epigram by the urinals: Wernas liberabit,IBonitas regnabit' (Truth will set free and goodness shall reign). Whether these are the millennial musings of a Christ Church canon, or the sublime prayers of a classicist stricken with constipation, we shall never know.

Matters of faith are certainly not underrepresented. The morph ing of scatology into eschatology is arresting. In one place, the first line of Langland's mystical work The Vision of Piers Plowman': 'In a summer season, when soft was the sun'; in another, it is a fearful thing to fall into the hands of the living God.' In large letters below a cistern, the whole 'Battle Hymn of the Republic', to which another writer appends the question, 'Where have all the radical Christian bigots gone?' When one reads the assortment of highly perceptive answers: 'The New Jerusalem', 'Your Mum', 'Hell', 'Sainsbury's', one wonders how the Alpha Course and evangelicalism have been able to make such inroads into the student body. The Battle Hymn hand also writes, 'Our God is a devouring fire'; another replies, 'Does that make Jesus a bonfire? How on earth does he buy his trousers?' Considering that the first-known representation of Christ's crucifixion is a mocking graffito of a soldier praying to a donkey nailed to a cross, with the Greek inscription `Alexandros worships his god', this badinage gives the reader a wonderful sense of continuity.

The dialogue is not just theological, but ecclesiastical as well: 'From the crypt of the Church of St Giles/Came a scream that echoed for miles./The vicar said, -Gracious./I fear Father Ignatius/Has forgotten the Lord Bishop's piles." ' Someone replies, 'As a member of St Giles's choir. I object to this — the Bishop rarely visits, and I have never heard that he has piles.'

The Bodleian fragments often have as much of an arresting enigmatic quality as those surviving from early Greece. From Archilochus (7th century BC) we have, 'What breaks me,/Young friend,/Is tasteless desire,/Dead iambics,/Boring dinners'; from the Oxford Poet we have, 'Always take a pen to the loo,/Always give the porter a moo,/Never give the master a screw'; and also: 'Those clever men at Oxford/Know all there is to be knowed./But none of them knows half as much/As intelligent Mr Toad.' Beneath these verses, a debate continues: 'Is knowledge really quantifiable?"Yes, you arse. Intellect may not be, wisdom isn't, wit isn't, but knowledge certainly is, you smartarse twat,' 'Isn't it true that to know anything is to know the good, and so to know everything?'

It is a melancholy thought that in my years as an undergraduate I never found so much energy and eloquence expended over intellectual disputation as in these cubicles. Go to a college bar or formal hall, and although you will hear stirring orations on the size of a graduate's starting salary, or fierce colloquies on the respective merits of flavoured and ribbed, no one will speak up to defend the philosophy of Plato. Cerebral expression has become as shameful as the bodily functions, and must be locked away in private. 'Is the world really everything that is the case?' scribbled above the loo-roll holder is not just the passing thought of an idle hour; it is an active attempt to defy the prevailing student culture. As one hand puts it, 'You can wash away our scribblings,/but you can't silence the soul./Fight the rower, my brothers.'

Look closely, and you can see what has been washed away: furious arguments over Kierkegaard's concept of irony; the arrogance of the British; 'What have the Muslims ever done for us?'; other verses and Oxford ditties lost for ever. Priceless literature and historical source material are disappearing every day. Let our antiquaries for a moment put aside the Villa dei Papyri, and hasten hither with their notebooks; else, what writings will we leave to rival the Greeks in the eyes of posterity?