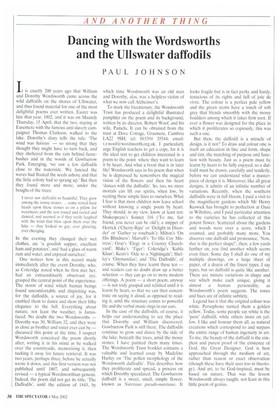 Dancing with the Wordsworths and the Ullswater daffodils

It is exactly 200 years ago that William and Dorothy Wordsworth came across the wild daffodils on the shores of Ullswater, and thus found material for one of the most delightful poems ever written. Easter was late that year, 1802, and it was on Maundy Thursday, 15 April, that the two, staying at Eusemere with the famous anti-slavery campaigner Thomas Clarkson, walked to the lake. Dorothy's diary tells the tale: 'The wind was furious' — so strong that they thought they might have to turn back, and they sheltered from the rain behind furzebushes and in the woods of Gowbarrow Park. Emerging, `we saw a few daffodils close to the waterside. We fancied the waves had floated the seeds ashore and that the little colony had so sprung up.' But then they found more and more, under the boughs of the trees: I never saw daffodils so beautiful. They grew among the mossy stones . . . some rested their heads upon these stones as on a pillow for weariness: and the rest tossed and reeled and danced, and seemed as if they verily laughed with the wind that blew upon them over the lake — they looked so gay, ever glancing, ever changing.

In the evening they changed their wet clothes, ate 'a goodish supper, excellent ham and potatoes', and 'had a glass of warm rum and water, and enjoyed ourselves'.

One notices how in this record made immediately after the event Dorothy, who. as Coleridge noted when he first met her, had an extraordinarily observant eye, grasped the central point of the experience. The storm of wind which human beings found uncomfortable and dispiriting was, for the daffodils, a source of joy, for it enabled them to dance and show their lithe elegance to the full. Everything about nature, not least the weather, is Janusfaced. No doubt the two Wordsworths — Dorothy was 30, William 32, and they were as close as brother and sister ever can be — discussed this point at the time. I suspect Wordsworth conceived the poem shortly after, writing it in his mind as he walked over the countryside, memorising it, then tucking it away for future retrieval. It was two years, perhaps three, before he actually wrote it down, and this first version was not published until 1807, and subsequently revised — a typical Wordsworthian genesis. Indeed, the poem did not get its title. `The Daffodils', until the edition of 1843, by which time Wordsworth was an old man and Dorothy, alas, was a helpless victim of what we now call Alzheimer's.

To mark the bicentenary, the Wordsworth Trust has produced a delightful illustrated pamphlet on the poem and its background, written by its director, Robert Woof, and his wife, Pamela. It can be obtained from the trust at Dove Cottage, Grasmere, Cumbria LA22 9SH; tel: 015394 35544; email: v.r.woof@wordsworth.org.uk. I particularly urge English teachers to get a copy, for it is the ideal text to get children interested in a poem to the point where they want to learn it by heart. And what a boon that is in later life! Wordsworth says in his poem that when he is depressed he remembers the magical vision of the flowers and then his heart 'dances with the daffodils'. So, too, we mere mortals can lift our spirits, when low, by reciting these simple lines to ourselves. What I fear is that most children now leave school without knowing a single poem by heart. They should. in my view, know at least ten: Shakespeare's Sonnet 104 ('To me, fair friend, you never can be old); a snippet of Herrick (`Cherry-Ripe' or 'Delight in Disorder' or Gather ye rosebuds'); Milton's `On His Blindness'; Marvell's 'To His Coy Mistress': Gray's 'Elegy in a Country Churchyard': Blake's 'Tiger': Coleridge's `Kubla Khan'; Keats's 'Ode to a Nightingale'; Shelley's `Ozymandias'; and 'The Daffodils', of course. When they have learnt these ten — and readers can no doubt draw up a better selection — they can go on to more modern offerings. A poem — a short poem, anyway — is not truly grasped and relished until it is learnt by heart, so that we can then concentrate on saying it aloud, as opposed to reading it, until the structure comes to powerful life and the verbal music rings in our ears.

In the case of the daffodils, of course, it helps our understanding to see the place that Dorothy and William discovered. Gowbarrow Park is still there. The daffodils continue to grow and dance by the side of the lake, beneath the trees, amid the mossy stones. I have painted them many times. The Wordsworth Trust booklet contains a valuable and learned essay by Madeline Harley on 'The pollen morphology of the Wordsworth daffodils'. This describes how they proliferate and spread, a process on which Dorothy speculated. The Gowbarrow daffodil is a sweet, small, simple flower, known as Narcissus pseudo-narcissus. It looks fragile but is in fact perky and hardy, tenacious of its rights and full of joie de vivre. The colour is a perfect pale yellow and the green stems have a touch of soft grey that blends smoothly with the mossy boulders among which it takes firm root. If ever a flower was designed for the place in which it proliferates so copiously, this was such a one.

But then, the daffodil is a miracle of design, is it not? To draw and colour one is itself an education in line and form, shape and tint, the matching of purpose and function with beauty. Just as a poem must be learnt by heart to be fully enjoyed, so a daffodil must be drawn, carefully and tenderly, before we can understand what a masterpiece of design it is. Moreover, like all great designs, it admits of an infinite number of variations. Recently, when the southern daffodils were in full bloom, I paid a visit to the magnificent gardens which Mr Henry Keswick has brought to perfection at Oare in Wiltshire, and I paid particular attention to the varieties he has collected of this potent flower. Scattered about the gardens and woods were over a score. which I counted, and probably many more. You discover one daffodil and pronounce, 'Now, that is the perfect shape!', then, a few yards further on, you find another which seems even finer. Some day I shall do one of my multiple drawings, on a large sheet of paper. of a dozen of the finest types. I say types, but no daffodil is quite like another. There are minute variations in shape and size which make each unique, giving it almost a human personality. as Wordsworth's poem suggests. The tones and hues are of infinite subtlety.

Legend has it that the original colour was white. Persephone turned them a golden yellow. Today, some people say white is the 'pure' daffodil, while others insist on yellow. I like and honour them all, as natural creations which correspond to and surpass the entire range of human ingenuity in art. To me, the beauty of the daffodil is the simplest and purest proof of the existence of God. the Great Designer. God is best approached through the medium of art, rather than reason or exact observation (though these have their uses too in theology). And art, to be God-inspired, must be based on nature. That was the lesson Wordsworth always taught, not least in this little poem of genius.