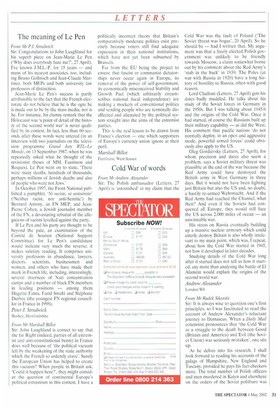 The meaning of Le Pen

From Mr P.J. Strudwick Sir: Congratulations to John Laughland for his superb piece on Jean-Marie Le Pen (Why does everybody hate me?", 27 April). I've known J.M.L.-P. for 15 years — and many of his nearest associates, too, including Bruno Gollnisch and Jean-Claude Martinez, both MEPs and both university law professors of distinction.

Jean-Marie Le Pen's success is partly attributable to the fact that the French electorate do not believe that he is the ogre he is made out to be by the mass media; nor is he. For instance, his clumsy remark that the Holocaust was 'a point of detail of the history of the second world war' is never qualified by its context. In fact, less than 60 seconds after these words were uttered (in an interview with two journalists on the television programme Grand July RTL–Le Monde, on 13 September 1987, when he was repeatedly asked what he thought of the revisionist theses of MM. Faurisson and Rogues), Le Pen went on to state, 'There were many deaths, hundreds of thousands, perhaps millions of Jewish deaths and also of people who were not Jews.'

In October 1997, the Front National published a pamphlet, 'Ni racisre, ni antisemite' ('Neither racist, nor anti-Semitic') by Bernard Antony, an FN MEP, and JeanPierre Cohen, a Jewish journalist member of the FN, a devastating rebuttal of the allegations of racism levelled against the party.

If Le Pen and his party are thought to be beyond the pale, an examination of the Comite de Soutien (National Support Committee) for Le Pen's candidature would indicate very much the reverse; it makes salutary reading. It comprises university professors in abundance, lawyers, doctors, scientists, businessmen and women, and others who have made their mark in French life, including, interestingly, several internees of Nazi concentration camps and a number of black FN members in leading positions — among them Hugette Fatna, Farid Smahi and Stephane Durbec (the youngest FN regional councillor in France in 1998).

From Mr Marshall Billot Sir: John Laughland is correct to say that the far Right (indeed, parties of all extremist and anti-constitutional bents) in France does well because of 'the political vacuum left by the weakening of the state authority which the French so ardently crave'. Surely the European Union has helped to create this vacuum? When people in Britain ask, 'Could it happen here?', they might consider the question of continental Europe's political extremism in this context. I have a politically incorrect theory that Britain's comparatively moderate politics exist precisely because voters still find adequate expression in their national institutions, which have not yet been subsumed by Brussels.

Far from the EU being the project to ensure that fascist or communist dictatorships never occur again in Europe, its removal of the power of self-government, its economically misconceived Stability and Growth Pact (which arbitrarily circumscribes national fiscal independence) are making a mockery of conventional politics and sending people who are terminally disaffected and alienated by the political system straight into the arms of the extremist parties.

This is the real lesson to be drawn from France's election one which supporters of Europe's currency union ignore at their peril.