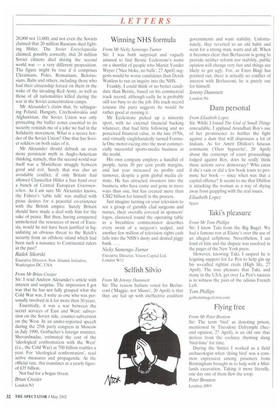 From Mr Nicky SamengoTurner Sir: I was both surprised and vaguely amused to find Bernie Ecclestone's name on a shortlist of people who Martin Vander Weyer (Nice bloke, no balls'. 27 April) suggests would be worse candidates than Derek Wanless to run an inquiry into the NHS.

Frankly, I could think of no better candidate than Bernie, based on his commercial track record, although sadly he is probably still too busy to do the job. His track record (excuse the pun) suggests he would be rather good at running it.

Mr Ecclestone picked up a minority sport, with no external financial backing whatever, that had little following and no perceived financial value, in the late 1970s. and virtually singlehandedly turned Formula One motor-racing into the most commercially successful sports-media business in the world.

His own company employs a handful of people, turns 30 per cent profit margins, and last year increased its profits and turnover, despite a grim global media climate. He has attracted investors into the business, who have come and gone in more ways than one, but has created more than US$2 billion for himself in the process.

Just imagine turning on your television to see a group of garishly clad surgeons and nurses, their overalls covered in sponsors' logos, clustered round the operating table as a breathless commentator describes every swish of a surgeon's scalpel, and another few million of television rights cash falls into the NHS's dusty and dented piggy bank. . . .