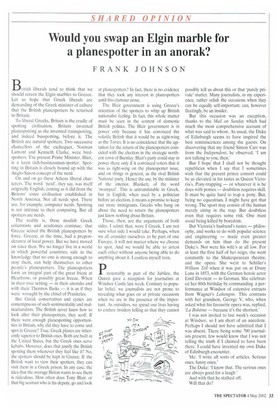 Would you swap an Elgin marble for a planespotter in an anorak?

British liberals tend to think that we should return the Elgin marbles to Greece. Let us hope that Greek liberals are demanding of the Greek minister of culture that the British planespotters be returned to Britain.

To liberal Greeks. Britain is the cradle of spotting civilisation. Britain invented planespotting as she invented trainspotting, and indeed busspotting, before it. The British are natural spotters. Two successive chancellors of the exchequer, Norman Lamont and Kenneth Clarke, were birdspotters. The present Prime Minister, Blair, is a keen rich-businessman-spotter, Spotting in Britain is closely bound up with the Anglo-Saxon concept of the nerd.

On and on go these Athens liberal chatterers. The word 'nerd', they say, was itself originally English, coming as it did from the Britons' sister civilisation established in North America. Not all nerds spot. There are, for example, computer nerds. Spotting is not intrinsic to their computing. But all spotters are nerds.

The reality is, these modish Greek columnists and academics continue, that Greece seized the British planespotters by force. Greece, at the time, had a preponderance of local power. But we have moved on since then. We no longer live in a world in which powerful countries, safe in the knowledge that no one is strong enough to stop them, can help themselves to other people's planespotters. The planespotters form an integral part of the great frieze at Heathrow, or possibly great freeze. When in their true setting — in their anoraks and with their Thermos flasks — it is as if they were wrought by the chisel of Praxiteles.

But Greek conservatives and cynics are contemptuous of such sentimentality and multiculturalism. The British never knew how to look after their planespotters, they scoff, If there were enough planespotting opportunities in Britain, why did they have to come and spot in Greece? True, Greek planes are inherently superior to British ones. Both are built in the United States, but the Greek ones serve kebabs. However, does that justify the British spotting them whenever they feel like it? No, the spotters should be kept in Greece. If the British want to view their spotters, they can visit them in a Greek prison. In any case, the idea that the average Briton wants to see them is ridiculous. How often does Tony Blair, or that big seaman who is his deputy, go and look at planespotters? In fact, there is no evidence that they took any interest in planespotters until this clamour arose.

The Blair government is using Greece's retention of the spotters to whip up British nationalist feeling. In fact, this whole matter must be seen in the context of domestic British politics. The Blair government is in power only because it has convinced the volatile British that it would be as right-wing as the Tories. It is no coincidence that the agitation for the return of the planespotters coincided with the election in the strategic northern town of Burnley. Blair's party could stay in power there only if it convinced voters that it was as right-wing on the planespotter issue, and on things in general, as the rival British National party. Hence the use, by the minister of the interior, Blunkett, of the word 'swamped'. This is untranslatable in Greek, but in English, when used by a politician before an election, it means a promise to keep Out more immigrants. Greeks who bang on about the need to return the planespotters just know nothing about Britain.

Those, then, are the arguments of both sides. I admit that, were I Greek. I am not sure what side I would take. Perhaps, when we all consider ourselves to be part of one Europe, it will not matter where we choose to spot. And we would be able to arrest each other without anyone being able to do anything about it. I confess myself torn.

Presumably as part of the Jubilee, the Queen gave a reception for journalists at Windsor Castle last week. Contrary to popular belief, we journalists are not prone to revealing what goes on at private occasions when we are in the presence of the important. As outsiders, we spend our lives having to endure insiders telling us that they cannot

possibly tell us about this or that 'purely private' matter. Many journalists, in my experience, rather relish the occasions when they can be equally self-important; can, however fleetingly, be an insider.

But this occasion was an exception, thanks to the Mail on Sunday which had much the most comprehensive account of what was said to whom. As usual, the Duke of Edinburgh seems to have inspired the best reminiscences among the guests. On discovering that my friend Simon Carr was from the Independent, he observed, 'I am not talking to you, then.'

But I hope that I shall not be thought republican when I say that I sometimes wish that the present prince consort could be as elevated in his tastes as Queen Victoria's. Pony-trapping — or whatever it is he does with ponies — doubtless requires skill. It must be quite hard to trap a pony. But, being no equestrian, I might have got that wrong. The sport may consist of the human merely sitting in the trap. But doubtless even that requires some risk. One must avoid being killed by boredom.

But Victoria's husband's tastes — philosophy, and works to do with popular science and engineering — made even greater demands on him than do the present Duke's. Nor were his wife's at all low. For at least the first half of her reign, she went constantly to the Shakespearean theatre, and the opera. She went to Schiller's William Tell when it was put on at Drury Lane in 1853, with the German heroic actor Emil Devrient — in German. She celebrated her 80th birthday by commanding a performance at Windsor of extensive extracts from Wagner's Lohengrin. This contrasts with her grandson, George V, who, when asked what his favourite opera was, replied, 'La Boheme —because it's the shortest.'

I was not invited to last week's occasion at Windsor, so I am short of an anecdote. Perhaps I should not have admitted that I was absent. There being some 700 journalists present, few would know that I was not telling the truth if I claimed to have been there. I could have invented my own Duke of Edinburgh encounter.

Me: 'I write all sorts of articles. Serious ones, funny ones.'

The Duke: 'I know that. The serious ones are always good for a laugh.'

And with that he stalked off.