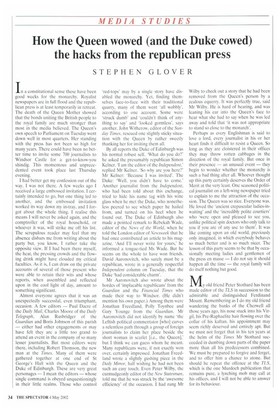 Page 38, 4 May 2002 — How the Queen wowed (and the Duke cowed) the hacks from the republican press
Close

STEPHEN GLOVER In a constitutional sense these have been good weeks for the monarchy. Royalist newspapers are in full flood and the republican press is at least temporarily in retreat. The death of the Queen Mother showed that the bonds uniting the British people to the royal family are much stronger than most in the media believed. The Queen's own speech to Parliament on Tuesday went down well in most quarters. Her standing with the press has not been so high for many years. There could have been no better time to invite some 700 journalists to Windsor Castle for a get-to-know-you shindig. This momentous and unprecedented event took place last Thursday evening.

I had better get my confession out of the way. I was not there. A few weeks ago I received a large embossed invitation, I certainly intended to go, but one thing led to another, and the embossed invitation worked its way down my in-tray, and I forgot about the whole thing. I realise this means I will never be asked again, and the comptroller of the royal household, or whoever it was, will strike me off his list. The scrupulous reader may feel that my absence disbars me from writing about the party but, you know, I rather take the opposite view. If I had been there myself, the heat, the pressing crowds and the flowing drink might have clouded my critical faculties. As it is, I can draw on the private accounts of several of those present who were able to retain their wits and whose reports, when assembled and reflected upon in the cool light of day, amount to something significant.

Almost everyone agrees that it was an unexpectedly successful, even triumphant, occasion. A few editors — Paul Dacre of the Daily Mail, Charles Moore of the Daily Telegraph, Alan Rusbridger of the Guardian and Boris Johnson of this parish — either had other engagements or may have felt they are a little too grand to attend an event in the company of so many lesser journalists. But most editors were there, including Robert Thomson, the new man at the Times. Many of them were gathered together at one end of St George's Hall with the Queen and the Duke of Edinburgh. These are very great personages — I mean the editors — whose single command is obeyed unquestioningly in their little realms, Those who control

'red-tops' may by a single story have disabled the monarchy. Yet, finding themselves face-to-face with their traditional quarry, many of them went 'all wobbly', according to one account. Some were 'struck dumb' and 'couldn't think of anything to say' and 'looked gormless', says another. John Withe row, editor of the Sunday Times, rescued one slightly sticky situation with the Queen by rather sweetly thanking her for inviting them all.

By all reports the Duke of Edinburgh was his normal robust self. 'What do you do?' he asked the presumably republican Simon Kelner. 'I am the editor of the Independent.' replied Mr Kelner. `So why are you here?' Mr Kelner: 'Because I was invited'. The Duke: 'Well, you didn't have to come.' Another journalist from the Independent, who had been told about this exchange, tried to hide his name tag with his wine glass when he met the Duke, who nonetheless peered to see which paper he hailed from, and turned on his heel when he found out. The Duke of Edinburgh also made a pointed remark to Rebekah Wade, editor of the News of the World, when he told the London editor of Newsweek that he had once contributed an article to his magazine. 'And HI never write for yours,' he informed a tongue-tied Ms Wade. But he seems on the whole to have won friends. David Aaronovitch, who surely must be a republican, wrote in a generally respectful Independent column on Tuesday, that the Duke 'had considerable charm'.

Mr Aaronovitch also wrote about the hordes of 'implacable republicans' from the Guardian and the Financial Times who made their way to Windsor. (He didn't mention his own paper.) Among them were Jonathan Freedland, Polly Toynbee and Gary Younge from the Guardian. Mr Aaronovitch did not identify by name 'the Lettish political commentator [who] carves a relentless path through a group of foreign journalists to claim her place beside the short woman in scarlet [i.e., the Queen]; but I think we can guess whom he meant, Many republicans were, if not exactly won over, certainly impressed. Jonathan Freedland wrote a slightly gushing piece in the Daily Mirror, half wishing he had not been such an easy touch. Even Peter Wilby, the curmudgeonly editor of the New Statesman, told me that he was struck by the 'awesome efficiency' of the occasion. I had rung Mr

Wilby to check out a story that he had been removed from the Queen's person by a zealous equerry. It was perfectly true, said Mr Wilby. He is hard of hearing, and was leaning his ear into the Queen's face to hear what she had to say when he was led away and told that It was not appropriate to stand so close to the monarch'.

Perhaps as every Englishman is said to love a lord, every journalist in his or her heart finds it difficult to resist a Queen. So long as they are cloistered in their offices they may throw rotten cabbages in the direction of the royal family. But once in their presence — an unusual event — they begin to wonder whether the monarchy is such a bad thing after all. Whoever thought up this party certainly deserves the Order of Merit at the very least. One seasoned political journalist on a left-wing newspaper tried to explain to me the attraction of the occasion, The Queen was so nice. Everyone was. He loved the 'ancient crepuscular ladies-inwaiting' and the 'incredibly polite courtiers' who 'were open and pleased to see you, unlike political spin doctors who only talk to you if you are of any use to them'. It was like coming upon an old world, previously only imagined, in which everybody behaves so much better and is so much nicer. The lesson of this party seems to be that by occasionally meeting ladies and gentlemen of the press en masse — I do not say it should happen all the time — the royal family will do itself nothing but good.

My old friend Peter Stothard has been made editor of the TLS in succession to the admirable and distinguished Ferdinand Mount. Remembering as I do my old friend wandering the banks of the Cherwell all those years ago, his nose stuck into his Virgil, his Pre-Raphaelite hair flowing over the collar of his kaftan, his appointment may seem richly deserved and entirely apt. But we must not forget that in his ten years at the helm of the Times Mr Stothard succeeded in dumbing down parts of the paper more than all his predecessors combined. We must be prepared to forgive and forget, and to offer him a chance to atone. But should he repeat the offence at the TLS, which is the one Murdoch publication that remains pure, a lynching mob may call at his offices, and I will not be able to answer for its behaviour.