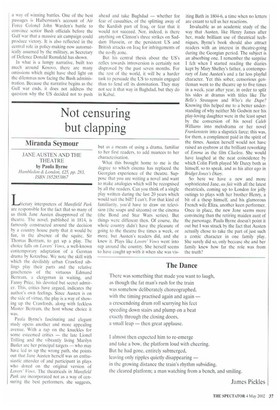 Not censuring but clapping

JANE AUSTEN AND THE THEATRE by Paula Byrne Hambledon & London, £25, pp. 283, ISBN 1852853867 Literary interpreters of Mansfield Park are responsible for the fact that so many of us think Jane Austen disapproved of the theatre. The novel, published in 1814, is famously constructed around the decision by a country house party that it would be fun, in the absence of the squire, Sir Thomas Bertram, to get up a play. The choice falls on Lovers' Vows, a well-known contemporary adaptation of a German drama by Kotzebue. We note the skill with which the devilishly urban Crawford siblings play their parts and the relative gaucheness of the virtuous Edmund Bertram. a clergyman in waiting, and Fanny Price, his devoted but secret admirer. This, critics have argued, indicates the author's own feelings. Since Austen is on the side of virtue, the play is a way of showing up the Crawfords, along with feckless Master Bertram, the host whose choice it was.

Paula Byrne's fascinating and elegant study opens another and more appealing avenue. With a rap on the knuckles for some esteemed critics — the late Lionel Trilling and the vibrantly living Marilyn Butler are her principal targets — who may have led us up the wrong path, she points out that Jane Austen herself was an enthusiastic attender of and participant in plays who doted on the original version of Lovers' Vows. The theatricals in Mansfield Park are incorporated not as a way of censuring the best performers, she suggests, but as a means of using a drama, familiar to her first readers, to add nuances to her characterisation.

What this brought home to me is the degree to which cinema has replaced the Georgian experience of the theatre. Suppose that you are writing a novel and want to make analogies which will be recognised by all the readers. Can you think of a single play written during the last 20 years which would suit the bill? I can't. For that kind of familiarity, you'd have to draw on television (the soaps and sitcoms) or the cinema (the Bond and Star Wars series). But things were different then. Of course, the whole country didn't have the pleasure of going to the theatre five times a week, or more. but Austen's readers did, and she knew it. Plays like Lovers' Vows went into rep around the country. She herself seems to have caught up with it when she was vis iting Bath in 1804-6, a time when no letters are extant to tell us her reactions.

Invaluable as an academic study of the way that Austen, like Henry James after her, made brilliant use of theatrical techniques, Byrne's book should also attract readers with an interest in theatre-going during the Georgian period. The subject is an absorbing one. I remember the surprise I felt when I started reading the diaries kept by Mary Shelley's father, a contemporary of Jane Austen's and a far less playful character. Yet this sober, censorious gentleman went to the theatre up to five times in a week, year after year, in order to split his sides at dramas with titles like The Belle's Stratagem and Who's the Dupe? Knowing this helped me to a better understanding of why neither Mr Godwin nor his play-loving daughter were in the least upset by the conversion of his novel Caleb Williams into melodrama or her novel Frankenstein into a slapstick farce; this was, for them, a compliment paid in the spirit of the times. Austen herself would not have raised an eyebrow at the brilliant reworking of Emma as the film Clueless. She would have laughed at the neat coincidence by which Colin Firth played Mr Darcy both as himself, so to speak, and as his alter ego in Bridget Jones's Diaty.

So here we have a new and more sophisticated Jane, au fait with all the latest theatricals, coming up to London for jolly outings to plays with her brother Henry, a bit of a thesp himself, and his glamorous French wife Eliza, another keen performer. Once in place, the new Jane seems more convincing than the retiring maiden aunt of the parsonage. Paula Byrne doesn't point it out but I was struck by the fact that Austen actually chose to take the part of just such a comic character in one family play. She surely did so, only because she and her family knew how far the role was from the truth?