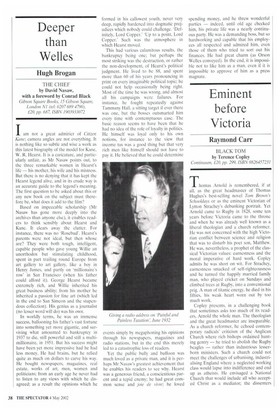 THE CHIEF by David Nasaw, with a foreword by Conrad Black Gibson Square Books, 15 Gibson Square, London N1 (tek 0207 689 4790), £20, pp. 687, ISBN 1903933072 Iam not a great admirier of Citizen Kane; camera angles are not everything. It is nothing like so subtle and wise a work as this latest biography of the model for Kane, W. R. Hearst. It is a caricature, and particularly unfair, as Mr Nasaw points out, to the three remarkable women in Hearst's life — his mother, his wife and his mistress. But there is no denying that it has kept the Hearst legend alive, and in its crude way is an accurate guide to the legend's meaning. The first question to be asked about this or any new book on the subject must therefore be, what does it add to the film?

Based on impeccable scholarship (Mr Nasaw has gone more deeply into the archives than anyone else), it enables readers to think sensibly about Hearst and Kane. It clears away the clutter. For instance, there was no 'Rosebud'. Hearst's parents were not ideal, but then whose are? They were both tough, intelligent, capable people who gave young Willie an unorthodox but stimulating childhood, spent in part trailing round Europe from art gallery to art gallery, like a boy in Henry James, and partly on 'millionaire's row' in San Francisco (when his father could afford it). George Hearst became extremely rich, and Willie inherited his great business ability: from his mother he inherited a passion for fine art (which led in the end to San Simeon and the stupendous collection). His genius as a journalist (no lesser word will do) was his own.

In worldly terms, he was an immense success, ballooning his father's vast fortune into something yet more gigantic, and surviving what amounted to bankruptcy in 1937 to die, still powerful and still a multimillionaire, in 1951. But his success might have been yet more impressive had he had less money. He had brains, but he relied quite as much on dollars to carve his way. He bought newspapers, magazines, real estate, works of art, men, women and politicians; from an early age he never had to listen to any views with which he disagreed; as a result the opinions which he formed in his callowest youth, never very deep, rapidly hardened into dogmatic prejudices which nobody could challenge. 'Definitely, Lord Copper.' Up to a point, Lord Copper.' Such was the atmosphere in which Hearst moved.

This had various calamitous results, the bankruptcy being one; but perhaps the most striking was the destruction, or rather the non-development, of Hearst's political judgment. He lived to be 88, and spent more than 60 of his years pronouncing in print on every imaginable political topic; he could not help occasionally being right. Most of the time he was wrong, and almost all his campaigns were failures. For instance, he fought repeatedly against Tammany Hall, a sitting target if ever there was one, but the bosses outsmarted him every time with contemptuous ease. The basic reason seems to have been that he had no idea of the role of loyalty in politics. He himself was loyal only to his own notions, for instance to the view that income tax was a good thing but that very rich men like himself should not have to pay it. He believed that he could determine events simply by megaphoning his opinions through his newspapers, magazines and radio stations, but in the end this merely led to a catastrophic loss of readers.

Yet the public bully and buffoon was much loved as a private man, and it is perhaps Mr Nasaw's greatest achievement that he enables his readers to see why. Hearst was a generous friend, a conscientious parent and a tepid enemy; he had great common sense and joie de vivre; he loved spending money, and he threw wonderful parties — indeed, until old age checked him, his private life was a nearly continuous party. He was a demanding boss, but so hardworking and capable that his employees all respected and admired him, even those of them who tried to sort out his finances. He had great charm (as Orson Welles conveyed). In the end, it is impossible not to like him as a man, even if it is impossible to approve of him as a press magnate.