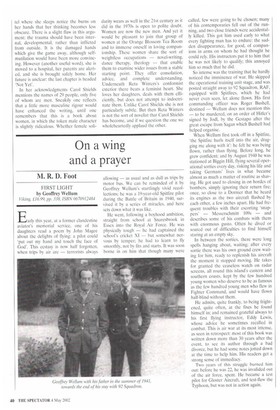 On a wing and a prayer

Early this year, at a former clandestine aviator's memorial service, one of his daughters read a poem by John Magee about the delights of flying: a pilot could 'put out my hand and touch the face of God'. This ecstasy is now half forgotten, when trips by air are — terrorists always

allowing — as usual and as dull as trips by motor bus. We can be reminded of it by Geoffrey Wellum's startlingly vivid recollections; he was a 19-year-old Spitfire pilot during the Battle of Britain in 1940, survived it by a series of miracles, and here sets down what it was like.

He went, following a boyhood ambition, straight from school at Snaresbrook in Essex into the Royal Air Force. He was physically tough — he had captained the school's cricket XI — but somewhat nervous by temper; he had to learn to fly smoothly, not by fits and starts. It was soon borne in on him that though many were called, few were going to be chosen; many of his contemporaries fell out of the running, and two close friends were accidentally killed. This got him used early to what every fighting man has to endure: the sudden disappearance, for good, of companions in arms on whom he had thought he could rely. His instructors put it to him that he was not likely to qualify; this annoyed him so much that he did.

So intense was the training that he hardly noticed the imminence of war. He skipped the operational training unit stage, and was posted straight away to 92 Squadron, RAF, equipped with Spitfires, which he had never even seen, let alone flown. His first commanding officer was Roger Bushell, destined — Wellum does not mention this — to be murdered, on an order of Hitler's signed by Jodl, by the Gestapo after the great escape from Sagan which Bushell had helped organise.

When Wellum first took off in a Spitfire, 'the Spitfire hurls itself into the air, dragging me along with it': he felt he was being flown, rather than flying. Before long, he grew confident: and by August 1940 he was stationed at Biggin Hill, flying several operational sorties every day, risking his life and taking Germans' lives in what became almost as much a matter of routine as shaving. He got used to closing in on hordes of bombers, simply ignoring their return fire; once, so close to a Dornier that he heard its engines as the two aircraft flashed by each other, a few inches apart. He had frequent troubles with their escorting 'snappers' — Messerschmitt 109s — and describes some of his combats with them with enormous gusto. Often he dived or soared out of difficulties to find himself staring at an empty sky.

In between the sorties, there were long spells hanging about, waiting; after every sortie there was his own ground crew waiting for him, ready to replenish his aircraft the moment it stopped moving. He takes for granted the ceaseless watch on radar screens, all round this island's eastern and southern coasts, kept by the few hundred young women who deserve to be as famous as the few hundred young men who flew in Fighter Command, and would have flown half-blind without them.

He admits, quite frankly, to being frightened, quite often, at the fixes he found himself in; and remained grateful always to his first flying instructor, Eddy Lewis, whose advice he sometimes recalled in combat. This is air war at its most intense, as seen in retrospect: most of this book was written down more than 30 years after the event, to see its author through a bad divorce, but he had some notes jotted down at the time to help him. His readers get a strong sense of immediacy.

Two years of this struggle burned him out: before he was 22, he was invalided out of the air force, spent. He became a test pilot for Gloster Aircraft, and test-flew the Typhoon, but was not in action again.