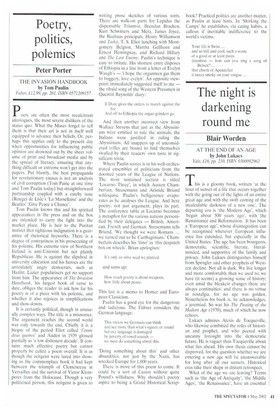 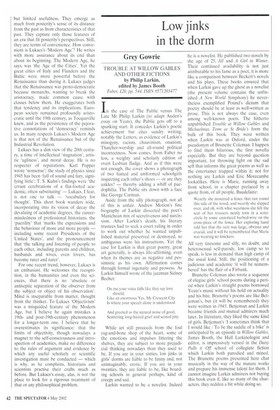 The night is darkening round me

AT THE END OF AN AGE by John Lukacs

This is a gloomy book, written 'at the hour of sunset of a life that occurs together with the going out of the lights of an entire great age and with the swift coming of the incalculable darkness of a new one'. The departing era is 'the Modern Age', which 'began about 500 years ago', with the Renaissance and Reformation. It has been a 'European age', whose disintegration can be recognised wherever European influence has extended, but especially in the United States. The age has been bourgeois, democratic, scientific, literate, literalminded, and supportive of the family and privacy. John Lukacs distinguishes himself from Spengler and other prophets of Western decline. Not all is dark. We live longer and more comfortably than we used to; we have (it seems) a growing sense of history; even amid the bleakest changes there are always continuities; and there is no virtue in nostalgia, for no age was golden. Nonetheless his book is, he acknowledges, a jeremiad. So was his The Passing of the Modern Age (1970), much of which he now echoes.

Lukacs admires Alexis de Tocqueville, who likewise combined the roles of historian and prophet, and who peered with uncanny foresight into the democratic future. He is vaguer than Tocqueville about what lies ahead. His own thesis cannot be disproved, for the question whether we are entering a new age will be unanswerable for long after all our sunsets. Historical eras take their shape in distant retrospect.

What of the age we are leaving? Terms such as 'the Age of Antiquity', 'the Middle Ages', 'the Renaissance', have an essential but limited usefulness. They emerge as much from posterity's sense of its distance from the past as from characteristics of that past. They capture only those features of an era that fit posterity's perspectives. Still, they are terms of convenience. How convenient is Lukacs's 'Modern Age'? He writes with more assurance about its end than about its beginning. The Modern Age, he says, was 'the Age of the Cities'. Yet the great cities of Italy and Flanders and the Baltic were more powerful before the Renaissance than during it. Lukacs judges that the Renaissance was proto-democratic because monarchs, wanting to break the aristocracy, made common cause with classes below them. He exaggerates both that tendency and its implications. European society remained profoundly aristocratic until the 19th century, as Tocqueville knew, and as the persistence of the pejorative connotations of 'democracy' reminds us. In many respects Lukacs's Modern Age is that not of the Renaissance but of the Industrial Revolution.

Lukacs has a dim view of the 20th century, a time of intellectual 'stagnation', artistic 'ugliness', and moral decay. He is no respecter of reputations. Karl Popper wrote 'nonsense', the study of physics since 1945 has been 'full of sound and fury, signifying little.; T. S. Kuhn's findings were 'the errant cerebrations of a flat-footed academic, often substituting' — Lukacs, I fear,

is not one to talk 'vocabulary for thought'. This short book wanders wide, incorporating into its vision of decay the devaluing of academic degrees, the careermindedness of professional historians, the 'puerility' that 'marks the expressions and the behaviour of more and more people — including some recent Presidents of the United States', and the pronouncement that 'the talking and listening of people to each other, including parents and children, husbands and wives, even lovers, has become rarer and rarer'.

For one recent trend, however, Lukacs is an enthusiast. He welcomes the recognition, in the humanities and even the sciences, that there is no 'absolute or antiseptic separation of the observer from the subject or object of his observation'. Mind is inseparable from matter, thought from the thinker. To Lukacs 'Objectivism' was a misguided feature of the Modern Age, but I believe he again mistakes a 19thand post-19th-century phenomenon for a longer-term one. I believe that he overestimates its significance: that the limits of objectivity, though nowadays a magnet to the self-consciousness and introspection of academics, make no difference to the rules of argument and evidence by which any useful scholarly or scientific investigation must be conducted — which is why, as he complains, historians and scientists practise their crafts much as before. But Lukacs's essay, alas, is not the place to look for a rigorous treatment of that or any philosophical problem.