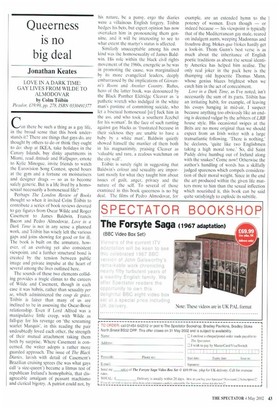 Queerness is no big deal

LOVE IN A DARK TIME: GAY LIVES FROM WILDE TO ALMODO VAR by Colm Teibin Picador, £19.99, pp. 278, ISBN 0330491377 Can there be such a thing as a gay life, in the broad sense that this book understands it? There are things that gays do, are thought by others to do or think they ought to do: shop at IKEA, take holidays in the Canary Islands, buy dinky apartments in Miami, read Attitude and Wallpaper, emote to Kylie Minogue, invite friends to watch the Eurovision Song Contest, spend hours at the gym and a fortune on moisturisers and designer drugs — so as to become safely generic. But is a life lived by a homosexual necessarily a homosexual life?

Perhaps The London Review of Books thought so when it invited Colm Thibin to contribute a series of book reviews devoted to gay figures from Oscar Wilde and Roger Casement to James Baldwin, Francis Bacon and Pedro Almodovar. Love in a Dark Time is not in any sense a planned work. and Toibin has wisely left the various gaps and joins showing for good or for ill. The book is built on the armature, however, of an evolving yet also consistent viewpoint, and a further structural bond is created by the tension between public image and private impulse at the heart of several among the lives outlined here.

The sounds of these two elements colliding provides a tragic climax to the careers of Wilde and Casement, though in each case it was hubris, rather than sexuality per se, which administered the coup de grace. Thibin is fairer than many of us are inclined to be in assessing the Oscar-Bosie relationship. Even if Lord Alfred was a manipulative little creep. with Wilde as fall-guy for his revenge on 'the screaming scarlet Marquis', in this reading the pair undoubtedly loved each other, the strength of their mutual attachment taking them both by surprise. Where Casement is concerned, the writer adopts a rather more guarded approach. The issue of The Black Diaries, lavish with detail of Casement's Brazilian cruising sprees (he was what gays call 'a size-queen') became a litmus test of republican Ireland's homophobia, that disagreeable amalgam of peasant machismo and clerical bigotry. A patriot could not, by his nature, be a pansy, ergo the diaries were a villainous English forgery. Toibin hedges his bets, but expert opinion has now overtaken him in pronouncing them genuine, and it will be interesting to see to what extent the martyr's status is affected.

Similarly unacceptable among his own kind was the homosexuality of James Baldwin. His role within the black civil rights movement of the 1960s, energetic as he was in promoting the cause, was marginalised by its more evangelical leaders, deeply embarrassed by the implications of Giovanni's Room and Another Country. Rufus, hero of the latter book, was denounced by the Black Panther Eldridge Cleaver as 'a pathetic wretch who indulged in the white man's pastime of committing suicide, who let a bisexual homosexual [sic] fuck him in the ass. and who took a southern Jezebel for his woman'. In the face of such ranting against gay blacks as 'frustrated because in their sickness they are unable to have a baby by a white man'. Baldwin quietly showed himself the manlier of them both in his magnanimity, praising Cleaver as 'valuable and rare, a zealous watchman on the city wall'.

Toibin is surely right in suggesting that Baldwin's colour and sexuality are important mostly for what they taught him about issues of guilt. anger, privacy and the nature of the self. To several of those examined in this book queerness is no big deal. The films of Pedro Almodovar, for example, are an extended hymn to the potency of women. Even though — or indeed because — his viewpoint is typically that of the Mediterranean gay male, reared on indulgent aunts, weeping Madonnas and froufrou drag, blokes qua blokes hardly get a look-in. Thom Gunn's best verse is as much about the inheritance of English poetic traditions as about the sexual identity America has helped him realise. The only real joker in the pack here is the thumping old hypocrite Thomas Mann, whose genius blazes brightest when we catch him in the act of concealment.

Love in a Dark Time, as I've noted, isn't necessarily the sum of its parts. Toibin has an irritating habit, for example, of leaving his essays hanging in mid-air, I suspect because anything too obviously like an ending is deemed vulgar by the arbiters of LRB house style. His occasional swipes at the Brits are no more original than we should expect from an Irish writer with a large transatlantic following. 'There is nothing,' he declares, 'quite like two Englishmen taking a high moral tone.' So, did Saint Paddy drive humbug out of Ireland along with the snakes? Come now Otherwise the author's handling of words has a skilfully judged spareness which compels consideration of their moral weight. Since in the end the art produced within the given life matters more to him than the sexual inflection which nourished it, this book can be said quite satisfyingly to explode its subtitle.