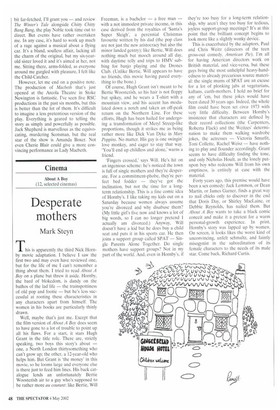 About A Boy (12, selected cinemas)

This is apparently the third Nick Hornby movie adaptation. I believe I saw the first two and may even have reviewed one, but for the life of me I can't remember a thing about them. I tried to read About A Boy on a plane but threw it aside. Hornby, the bard of blokedom, is dandy on the bathos of the lad life — the trainspottiness of old pop and footie — but he's less successful at rooting these characteristics in any characters apart from himself. The women in his books are particularly thinly drawn.

Well, maybe that's just me. Except that the film version of About A Boy does seem to have gone to a lot of trouble to point up all his flaws. For a start, it stars Hugh Grant in the title role. There are, strictly speaking, two boys this story's about — one, a North London thirtysomething who can't grow up; the other, a 12-year-old who helps him. But Grant is 'the money' in this movie, so he looms large and everyone else is there just to feed him lines. His back catalogue lends an unfortunately Bertie Woosterish air to a guy who's supposed to be rather more au courant: like Bertie, Will Freeman, is a bachelor — a free man — with a not immodest private income, in this case derived from the royalties of Santa's Super Sleigh', a perennial Christmas favourite written by his dad (the pop class are not just the new aristocracy but also the minor landed gentry): like Bertie, Will does nothing much but mooch around all day, with daytime telly and trips to HMV subbing for banjo playing and the Drones Club. (Unlike Bertie, Will appears to have no friends, this movie having pared everything to the bone.) Of course, Hugh Grant isn't meant to be Bertie Woosterish. so his hair is not floppy but spikey, and he wears a T-shirt with a mountain view, and his accent has modulated down a notch and taken an off-peak return on the Northern Line. For these efforts, Hugh has been hailed for undergoing a transformation of Meryl Streep-like proportions, though it strikes me as being rather more like Dick Van Dyke in Mary Poppins. No matter. His guy is one swingin' love monkey, and eager to stay that way. 'You'll end up childless and alone,' warns a friend.

'Fingers crossed,' says Will. He's hit on an ingenious scheme: he's noticed the town is full of single mothers and they're desperate. For a commitment-phobe, they're perfect bed fodder — they've got the inclination, but not the time for a longterm relationship. This is a fine comic idea of Hornby's. I like taking my kids out on a Saturday because women always assume you're divorced and why disabuse them? (My little girl's five now and knows a lot of big words, so I can no longer pretend I actually am divorced.) Anyway, Will doesn't have a kid but he does buy a child seat and puts it in his sports car. He then joins a support group called SPAT — Single Parents Alone Together. Do single mothers have support groups? Not in my part of the world. And, even in Hornby's, if they're too busy for a long-term relationship, why aren't they too busy for tedious, joyless support-group meetings? It's at this point that the brilliant concept begins to look more like a slightly wonky device.

This is exacerbated by the adaptors, Paul and Chris Weitz (directors of the teen gross-out comedy, American Pie). I'm all for having American directors work on British material, and vice-versa, but these guys bring the most unhelpful heavy-handedness to already precarious source material: the single mums of SPAT are an excuse for a lot of plonking jabs at vegetarians, kaftans. earth-mothers. I hold no brief for any of 'em, but these jokes would have been dated 30 years ago. Indeed, the whole film could have been set circa 1973 with very little difficulty. Between Hornby's insistence that characters are defined by their record collections (the Carpenters, Roberta Flack) and the Weitzes' determination to make them walking wardrobe jokes, the actresses — Victoria Smurfit, Toni Collette, Rachel Weisz — have nothing to play and flounder accordingly. Grant seems to have difficulty finding the tone, and only Nicholas Hoult, as the lonely putupon boy who redeems Will from his own emptiness, is entirely at ease with the material.

Forty years ago, this premise would have been a sex comedy: Jack Lemmon, or Dean Martin, or James Garner, finds a great way to nail chicks only to discover in the end that Doris Day, or Shirley MacLaine, or Debbie Reynolds, has nailed them. But About A Boy wants to take a black comic conceit and make it a pretext for a warm personal-growth experience. In print. Hornby's story was lapped up by women. On screen, it looks likes the worst kind of unconvincing, unfelt schmaltz, and faintly misogynist in the subordination of its female characters to the needs of its male star. Come back, Richard Curtis.