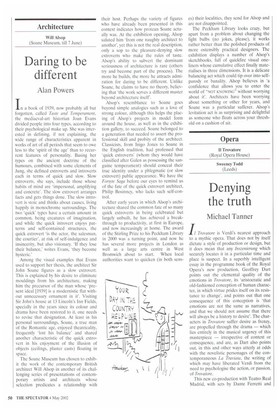 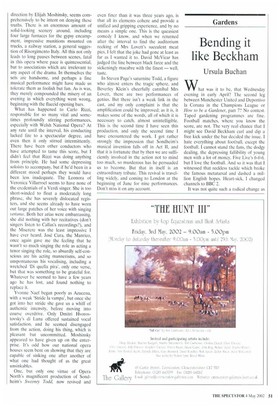 I1 Trovatore is Verdi's nearest approach to a mythic opera. That does not by itself dictate a style of production or design, but it does mean that any inszenierung which securely locates it in a particular time and place is suspect. In a superbly intelligent essay in the programme book of the Royal Opera's new production, Geoffrey Dart points out the elemental quality of the emotions in Trovatore, its 'aristocratic and old-fashioned conception of human character, in which virtue prides itself on its resistance to change', and points out that one consequence of this conception is 'that emotions are not the same as narratives, and that we should not assume that there will always be a history to desire'. The characters in Trovatore suffer desire as frenzy,

are propelled through the drama which lies entirely in the musical urgency of this masterpiece — irrespective of context or consequence, and are, as Dart also points out, in this and other ways utterly at odds with the novelistic personages of the contemporaneous La Traviata, the writing of which may have liberated Verdi from the need to psychologise the action, or passion, of Trovatore.

This new co-production with Teatro Real Madrid, with sets by Dante Ferretti and direction by Elijah Moshinsky, seems comprehensively to be intent on denying these truths. There is an enormous amount of solid-looking scenery around, including four large furnaces for the gypsy encampment, impressive munitions mounted on trucks, a railway station, a general suggestion of Risorgimento Italy. All this not only leads to long pauses between scenes, fatal in this opera where pace is quintessential, but to associations which are irrelevant to any aspect of the drama. In themselves the sets are handsome, and perhaps a fine musical performance might have made us tolerate them as foolish but fun. As is was, they merely compounded the misery of an evening in which everything went wrong, beginning with the flaccid opening bars.

What has happened to Carlo Rizzi, responsible for so many vital and sometimes profoundly stirring performances, especially with Welsh National Opera? At any rate until the interval, his conducting lacked fire to a spectacular degree, and even then it only stirred intermittently. There have been other conductors who have attempted to tame this score, but I didn't feel that Rizzi was doing anything from principle. He had some depressing soloists to accompany, but if he'd been in a different mood perhaps they would have been less inadequate. The Leonora of Veronica Villarroel seems to have none of the credentials of a Verdi singer. She is too short-winded to float a moderately long phrase, she has severely dislocated registers, and she seems already to have worn out large patches of her voice with singing verismo. Both her arias were embarrassing, she did nothing with her recitatives (don't singers listen to Callas's recordings?), and the Miserere was the least impressive I have ever heard. Jose Cura, the Manrico, once again gave me the feeling that he wasn't so much singing the role as acting a tenor singing the role, so absurdly self-conscious are his acting mannerisms, and so unspontaneous his vocalising, including a wretched 'Di quella pira', only one verse, but that was something to be grateful for. Whatever he seemed to have a few years ago he has lost, and found nothing to replace it.

Yvonne Naef began poorly as Azucena, with a weak 'Stride la vampa', but once she got into her stride she gave us a whiff of authentic intensity, before moving into coarse overdrive. Only Dmitri Hvorostovsky's di Luna offered sustained vocal satisfaction, and he seemed disengaged from the action, doing his thing, which is pleasant but uncommitted. Moshinsky appeared to have given up on the enterprise. It's odd how our national opera houses seem bent on showing that they are capable of sinking one after another of what one had thought of as the great unsinkables.

One, but only one virtue of Opera North's magnificent production of Sondheim's Sweeney Todd, now revived and

even finer than it was three years ago, is that all its elements cohere and provide a unified and gripping experience, and by no means a simple one. This is the queasiest comedy I know, and when we returned after the interval to find the auditorium reeking of Mrs Lovett's succulent meat pies, I felt that the joke had gone at least as far as I wanted it to. David McVicar has judged the line between black farce and the sickeningly macabre with the finest — well, taste.

In Steven Page's saturnine Todd, a figure who almost enters the tragic sphere, and Beverley Klein's cheerfully cannibal Mrs Lovett, there are two performances of genius. But there isn't a weak link in the cast, and my only complaint is that the amplification could be improved; as it is, it makes some of the words, all of which it is necessary to catch, almost unintelligible. This is the second time I have seen this production, and only the second time I have encountered the work. I got rather strongly the impression that Sondheim's musical invention falls off in Act II, and that it is fortunate that by then we are sufficiently involved in the action not to mind too much, so murderous has he persuaded us to become. But that in itself is an extraordinary tribute. This revival is travelling widely, and coming to London at the beginning of June for nine performances. Don't miss it on any account.