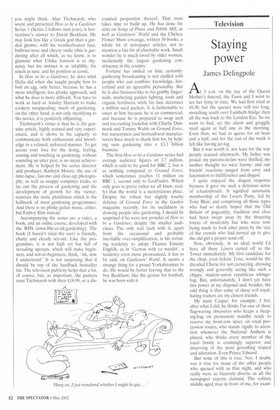 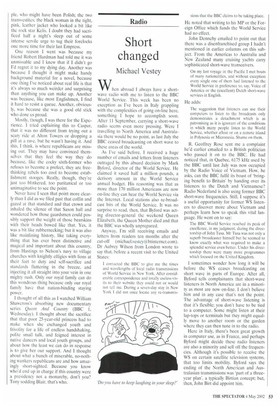 At 3 a.m. on the day of the Queen Mother's funeral, the Fawn and I went to see her lying in state. We had first tried at 10.30, but the queues were still too long, stretching south over Lambeth bridge then all the way back to the London Eye. So we went to bed, set the alarm and groggily tried again at half one in the morning. Even then, we had to queue for an hour and a half, and for the rest of the week it felt like having jet-lag.

But it was worth it, not least for the way people reacted afterwards. My father was proud; my parents-in-law were thrilled; my mother thought we were barmy; and our friends' reactions ranged from envy and fascination to indifference and disgust.

I quite enjoyed the disgust response because it gave me such a delicious sense of schadenfreude. It signified automatic membership of the Losers Party, led by Tony Blair, and comprising all those types who had so dearly hoped that the Old Britain of pageantry, tradition and class had been swept away by the thrusting forces of modernity but who were now being made to look utter prats by the size of the crowds who had turned up to give the old girl a proper send-off.

Now, obviously, in an ideal world I'd have all these Losers carted off to the Tower immediately. My first candidate for the chop, even before Tone, would be the dreaded Cherie for not curtseying, dressing wrongly and generally acting like such a chippy, student-union republican whingebag. But, unfortunately, I don't yet have this power at my disposal and, besides, the odd thing is that some of these evil royalhating traitors are my closest friends.

My mate Caspar, for example. I bet, after what I did, he thinks I'm one of those flag-waving obsessives who keeps a sleeping-bag on permanent standby ready to reserve my front-row space on royal procession routes, who stands rigidly to attention whenever the National Anthem is played, who thinks every member of the royal family is crushingly superior and deserving of the most grovelling respect and adoration. Even Prince Edward.

But none of this is true. Nor, I doubt, was it true for many of the other people who queued with us that night, and who really were as bizarrely diverse as all the newspaper reports claimed. The solitary middle-aged man in front of me, for exam pie, who might have been Polish; the two transvestites; the black woman in the tight, pink, leather jacket who looked a bit like the rock star Kelis. I doubt they had sacrificed half a night's sleep out of some intense servile urge to tug their forelocks one more time for their last Empress.

One reason I went was because my friend Robert Hardman had told me it was unmissable and I knew that if I didn't go I'd regret it to my dying day. Another was because I thought it might make handy background material for a novel, because one thing I've noticed about real life is that it's always so much weirder and surprising than anything you can make up. Another was because, like most Englishmen, I find it hard to resist a queue. Another, obviously, was because she was a good old stick who done us proud.

Mostly, though, I was there for the Experience. I tried explaining this to Caspar, that it was no different from trying out a scary ride at Alton Towers or dropping a pill at a rave, but he wasn't having it. And this, I think, is where republicans are missing out. They may have convinced themselves that they feel the way they do because, like the cocky sixth-former who refuses to become a prefect, they are freethinking rebels too cool to become establishment stooges. Really, though, they're just too blinkered. too puritanical or too unimaginative to see the point.

Never have I seen that point more clearly than I did as we filed past that coffin and gazed at that standard and that crown and inhaled the silence of that Saxon hall and wondered how those guardsmen could possibly support the weight of those bearskins with their heads bowed like that. Yes, it was a bit like rubbernecking; but it was also like mainlining history, like taking everything that has ever been distinctive and magical and important about this country, from Hastings to Nelson's navy to village churches with knightly effigies with lions at their feet to duty and self-sacrifice and standards fluttering in the breeze, and injecting it all straight into your vein in one mighty rush. Only our royal family can do this wondrous thing because only our royal family have that nation-binding staying power.

I thought of all this as I watched William Shawcross's absorbing new documentary series Queen And Country (BBC 1, Wednesday). I thought about the sacrifice that that poor 25-year-old princess had to make when she exchanged youth and frivolity for a life of endless handshaking, polite small talk, and feigned interest in native dancers and local youth groups, and about how the least we can do in response is to give her our support. And I thought about what a bunch of miserable, no-nothing vvankers republicans are and how amazingly short-sighted. Because you know who'd end up in charge if this country were a presidency not a monarchy, don't you? Tony sodding Blair, that's who.