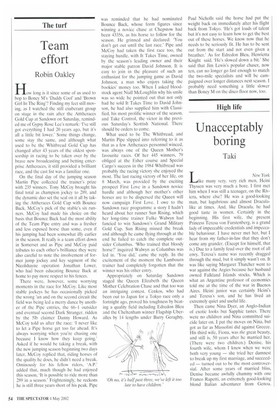 How long is it since some of us used to bop to Boney M's 'Daddy Cool' and 'Brown Girl In The Ring'? Finding my feet still moving, as I watched the still exuberant group on stage in the rain after the Atttheraces Gold Cup at Sandown on Saturday, reminded me of Gypsy Rose Lee's remark: 'I've still got everything I had 20 years ago, but it's all a little bit lower.' Some things change, some stay the same, and although what used to be the Whitbread Gold Cup has changed after 43 years of the oldest sponsorship in racing to be taken over by the brave new broadcasting and betting enterprise Attheraces, it still provided a brilliant race, and the cast list was a familiar one.

On the final day of the jumping season Martin Pipe collected the trainer's prize with 235 winners. Tony McCoy brought his final total as champion jockey to 289, and the dynamic duo set the seal on it all by taking the Attheraces Gold Cup with Bounce Back, McCoy's pick of the stable's six runners. McCoy had made his choice on the basis that Bounce Back had the most ability of the Team Pipe entry and was a fresher and less exposed horse than some, even if his jumping had been somewhat iffy earlier in the season. It really is a team effort down in Somerset and as Pipe and McCoy paid tributes to each other's brilliance they were also careful to note the involvement of former jump jockey and key segment of the Nicolshayne operation Jonathan Lower, who had been educating Bounce Back at home to pay more respect to his fences.

There were, however, some worrying moments in the race for McCoy. Like most stable jockeys he has occasionally picked the wrong 'un and on the second circuit the field was being led a merry dance by another of the Pipe entries, the 66-1 outsider and eventual second Dark Stranger, ridden by the 5Ib claimer Danny Howard. As McCoy told us after the race: 'I never like to let a Pipe horse get too far ahead. It's always worrying when you're chasing one because I know how they keep going.' Asked if he would be taking a break, with the new jumping season beginning two days later. McCoy replied that, riding horses of the quality he does, he didn't need a break. Ominously for his fellow riders, 'A.P.' added that, much though he had enjoyed this season, 'It is possible to ride more than 289 in a season.' Frighteningly, he reckons he is still three years short of his peak. Pipe was reminded that he had nominated Bounce Back, whose form figures since winning a novice chase at Chepstow had been 43356, as his horse to follow for the season. He grinned and declared: 'You don't get out until the last race.' Pipe and McCoy had taken the first race too, the staying hurdle, with It Takes Time, owned by the season's leading owner and their major stable patron David Johnson. It is easy to join in the pleasure of such an enthusiast for the jumping game as David Johnson, a man who enjoys taking the bookies' money too. When I asked bloodstock agent Niall McLoughlin why his smile was so wide he pointed out that not only had he sold It Takes Time to David Johnson, he had also supplied him with Classified, his most prolific winner of the season, and Take Control, the victor in the previous Saturday's Scottish National. There should be orders to come.

What used to be The Whitbread, and Martin Pipe slipped into referring to it as that as a few Attheraces personnel winced, was always one of the Queen Mother's favourite races. Of her 445 winners, 79 obliged at the Esher course and Special Cargo's success in the 1984 Whitbread was probably the racing victory she enjoyed the most. The last racing victory of her life, on 8 March, was provided by the exciting prospect First Love in a Sandown novice hurdle and although her mother's other horses are to be dispersed the Queen will now campaign First Love. I owe to the Sandown race programme a story I hadn't heard about her runner Sun Rising, which her long-time trainer Fulke Walwyn had fancied to win Sandown's Grand Military Gold Cup. Sun Rising missed the break and although he came flying through at the end he failed to catch the complete outsider Columbus. 'Who trained that bloody horse?' inquired Walwyn as Columbus was led in. 'You did, came the reply. In the excitement of the moment the Lambourn trainer had completely forgotten that the winner was his other entry.

Appropriately on Saturday Sandown staged the Queen Elizabeth the Queen Mother Celebration Chase and that too was an intriguing contest. Cenkos, who had been out to Japan for a Tokyo race only a fortnight ago, proved his toughness by beating a quality field including Edredon Bleu and the Cheltenham winner Flagship Uberalles by 14 lengths under Barry Geraghty. Paul Nicholls said the horse had put the weight back on immediately after his flight back from Tokyo. 'He's got loads of talent but it's not easy to learn how to get the best out of these horses. We know now that he needs to be seriously fit. He has to be sent out from the start and not even given a breather.' As for Edredon Bleu, Henrietta Knight said, 'He's slowed down a bit.' She said that Jim Lewis's popular chaser, now ten, can no longer go fast enough to match the two-mile specialists and will be campaigned over longer distances next season. I probably need something a little slower than Boney M on the disco floor now, too.