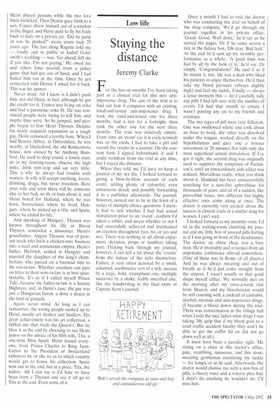 For the last six months I've been taking part in a clinical trial for this new antiimpotence drug. The aim of the trial is to find out how it compares with an existing, tried-and-tested anti-impotence drug. I took the tried-and-tested one for three months, had a rest for a fortnight, then took the other one for the next three months. The trial was relatively simple. Every time an 'event' (as it is coyly termed) was on the cards, I had to take a pill and record the results in a journal. On the consent form I signed beforehand, it said I could withdraw from the trial at any time, hut! stayed the distance.

When they told me I'd have to keep a journal of my sex life, I looked forward to giving a blow-by-blow account of each event, adding plenty of colourful, even extraneous detail, and possibly forwarding it to a publisher afterwards. The journal, however, turned out to be in the form of a series of multiple-choice questions. I merely had to tick whether I had had sexual stimulation prior to an 'event'. confirm I'd taken a tablet, and assess whether or not I had successfully achieved and maintained an erection throughout (yes, no, or yes and no). There was nothing at all about enjoyment, duration, props or numbers taking part. Flicking back through my journal, however. I can tell a lot about the 'events' from the nature of the ticks themselves. Failure is very often denoted by a small, ashamed, unobtrusive sort of a tick: success by a large, bold, triumphant one; multiple successes by a shaky, feebly inscribed one, like the handwriting in the final entry of Captain Scott's journal.

Once a month I had to visit the doctor who was conducting the trial on behalf of the drug company. We'd go through my journal together in his private office. 'Good. Good. Well done,' he'd say as he turned the pages. Or if he came across a tick in the failure box, 'Oh dear. Bad luck.' At the end he'd sum up my monthly performance as a whole. 'A good time was had by all by the look of it.' he'd say. Or simply, 'Congratulations!' He said it as if he meant it. too. He was a man who liked his patients to enjoy themselves. He'd then take my blood pressure (always slightly high) and feel my tackle. Finally — always a tense moment this — he'd carefully tally any pills I had left over with the number of events I'd had that month to ensure I wasn't passing any on to my friends and relations.

The two types of pill were very different. One was swallowed whole and took about an hour to work, the other was dissolved under the tongue, worked directly on the hypothalamus and gave one a trouser movement in 20 minutes flat with only the most superficial sexual stimulation. If I've got it right, the second drug was originally used to suppress the symptoms of Parkinson's, until an extraordinary side-effect was noticed. Marvellous really, when you think about it. Mankind has been unsuccessfully searching for a sure-fire aphrodisiac for thousands of years, and all of a sudden, like proverbial buses, two different but highly effective ones come along at once. The doctor is currently very excited about the success in clinical trials of a similar drug for women. I can't wait.

I looked forward to my monthly visits. I'd sit in the waiting-room clutching my journal and my little box of unused pills feeling as if I was going in front of the headmaster. The doctor, an obese chap, was a busy man. He'd invariably just returned from an impotence conference abroad somewhere. (One of these was in Rome of all places.) And he was always sweating and out of breath as if he'd just come straight from the airport. I wasn't usually in that good shape myself either. We normally met on the morning after my once-a-week visit from Sharon, and my bloodstream would be still coursing with a cocktail of cannabis, alcohol, nicotine and anti-impotence drugs. (I became a blood donor during the trial. There was consternation in the village hall when I told the nice ladies what drugs I was taking. My quip that if my blood goes to a road traffic accident fatality they won't be able to get the coffin lid on did not go down well at all.) It must have been a peculiar sight. Me sitting on a chair in this doctor's office, pale, trembling, nauseous, and this stout, sweating gentleman examining my tackle — for lumps, or so he said. Afterwards, the doctor would dismiss me with a new box of pills, a cheery wave and a sincere plea that I didn't do anything he wouldn't do. I'll miss him.