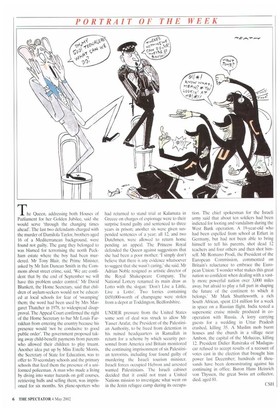 The Queen, addressing both Houses of Parliament for her Golden Jubilee, said she would serve 'through the changing times ahead'. The last two defendants charged with the murder of Damilola Taylor, brothers aged 16 of a Mediterranean background, were found not guilty. The gang they belonged to was blamed for terrorising the north Peckham estate where the boy had been murdered. Mr Tony Blair, the Prime Minister, asked by Mr lain Duncan Smith in the Commons about street crime, said, We are confident that by the end of September we will have this problem under control.' Mr David Blunkett, the Home Secretary, said that children of asylum-seekers would not be educated at local schools for fear of 'swamping' them; the word had been used by Mrs Margaret Thatcher in 1978, to widespread disapproval. The Appeal Court confirmed the right of the Home Secretary to bar Mr Louis Farrakhan from entering the country because his presence would not be conducive to good public order'. The government proposed taking away child-benefit payments from parents who allowed their children to play truant. Another idea put up by Miss Estelle Morris. the Secretary of State for Education, was to offer to 70 secondary schools and the primary schools that feed them the presence of a uniforrned policeman. A man who made a living by diving into water hazards on golf courses, retrieving balls and selling them, was imprisoned for six months, Six plane-spotters who had returned to stand trial at Kalamata in Greece on charges of espionage were to their surprise found guilty and sentenced to three years in prison; another six were given suspended sentences of a year; all 12, and two Dutchmen. were allowed to return home pending an appeal. The Princess Royal defended the Queen against suggestions that she had been a poor mother: 'I simply don't believe that there is any evidence whatsoever to suggest that she wasn't caring,' she said. Mr Adrian Noble resigned as artistic director of the Royal Shakespeare Company. The National Lottery renamed its main draw as Lotto with the slogan: 'Don't Live a Little, Live a Lotto'. Two lorries containing f:650,000-worth of champagne were stolen from a depot at Toddington, Bedfordshire.

UNDER pressure from the United States some sort of deal was struck to allow Mr Yasser Arafat, the President of the Palestinian Authority, to be freed from detention in his ruined headquarters in Ramallah in return for a scheme by which security personnel from America and Britain monitored the continuing imprisonment of six Palestinian terrorists, including four found guilty of murdering the Israeli tourism minister. Israeli forces occupied Hebron and arrested wanted Palestinians. The Israeli cabinet decided that it could not trust a United Nations mission to investigate what went on in the Jenin refugee camp during its occupa

tion. The chief spokesman for the Israeli army said that about ten soldiers had been indicted for looting and vandalism during the West Bank operation. A 19-year-old who had been expelled from school at Erfurt in Germany, but had not been able to bring himself to tell his parents, shot dead 12 teachers and four others and then shot himself. Mr Romano Prodi, the President of the European Commission, commented on Britain's reluctance to embrace the European Union: 'I wonder what makes this great nation so confident when dealing with a vastly more powerful nation over 3,000 miles away, but afraid to play a full part in shaping the future of the continent to which it belongs.' Mr Mark Shuttleworth, a rich South African, spent /14 million for a week in space on a Russian flight. India tested a supersonic cruise missile produced in cooperation with Russia. A lorry carrying guests for a wedding in Uttar Pradesh crashed, killing 35. A Muslim mob burnt houses and the church in a village near Ambon, the capital of the Moluccas, killing 12. President Didier Ratsiraka of Madagascar refused to accept results of a recount of votes cast in the election that brought him power last December: hundreds of thousands have been demonstrating against his continuing in office. Baron Hans Heinrich von Thyssen, the great Swiss art collector, died, aged 81.