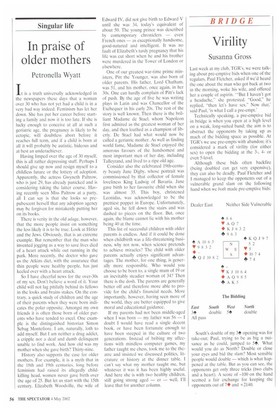 In praise of older mothers

It is a truth universally acknowledged in the newspapers these days that a woman over 30 who has not yet had a child is in a very bad way indeed. Feminism has let her down. She has put her career before starting a family and now it is too late. If she is lucky enough to conceive at all at such a geriatric age, the pregnancy is likely to be ectopic, will doubtless abort before it reaches full term, and if a child is born at all it will probably be autistic, hideous and at best an underachiever.

Having limped over the age of 30 myself, this is all rather depressing stuff. Perhaps I should give up now and resign myself to a childless future or the lottery of adoption. Apparently, the actress Gwyneth Paltrow, who is just 29, has already panicked and is considering taking the latter course. Having recently seen Miss Paltrow at a party, all I can say is that she looks so prepubescent herself that any adoption agency may be forgiven for mistakenly putting her on its books.

There is verity in the old adage, however, that the more people insist on something the less likely it is to be true. Look at Hitler and the Jews. Obviously, that is an extreme example. But remember that the man who invented jogging as a way to save lives died of a heart attack while out running in the park. More recently, the doctor who gave us the Atkins diet, with the assurance that thin people were healthy people, has just keeled over with a heart attack.

So I have cheerful news for the over-30s of my sex. Don't believe a word of it. Your child will not lag pitifully behind its fellows in the looks and brains stakes. On the contrary, a quick study of children and the age of their parents when they were born indicates the polar opposite. Amongst my own friends it is often those born of older parents who have tended to excel. One example is the distinguished historian Simon Sebag Montefiore. I am, naturally, loth to add myself. But I am neither a drug addict, a cripple nor a deaf and dumb delinquent unable to find work. And how old was my mother when she gave birth? Thirty-nine.

History also supports the case for older mothers. For example, it is a myth that in the 18th and 19th centuries, long before feminism had raised its allegedly childkilling head, women never gave birth over the age of 25. But let us start with the 15th century. Elizabeth Woodville, the wife of Edward IV, did not give birth to Edward V until she was 34, today's equivalent of about 50. The young prince was described by contemporary chroniclers — even French ones — as exceptionally handsome, good-natured and intelligent. It was no fault of Elizabeth's tardy pregnancy that his life was cut short when he and his brother were murdered in the Tower of London or elsewhere.

One of our greatest war-time prime ministers, Pitt the Younger, was also born of older parents. His father, Lord Chatham, was 51, and his mother, once again, in her 30s. One can hardly complain of Pitt's lack of push. By the age of five he was writing plays in Latin and was Chancellor of the Exchequer in his early 20s, The rest of the story is well known. Then there is the brilliant Madame de Stael. whom Napoleon first admired as the greatest woman of her day, and then loathed as a champion of liberty. De Stael had what would now be called a geriatric mother. As well as finding world fame, Madame de Stael enjoyed the amorous favours of the handsomest and most important men of her day, including Talleyrand, and lived to a ripe old age.

Consider also the celebrated 19th-century beauty Jane Digby, whose portrait was commissioned by that collector of female loveliness King Ludwig of Bavaria. Jane gave birth to her favourite child when she was almost 35. This boy, christened Leonidas, was acknowledged to be the prettiest poppet in Europe. Unfortunately, aged six, he fell down the stairs and was dashed to pieces on the floor. But, once again, the blame cannot lie with his mother being 40 at the time.

This list of successful children with older parents is endless. And if it could be done when childbirth was a life-threatening business, why not now, when science pretends to achieve miracles? The child with older parents actually enjoys significant advantages. The mother, for one thing. is generally more responsible. Who would you choose to be born to, a single mum of 19 or an inevitably steadier woman of 34? Then there is the dosh. The parents are generally better off and therefore more able to provide for the child's financial needs. More importantly, however, having seen more of the world, they are better equipped to give moral and educational guidance.

If my parents had not been middle-aged when I was born — my father was 56 — I doubt I would have read a single decent book, or have been fortunate enough to have been steeped in the culture of two generations. Instead of bribing my affections with mindless computer games, my father taught me chess, took me to the theatre and insisted we discussed politics, literature or history at the dinner table. I can't say what my mother taught me, but whatever it was it has been highly useful. And here she is with two healthy children, still going strong aged — er — well, I'll leave that for another column.