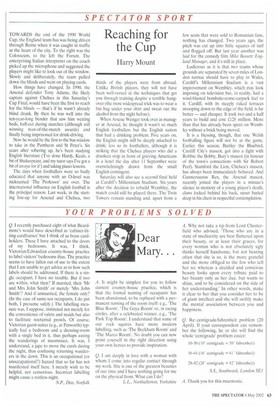 Reaching for the Cup

TOWARDS the end of the 1990 World Cup, the England team bus was being driven through Rome when it was caught in traffic at the heart of the city. To the right was the Colosseum, to the left the Forum. The enterprising Italian interpreter on the coach picked up the microphone and suggested the players might like to look out of the window. Slowly and deliberately, the team pulled down the blinds and went on playing cards.

How things have changed. In 1990, the Arsenal defender Tony Adams, the likely captain against Chelsea in this Saturday's Cup Final, would have been the first to reach for the blinds — that's if he wasn't already blind drunk. By then he was well into the ten-year-long bender that saw him wetting beds, half-cut during matches (although still winning man-of-the-match awards) and finally being imprisoned for drink-driving.

Now he would be the first to the bus window to take in the Pantheon and St Peter's. Six years after sobering up, he's been studying English literature (I've done Hardy, Keats, a bit of Shakespeare, and my tutor says I've got a bit of an eye for it') and taking piano lessons.

The days when footballers were so badly educated that anyone with an 0-level was nicknamed The Professor' are over. The international influence on English football is the principal reason. Last week, in the starting line-up for Arsenal and Chelsea, two thirds of the players were from abroad. Unlike British players, they will not have been well-versed in the techniques that get you through training despite a terrible hangover (the most widespread trick was to wear a bin bag under your shirt and sweat out the alcohol from the night before).

When Arsene Wenger took over as manager at Arsenal, he thought it wasn't so much English footballers but the English nation that had a drinking problem. Five years on, the English might still be deeply attached to drink; less so its footballers, although it is striking that the Chelsea players who did a drunken strip in front of grieving Americans in a hotel the day after 11 September were overwhelmingly drawn from the small English contingent.

Saturday will also see a second final held at Cardiff's Millennium Stadium. Six years after the decision to rebuild Wembley, the match could still be played there. The Twin Towers remain standing and, apart from a few seats that were sold to Romanian fans, nothing has changed. Two years ago, the pitch was cut up into little squares of turf and flogged off. But last year another was laid for the comedy film Mike Bassett: England Manager, and it's still in place.

Ludicrous as it is that two teams whose grounds are separated by seven miles of London tarmac should have to play in Wales, Cardiff's Millennium Stadium is a vast improvement on Wembley, which may look imposing on television but, in reality, had a wind-blasted bombsite-come-carpark feel to it. Cardiff, with its steeply raked terraces swooping down to the edge of the field, is far better — and cheaper. It took two and a half years to build and cost £128 million. More than that has already been spent on Wembley without a brick being moved.

It is a blessing, though, that one Welsh footballing figure will not be at the game. Earlier this season, Bartley the Bluebird, Cardiff City's mascot, got into a fight with Robbie the Bobby. Bury's mascot (in honour of the town's connections with Sir Robert Peel). Stamford the Lion, Chelsea's mascot, has always been immaculately behaved. And Gunnersaurus Rex, the Arsenal mascot, recently joined the players in a minute's silence in memory of a young player's death, claws locked behind his back, snout buried deep in his chest in respectful contemplation.