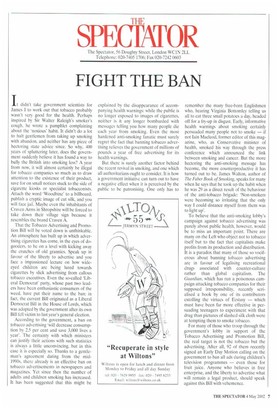 It didn't take government scientists for James I to work out that tobacco probably wasn't very good for the health. Perhaps inspired by Sir Walter Raleigh's smoker's cough, he wrote a pamphlet complaining about the 'noxious' habit. It didn't do a lot to halt gentlemen from taking up smoking with abandon, and neither has any piece of hectoring state advice since. So why, 400 years of spluttering later, does the government suddenly believe it has found a way to bully the British into smoking less? A year from now, it will almost certainly be illegal for tobacco companies so much as to draw attention to the existence of their product, save for on small notices stuck to the side of cigarette kiosks or specialist tobacconists. Attach the word 'Woodbine' to a billboard, publish a cryptic image of cut silk, and you will face jail. Maybe even the inhabitants of Craven Arms in Shropshire will be forced to take down their village sign because it resembles the brand Craven A.

That the Tobacco Advertising and Promotion Bill will be voted down is unthinkable. An atmosphere has built up in which advertising cigarettes has come, in the eyes of dogooders, to be on a level with kicking away the crutches of old grannies. Speak up in favour of the liberty to advertise and you face a impassioned lecture on how wideeyed children are being lured towards cigarettes by slick advertising from callous tobacco executives. Even the so-called 'Liberal Democrat' party, whose past two leaders have been enthusiastic consumers of the weed, have put their name to the ban; in fact, the current Bill originated as a Liberal Democrat Bill in the House of Lords, which was adopted by the government after its own Bill fell victim to last year's general election.

According to the government, a ban on tobacco advertising 'will decrease consumption by 2.5 per cent and save 3,000 lives a year'. The certainty with which ministers can justify their actions with such statistics is always a little unconvincing, but in this case it is especially so. Thanks to a gentleman's agreement dating from the mid1990s. there already is an effective ban on tobacco advertisements in newspapers and magazines. Yet since then the number of adults and children smoking has increased. It has been suggested that this might be explained by the disappearance of accompanying health warnings: while the public is no longer exposed to images of cigarettes, neither is it any longer bombarded with messages telling you how many people die each year from smoking. Even the most hardened anti-smoking fanatic must surely regret the fact that banning tobacco advertising relieves the government of millions of pounds a year of free advertising for its health warnings.

But there is surely another factor behind the recent revival in smoking, and one which all authoritarians ought to consider. It is how a government initiative can turn out to have a negative effect when it is perceived by the public to be patronising. One only has to

remember the many free-born Englishmen who, hearing Virginia Bottomley telling us all to eat three small potatoes a day, headed off for a fry-up in disgust. Early, informative health warnings about smoking certainly persuaded many people not to smoke — if not lain Macleod, former editor of this magazine, who, as Conservative minister of health, smoked his way through the press conference which announced the link between smoking and cancer. But the more hectoring the anti-smoking message has become, the more counterproductive it has turned out to be. James Walton, author of The Faber Book of Smoking, speaks for many when he says that he took up the habit when he was 29 as a direct result of the behaviour of the anti-tobacco brigade: 'Non-smokers were becoming so irritating that the only way I could distance myself from them was to light up'.

To believe that the anti-smoking lobby's campaign against tobacco advertising was purely about public health, however, would be to miss an important point. There are many on the Left who object not to tobacco itself but to the fact that capitalists make profits from its production and distribution. It is a paradox that many of those so vociferous about banning tobacco advertising are in favour of legalising recreational drugs associated with counter-culture rather than global capitalism. The Guardian, which has run a poisonous campaign attacking tobacco companies for their supposed irresponsibility, recently serialised a book by one of its contributors extolling the virtues of Ecstasy — which must have been far more effective in persuading teenagers to experiment with that drug than pictures of slashed silk cloth were at tempting them to smoke tobacco.

For many of those who troop through the government's lobby in support of the Tobacco Advertising and Promotion Bill, the real target is not the tobacco but the advertising. After all, 92 of them recently signed an Early Day Motion calling on the government to ban all ads during children's television programmes — even those for fruit juice. Anyone who believes in free enterprise, and the liberty to advertise what will remain a legal product, should speak against this Bill with vehemence.