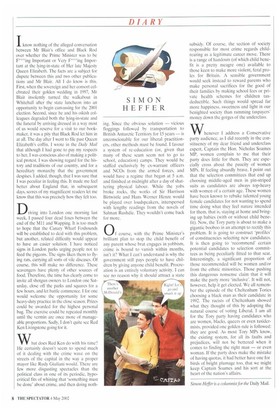 Iknow nothing of the alleged conversation between Mr Blair's office and Black Rod over whether the Prime Minister was to be F'ing Important or Very Frning Important at the lying-in-state of Her late Majesty Queen Elizabeth. The facts are a subject for dispute between this and two other publications and Mr Blair. All I do know is this. First, when the sovereign and her consort celebrated their golden wedding in 1997, Mr Blair insolently turned the walkabout in Whitehall after the state luncheon into an opportunity to begin canvassing for the 2001 election. Second, since he and his oikish colleagues degraded both the lying-in-state and the funeral by arriving dressed in a way most of us would reserve for a visit to our bookmaker, it was a pity that Black Rod let him in at all. The day after I went to file past Queen Elizabeth's coffin, I wrote in the Daily Mail that although I had gone to pay my respects to her, I was conscious also of making a political protest. I was showing regard for the history and traditions of our country, and for a hereditary monarchy that the government despises. I added, though, that I was sure that I was peculiar in feeling this. It made me feel better about England that, in subsequent days, scores of my magnificent readers let me know that this was precisely how they felt too.

Driving into London one morning last week. I passed four dead foxes between the end of the MII and Wapping. It is too much to hope that the Canary Wharf Foxhounds will be established to deal with this problem, but another, related difficulty would appear to have an easier solution. I have noticed signs in London parks urging people not to feed the pigeons. The signs liken them to flying rats, carrying all sorts of vile diseases. Of course, this will make no difference. These scavengers have plenty of other sources of food. Therefore, the time has clearly come to invite all shotgun owners to London one Saturday, close off the parks and squares for a few hours, and let battle commence. I for one would welcome the opportunity for some heavy-duty practice in the close season. Prizes could be awarded for the highest personal bag. The exercise could be repeated monthly until the vermin are once more of manageable proportions. Sadly, I don't quite see Red Ken Livingstone going for it.

What does Red Ken do with his time? He certainly doesn't seem to spend much of it dealing with the crime wave on the streets of the capital in the way a proper mayor like Rudy Giuliani would. There are few more disgusting spectacles than the political class in one of its periodic, hypocritical fits of whining that 'something must be done' about crime, and then doing noth

ing. Since the obvious solution — vicious floggings followed by transportation to British Antarctic Territory for 15 years — is unconscionable for our liberal practitioners, other methods must be found. I favour a system of re-education (or, given that many of these scum seem not to go to school, education) camps. They would be staffed exclusively by ex-warrant officers and NCOs from the armed forces, and would have a regime that began at 5 a.m. and finished at midnight after a day of shattering physical labour. While the yobs broke rocks, the works of Sir Harrison Birtwistle and Hans Werner Henze would be played over loudspeakers, interspersed with lengthy readings from the novels of Salman Rushdie. They wouldn't come back for more.

0 t course, with the Prime Minister's brilliant plan to stop the child benefit of any parent whose brat engages in yobbism, crime is bound to vanish within months, isn't it? What I can't understand is why the government still pays people to have children by giving anyone child benefit. Procreation is an entirely voluntary activity. I can

see no reason why it should attract a state subsidy. Of course, the section of society responsible for most crime regards childrearing as a legitimate career move. There is a range of handouts (of which child benefit is a pretty meagre one) available to those keen to make more violent, feral proles for Britain. A sensible government would seek instead to reward parents who make personal sacrifices for the good of their families by making school fees or private health schemes for children taxdeductible. Such things would spread far more happiness, sweetness and light in our benighted society than ramming taxpayers' money down the gorges of the underclass.

Whenever I address a Conservative party audience, as I did recently in the constituency of my dear friend and underclass expert, Captain the Hon. Nicholas Soames MP, women complain to me that their party does little for them. They are especially cross about the paucity of women MPs. If feeling absurdly brave, I point out that the selection committees that end up choosing middle-aged men in pin-striped suits as candidates are always top-heavy with women of a certain age. These women have been known to rebuke talented young female candidates for not wanting to spend time doing what they feel nature intended for them, that is, staying at home and bringing up babies (with or without child benefit). Now, the Tory party is about to make a gigantic booboo in an attempt to rectify this problem. It is going to construct 'profiles' of constituencies selecting new candidates. It is then going to 'recommend' certain potential candidates to selection committees as being peculiarly fitted to that seat. Interestingly, a significant proportion of those recommended will be women and/or from the ethnic minorities. Those pushing this dangerous nonsense claim that it will make the party more 'inclusive'. It will not, however, help it get elected. We all remember the episode of the Cheltenham Tories choosing a black man as their candidate in 1992. The racists of Cheltenham showed what they thought of this by adopting the natural course of voting Liberal. I am all for the Tory party having candidates who are women, blacks. queers or even taxidermists, provided one golden rule is followed: they are good. As most Tory MPs know, the existing system, for all its faults and prejudices, will not be bettered when it comes to finding the right man — or even woman. If the party does make the mistake of having quotas, it had better have one for birds of bright plumage too, that we might keep Captain Soames and his sort at the heart of the nation's affairs.

Simon Heifer is a columnist for the Daily Mail.