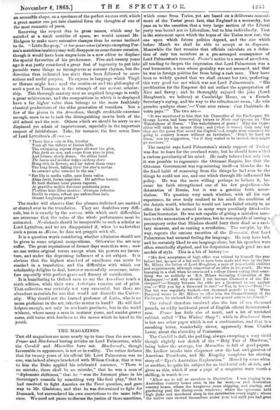 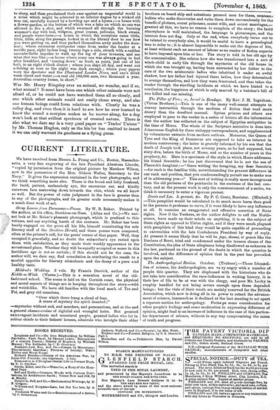 Tun old magazines are more nearly up to time than the new ones, Fraser and Blackwood having articles on Lord Palmerston, while the Cornhill and Macmillan have not. Blackwood's, though favourable in appearance, is not so in reality. The writer declares that for twenty years of his official life Lord Palmerston was no one, was indeed always bracketed with Wilson Croker, that it was to him the Duke applied his celebrated sentence, " There is no mistake, there shall be no mistake," that he was a man of "diplomatic shiftiness," that he "won the foremost place in his Sovereign's councils by something very like foul play," that he had resolved to fight America on the Trent question, and gave way to Mr. Gladstone, and that he was determined to fight for Denmark, but surrendered his own convictions to the same influ- ence. We need not pause to discuss the justice of these assertions, which come from Tories, yet are based on a deliberate conceal- ment of the Tories' great fact, that England is a monarchy, but pass on to the assertion that a very large section of the Liberal party was bound not to Liberalism, but to him individually. That is the statement upon which the hopes of the Tories now rest, the one upon which future politics depend, and the one which before March we shall be able to accept or to disprove. Meanwhile the fact remains that officials calculate on a defec- tion of only ten members as a pre-arranged consequence of Lord Pahnerston's removal. Fraser's notice is a mass of anecdotes, all tending to deepen the impression that Lord Palmerston was a real humourist, a man whose geniality was not assumed, and that he was in foreign politics far from being a rash man. They have been so widely quoted that we shall extract but two, preferring this very good bon mot which was not Lord Palmerston's. " His predilection for the Emperor did not outlast the appropriation of Nice and Savoy ; and he thoroughly enjoyed the joke (Lord Houghton's, we believe) at Cambridge House, on a French Secretary's saying, and his way to the refreshment-room, vais prendre quelque chose.'—‘ Vous avez raison : c'est l'habitude de votre papa" The two are— "It was mentioned to him that his Chancellor of the Exchequer, Sir George Lewis, had been writing letters to Notes and Queries on 'The Wakefulness of Geese.' The wakefulness of geese ! Why the Oppo- sition will think he means them; and (what is worse) they may say they are the geese that saved the Capitol.'—A couple were censured for going to country houses without an invitation.' Don't be hard on them,' was his suggestion, 'for if they waited to be invited, they might go nowhere.' " The essayist says Lord Palmerston's steady support of Turkey was due to fears for the overland route, but he should have added a curious peculiarity of his mind. He really believed not only that it was possible to regenerate the Ottoman Empire, but that the Ottoman Government was regenerating itself—a blunder due to the fixed habit of reasoning from the things he had seen to the things he could not see, and one which through life influenced his policy. He was the more willing perhaps to believe it, be- cause his faith strengthened one of his few prejudices—his detestation of Russia, but it was a genuine faith never- theless. We question very much whether, with all his vast experience, he ever truly realized to his mind the condition of the Asiatic world, whether he would not have failed utterly in an office for which he seemed in many ways peculiarly fitted—the Indian Secretariat. He was not capable of giving a mistaken sane- r. tion to the annexation of a province, but he was capable of issuing a , peremptory order that Hindoos should bury their dead as a sani- tary measure, and so causing a revolution. The essayist, by the way, repeats the curious assertion of the Economist, that Lord Palmerston had unusual feeling for language. He may have had, and he certainly liked to see language clear, but his speeches were often wretchedly slipshod, and his despatches though good are not models of style. This is a bit of history :— "His first acceptance of high office was related by himself the year before last, apropos of a bet said to have been made and won by the late Mr. Mikes, the father of Lord Houghton, a man of remarkable abilities and acquirements, although somewhat of an idler in his youth. Ho was lounging in a club when he overboard a college friend saying that some- thing was as unlikely as 'BA Mikes becoming Chancellor of the Exchequer.'—'And why should I not become Chancellor of the Ex- chequer?'—' Simply because the odds are a thousand to one against you.'—' Will you lay a thousand to one?'—' Yes, in tens'—'Done!'- The bet was regularly booked—ten thousand pounds to ton. When Percoval wrote to Mr. Milnos to offer him the Chancellorship of the Exchequer, he enclosed the offer with a ten-pound note to his friend."

The refusal therefore involved also the loss of ten thousand pounds, an oddly incidental proof of English official disinterested- ness. Fraser has little else of merit, and a bit of wretched rubbish called "The Wishes' Shop " ; while in Blackwood there is but one other paper which is not a continuation, and that is a smashing letter, wonderfully clever, apparently from Charles Lever, about the absurdity of Fenianism.

The Cornhill is dull, the padding, always excepting a very vivid though slightly raw sketch of the " Holy Fair of Hurdwar," being below the average, but Macmillan is full of good papers. Mr. Ludlow breaks into eloquence over the last and greatest of American Presidents, and Mr. Kingsley completes his stirring

story of." Eyre's Australian Exploration." Moved by some whim or another, he quite his subject for an incidental side sketch, and gives us this, which if ever a page of a magazine were worth a shilling, is worth it :-

"Allow me to tell an anecdote in illustration. I was staying in an Australian country house once, in the far west,—a real Australian country house, where the kangaroos came skipping, and staring, and gandering past the dining-room windows ; where the opossums hold high jinks and murdered sleep in the shrubberies every night ; where the native cats stowed themselves under your bed until you had gone to sleep, and then proclaimed their came-against an ungrateful world in a noise which might be achieved in an inferior degree by a wicked old tom cat, carefully trained by a howling ape and a hyena ;—a house with a flower-garden, at the bottom of which was a lake on which no one was allowed to fire a shot, and which swarmed all through the burning summer's day with teal, widgeon, great cranes, pelicans, black swans, and purple water-hens ;—a house in which the scorpions came tittle, tittle, tittle, along the passage, looked in at the library door to see how you were getting on, and then packed themselves away under the door- mat ; where enormous centipedes came from under the fender at a terrific pace, eight inches long, twenty legs a side, struck with a sudden uncontrollable impulse to walk up the leg of your trousers, and see what that was like ;—a house where some one was always going to bed after breakfast, and 'coming down' as fresh as paint, just out of his bath, to an eight o'clock dinner ; where you slept all day, and went out a-fishing as soon as the night was dark enough ; where your papers were the Spectator and the Illustrated London News, and one's drink weak claret and water ;—a real old 100,000 acre, two thousand a year, Australian country house, in short."

Was Mr. Henry Kingsley ever an animal, we wonder, and if so, what animal ? It must have been one which other animals were not afraid of, or he could not have watched them all so closely, and one which other animals could not easily chase away, and also one human beings could form relations with. Clearly he was a colley dog, and even then it is hard to see how he ever learned to know the sound a scorpion makes as he moves along, for a dog won't look at that evillest specimen of created nature. There is also what we dare say is a very good paper on " Trades' 'Unions" by Mr. Thomas Hughes, only as the 'hillier has omitted to insert it we can only warrant its goodness as a flying guess.