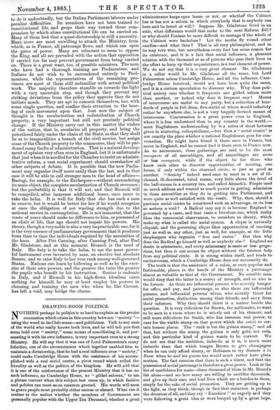 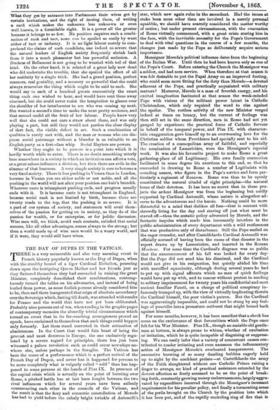 NOTHING perhaps in politics is so hard to explain as the precise connection which exists in this country between "society"— using the word in its Club sense—and politicians. Talk to any man of the world who really knows both lives, and he will tell you that some hold over " society," some means of conciliating it, and per- meating it with its own influence, is very important even to a strong Ministry. He will say that it was one of Lord Palmerston's many felicities, one of the circumstances which together enabled him to maintain a dictatorship, that he had a real influence over " society," could make Cambridge House with the assistance of his accom- plished wife a real social centre, a pivot round which rolled the frivolity as well as the politics of the kingdom. He will add that it is one of the misfortunes of the present Ministry that it has no such influence, no Cambridge House, no " gilded saloons," to use a phrase current when this subject last came up, in which fashion and politics can meet as on common ground. His words will seem to grave people most probably either untrue or absurd. What can it matter to the nation whether the members of Government are personally popular with the Upper Ten Thousand, whether a great administrator keeps open house or not, or whethe? the Cabinet has or has not a saloon in which everybody that is anybody can bore and be bored at will ? Suppose Mr. Gladstone lived in an attic, what difference would that make to the next Reform Bill? or why should Fenians be more difficult to manage if the whole of the Cabinet were bachelors ? Let the moths fly round other candles—and what then ? That is all very philosophical, and in its way very true, but nevertheless every fact has some reason for its existence, and it is a fact that social influence, a pleasant relation with the thousand or so of persons who pass their lives in the effort to keep up their acquaintance, is a real element of power. We do not say that it is a very great element. Mr. Gladstone iu a cellar would be Mr. Gladstone all the same, but Lord Palmerston minus Cambridge House, and all the influence Cam- bridge House involved, would not have been quite the same, and it is a curious speculation to discover why. Why does poli- tical society care whether it frequents one gilded saloon more than another, or indeed why does it frequent any? Means of intercourse are useful to any party, but a collection of hun- dreds of people in full dress, five-sixths of whom would infinitely rather be anywhere else, is not a very happily devised means of intercourse. Conversation is a great power even in England, where it is less understood than in any country in the world,— most Englishmen understanding by it a series of short lectures given in stuttering colloquialisms,—but then a " social centre" is not exactly the place whither a rational Englishman goes for con- versation. He might have found it there once in France, but never in England, and he cannot find it there even in France now. As to amusement, these gatherings are said to be the most ennuyants of all assemblages, and all assemblages are more or lees ennuyants, while if the object be for those who know each other to discover opportunities of meeting, one house, if only within the charmed circle, is just as good as another. " Society " indeed used once to meet in a set of ill- cleaned, ill-decorated, hired rooms, very little above the level of the ball-rooms in a country inn, and called Almack's. People used as much address and wasted as much power in getting admission to those assemblies as they do in getting into Parliament, and were quite as well satisfied with the result. Why, then, should a partizan social centre be considered such an advantage, or its loss so serious a void? A Radical may say it is because England is governed by a caste, and that caste a frivolous one, which really likes the ceremonial observances, to outsiders so dreary, which make up what is called the social system. A clique is naturally cliquish, and the governing clique likes opportunities of meeting just as well as any other, just as well, for example, as the little shopkeepers who organize " free and eagles." But then why does the Radical go himself as well as anybody else ? England no doubt is aristocratic, and every aristocracy is more or lees grega- rious, but then it can secure its object without the faintest help from any political circle. It is strong within itself, and tends to- exclusiveness, which a Cambridge House does not necessarily do.

The truth is that the assistance of a salon, at once popular and fashionable, places in the hands of the Ministry a patronage- almost as valuable as that of the Government. No sensible man would deny that the latter is a source of strength, and so also is the former. As there are influential persons who secretly hunger for office, and pay, and patronage, so also there are influential persons, and influential persons' wives, who secretly thirst for social promotion, distinction among their friends, and envy from their inferiors. Why they should thirst is a matter beside the question. It is very ridiculous for Brown, the millionaire, to want to be seen in a room where he is utterly out of his element, and still more ridiculous for Smith, who has immense real power, to care for the visible stamp on that power which the entrée to cer- tain houses places. The "rank is but the guinea stamp," and all that, but without the stamp the guinea is only gold, not coin, and this particular kind of guinea wants to be current. We do not see that the ambition, imbecile as it is, is much more imbecile than that which tempts Brown to give champagne when he can only afford sherry, or Robinson to try dinners /i la Russe when he and his guests too would much rather have plain mutton. The fact remains that there is such a thirst, and that the possession of social patronage is therefore a great power. Look at the list of candidates for seats—three thousand of them in Mr. Brand's list alone—and see how many are willing to sacrifice thousands, and give up their ease, and lead lives which are a burden to them, simply for the sake of social promotion. They are getting up to the light, as they think, though in fact that eminence is perhaps the dreariest of all, and they cry " Excelsior !" as eagerly as if they were following a great idea or were buoyed up by a great hope. What they get by entrance into Parliament their wives get by certain invitations, and the right of issuing them, of writing a card which makes the unknown less unknown or even well known, is a formidable right. It is a power all the greater beeause it belongs to so few. No position requires such a combi- nation of rank and tact, none can be spoiled so easily by want either of tact or industry. It is no light labour merely to com- prehend the claims of each candidate, one indeed so severe that the natural leaders of English society frequently shrink back from it into a much pleasanter but less powerful seclusion. A Duchess of Bellamont is not going to be wearied with toil of that kind. On the other hand, it is related of a great lady now dead who did undertake the trouble, that she spoiled the effect of all her assiduity by a single trick. She had a grand position, perfect manners, real geniality, and a memory so powerful that she could always remember the thing which ought to be said to each. She would say to each of a hundred guests successively the exact thing each one wished to hear, and would have sent them away charmed, but she could never resist the temptation to glance over the shoulder of her interlocutor to see who was coming up next. She wanted a second's time to make the next pretty sentence, and that second undid all the fruit of her labour. People knew very well that she could not care a straw about them, and was only playing a part, but still they would not pardon the clear display of that fact, the visible defect in art. Such a combination of qualities is rarely met with, and the man or woman who can dis- pense social patronage without a blunder is as valuable to an English party as a first-class whip. Social Hayters are powers. Whether they ought to be powers is a point into which it is hardly worth while to enter. There is no doubt something utterly base somewhere in a society in which an invitation can affect a vote, or a great saloon influence a division, but then there are evils in the absence of that baseness. A very simple society is sure to become a very fixed society. There is less pushing in Vienna than in London, because in Vienna you are either noble or not noble, and all the pushing in the world will not alter your position one hair's breadth. Wherever caste is triumphant pushing ends, and progress usually ends with it. It is because caste is not triumphant in England, because social rank is not limited by birth, because there are twenty roads to the top, that the pushing is so severe. It is a part of our system of society, and statesmen will avail them- selves of the passion for getting on in society, as they do of the passion for wealth, or for enterprise, or for public discussion. Wise men will we think, avoid such contests, satisfied that social success, like all other advantages, comes always to the strong ; but then a world made up of wise men would be a weary world, and if it were, they would still have wives.