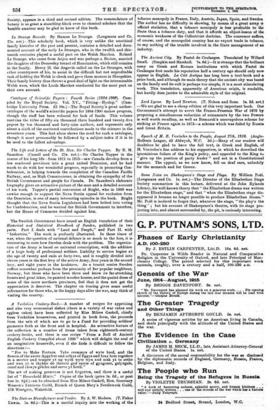 The Ancient City. By Fustel de Coulanges. Translated by Willard

Small. (Simpkin and Marshall. 7s. 6d.)—It is strange that the brilliant essay on Greek and Roman institutions with which Festal de Coulanges first made his reputation half a century ago should only now appear in English. La Citi Antique has long been a text-book and a prize-book, and although its main theory that the ancient city was based on the family and its cult is perhaps too simple, it is a most stimulating work. This translation, apparently of American origin, is readable, but hardly does justice to the admirable style of the originaL