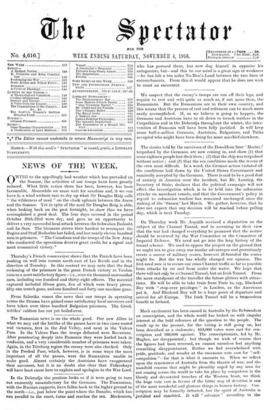 The Rumanian news is on the whole good. Our new

Allies in what we may call the battles of the passes have in two cases scored real victories, first in the Jiul Valley, and next in the Vulcan Pass. In the Vulcan Pass the troops defeated were Bavarians. After penetrating deeply into Rumania they were hurled back in confusion, and a very considerable number of prisoners were taken. Again, in the Torzburg region the enemy were also checked. Only in the Predeal Pass, which, however, is in some ways the most important of all the passes, were the Rumanians unable to make good. Almost certainly the Austrians have exaggerated their successes, but it is no doubt also clear that Falkenhayn will have least cause here to explain and apologize to the War Lord.