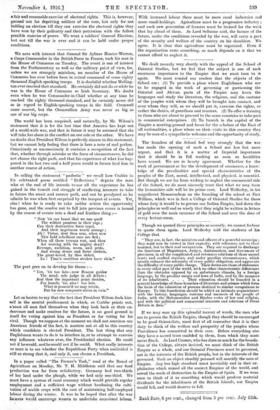 Page 15, 4 November 1916 — Though we quoted these principles so recently, we cannot forbear
Close

Though we quoted these principles so recently, we cannot forbear

to quote them again. Lord Wellesley told the students of his College that

" They are, in fact, the ministers and officers of a powerful sovereign; they must now be viewed in that capacity, with reference, not to their nominal, but to their real occupations. They are required to discharge the functions of Magistrates, Judges, Ambassadors, and Governors of provinces, in all the complicated and extensive relations of those sacred trusts and exalted stations, and under peculiar circumstances, which greatly-enhance the solemnity of every public obligation, and aggravate the difficulty of every public charge. Their duties are those of statesmen in every other part of the world, with no other characteristic differences than the obstacles opposed by an unfortunate climate, by a foreign language, by the peculiar usages and laws of India, and by the manner. of its inhabitants. . . . Their education should be founded in a general knowledge of those branches of literature and 80b31100 whioh form the basis of the education of persons destined to similar occupations. is Europe. To this foundation should be added an intimate acquaintance with the history, languages, customs and manners of the people of India, with tho Mahommeden and Hindoo codes of law and religion, and with the political and commercial interests and relations of Great Britain in Asia."