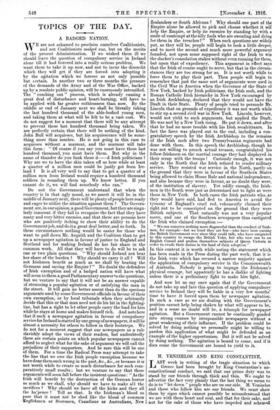 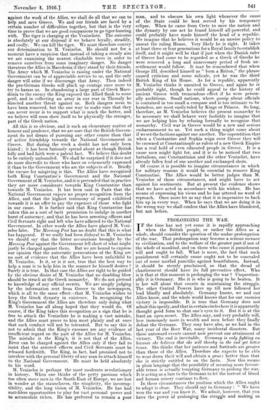 TAST week in writing of the tragic situation to which Greece had been brought by King Constantine's un- constitutional conduct, we said that our prime duty was to stand by our friends through thick and thin. We ought to advertise the fact very plainly that the-last thing we mean to do is to " let down " people who are on our side. M. Venizelos and those who follow him are our friends. We must- show them by signs which cannot possibly be misunderstood that we are with them heart and soul, and that for their sake, and not for the sake' of those who have impeded and schemed against the work of the Allies, we shall do all that we can to help and save Greece. We and our friends are faced by a certain number of difficulties together, but that is the 'very time to prove that we are good companions to go tiger-hunting with. The tiger is charging at the Venizelists. The outcome is absolutely at our disposal if we behave loyally, steadily, and coolly. We can kill the tiger. We must therefore convey our determination to M. Venizelos. He should not for a moment have a suspicion that instead of taking a steady aim we are examining the nearest. climbable trees in order to remove ourselves from some imaginary danger. No danger threatens the Allies in Macedonia if they stand by their friends. The Army which M. Venizelos is raising under the National Government can be of appreciable service to us, and the only danger will arise if we discourage that Army. Then indeed the pro-German Greeks will pluck up courage once more to try to harass us. In abandoning a large part of Greek Mace- donia to the enemy the King exposed the Allied flank to some peril, and in collecting an army in our rear in Thessaly he directed another threat against us. Both dangers seem to have been removed, but the one way to make sure that they can never recur is to support what is much the better, and we believe will soon show itself to be physically the stronger, part Of the Greek nation.

All this is so obvious, and is such an elementary matter of honour and prudence, that we are sure that the British Govern- ment do not dream of pursuing any other course than that of active friendship towards the National Government in Greece. But during the week a doubt has not only been hinted ; it has been furiously spread about as though British folly and bad faith were a patent fact. We believe this doubt to be entirely unfounded. We shall be surprised if it does not do more discredit to those who have so vehemently expressed it than to the Government who are the subjects of it. Briefly the excuse for misgiving is this. The Allies have recognized both King Constantine's Government and the National Government of M. Venizelos, and it is pretended that in practice they are more considerate towards King Constantine than towards M. Venizelos. It has been said in Paris that the National Government enjoys no proper recognition from the Allies, and that the highest testimony of regard exhibited towards it is an offer to pay the expenses of those who fight in our cause. It is further said that King Constantine has taken this as a sort of tacit permission to indulge in another burst of autocracy, and that he has been arresting officers and Civil Servants right and left who have adhered to the National Government. In other words the Allies have played M. Veni- zelos false. The Morning Post has no doubt that this is what has happened. If we really had been disloyal to M. Venizelos we should say that the bitter accusations brought by the Morning Post against the Government fell short of what might justly be charged against them. But we are bound to express our opinion that the autocratic persecutions of the King arc no sort of evidence that the Allies have been unfaithful to M. Venizelos. Is it, or is it not, true that the best way to help a man is to help him in the manner he himself desires ? Surely it is true. In that case the Allies are right to be guided by the obvious desire of M. Venizelos that no disabling blow should be struck at the Greek monarchy. We do not pretend to knowledge of any official secrets. We are simply judging by the information sent from Greece to the newspapers, which is all to the same effect—that M. Venizelos wishes to keep the Greek dynasty in existence. In recognizing the King's Government the Allies are therefore only doing what M. Venizelos has all along hoped that they would do. Of course, if the King takes this recognition as a sign that he is free to attack the Venizelists he is making a vast mistake, and the Allies must prove to him most plainly and at once that such conduct will not be tolerated. But to say this is not to admit that the King's excesses are any evidence of insufficient regard on the part of the Allies for M. Venizelos. The mistake is the King's, it is not that of the Allies. Error can be charged against the Allies only if they fail to insist that the arrested officers and Civil Servants must be released forthwith. The King, in fact, had promised not to interfere with the personal liberty of any man to attach himself to the National Government. He must be held absolutely to his word.

M. Venizelos is perhaps the most moderate revolutionary in history. When one thinks of the petty passions which too often move men in the South-East of Europe, we are lost in wonder at the staunchness, the simplicity, the incorrup- tibility, and the long vision of M. Venizelos. He has had matchless opportunities to play for vast personal power and to accumulate riches. He has preferred to remain a poor man, and to obscure his own light whenever the cause of the State could be best served by his temporary eclipse. When he came from Crete to save the nation and the dynasty by one act he found himself all-powerful, and could probably have made himself the head of a republic. We imagine that he believes it would be an unwise policy to unseat the ruling House. Very likely he is right. It takes at least three or four generations for a Royal family to establish itself, and it might well be that if just when the Danish ruler of Greece had come to be regarded as a Greek of Greeks he were removed a long and unnecessary period of fresh un- settlement would follow. It may be remembered that when George III. described himself as " born a Briton," the phrase caused criticism and some ridicule, yet he was the third British King of his House. As for a republic, apparently M. Venizelos thinks it unsuited to Greece, and again he is probably right, though he could appeal to the history of ancient Greece with tremendous effect if he were person- ally ambitious. Small nations, where gossip about officials is contained in too small a compass and is too intimate to be harmless, are most easily ruled by Kings or Princes. So long, therefore, as M. Venizelos believes the present monarchy to be necessary we shall behave very foolishly to imagine that we are helping him by refusing formally to recognize that monarchy. Civil war in Greece would be a new and serious embarrassment to us. Yet such a thing might come about if we set the factions against one another. The superstition that when a Constantine and Sophia reign over Greece they will be crowned at Constantinople as rulers of a new Greek Empire has a real hold of even educated people in Greece. It is a cause men might fight for, and it is to be noticed that two battalions, one Constantinian and the other Venizelist, have already fallen foul of one another and exchanged shots. Of course it is possible to imagine circumstances in which for military reasons it would be essential to remove King Constantine. The Allies would be better judges than M. Venizelos of those circumstances, and might have to act against his sentiments. But at present the evidence shows that we have acted in accordance with his wishes. He has means of expressing his views and he has uttered no word of reproach. Once more let us say that it is imperative to back him up in every way. When he says that we are doing it in the wrong way we shall confess that the Allies have blundered, but not before.