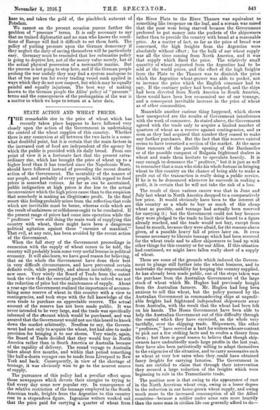 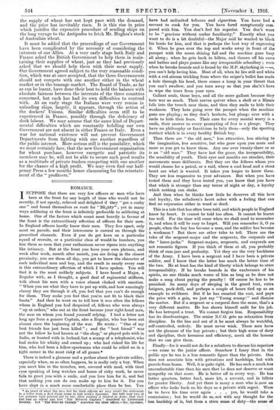 STATE ACTION AND WHEAT PRICES. T HE remarkable rise in the

price of wheat which has recently taken place happens to have followed very closely upon the action of the Government in undertaking the control of the wheat supplies of this country. Whether there is any connexion at all between the two facts is a some- what doubtful point, but it is certain that the main factors in the increased cost of food are independent of the agency by which the public is provided with its daily bread. From one point of view it is a fortunate fact that the present extra- ordinary rise, which has brought the price of wheat up to a higher level than it has touched since the Napoleonic Wars, should have followed instead of preceding the recent drastic action of the Government. The mentality of the masses of our people, and probably of every people, with regard to food prices is somewhat curious. As far as can be ascertained, public indignation at high prices is due less to the actual inconvenience which the high prices cause than to the suspicion that somebody is making an illegitimate profit. In the final resort this feeling probably arises from the reflection that evils which are inevitable must be borne, whereas evils which are the result of unfairness or selfishness ought to be combated. If the present range of prices had come into operation while the " profiteers " were-still doing the main work of supplying this country with wheat, there might have been a dangerous political agitation, against these " enemies of mankind." That evil, at any rate, has been avoided by the recent action of the Government.

When the full story of the Government proceedings in connexion with the supply of wheat comes to be told, the country will probably learn some very useful lessons in political economy. It will also learn, we have good reason for believing, that on the whole the Government have done their best in very difficult circumstances, and have prevented certain definite evils, while possibly, and almost inevitably, creating new ones. Very wisely the Board of Trade from the outset took the view that the essential problem to be solved was not the reduction of price but the maintenance of supply. About a year ago the Government realized the importance of accumu- lating some reserve of wheat in this country with a view to contingencies, and took steps with the full knowledge of the corn trade to purchase an appreciable reserve. The actual amount .of the reserve has not been made public. It was never intended to be very large, and the trade was specifically informed of the a?nount which would be purchased, and was assured that the Government would not use this hoard to knock down the market arbitrarily. Needless to say, the Govern- ment had not only. to acquire the wheat, but had also to make provision for bringing it to our shores. Very wisely, again, the Board of Trade decided that they would buy in North America rather than in South America or Australia because of the rapidity of delivery. The round voyage to Australia takes about five months, and within that period something like half-a-dozen voyages can be made from Liverpool to New York and back. Consequently, in view of the shortage of tonnage, it was obviously wise to go to the nearest source of supply.

The pursuance of this policy had a peculiar effect upon those newspapers which devote their energies to trying to find every day some new popular cry. In consequence of the relative restriction of the tonnage employed in the South American trade, freights from the Argentine to this country rose to .a stupendous figure: Ingenious writers worked out that the price paid for carrying a quarter of wheat from the River Plate to the River Thames was equivalent to something like twopence on the loaf, and a scream was raised that the poor were being starved because the Government preferred to put money into the pockets of the (shipowners rather than to provide the country with bread at a reasonable price. As a matter of fact, so far as the price of bread was concerned, the high freights from the Argentine were absolutely without effect ; for the bulk of our wheat supply was all the time coming from North America, and it was that supply which fixed the price. The relatively small quantity of wheat imported from the Argentine had to be sold at the world prices, and the effect of the high freights from the Plate to the Thames was to diminish the price which the Argentine wheat-grower was able to pocket, not to increase the price which the English consumer had to pay. If the contrary policy had been adopted, and the ships had been diverted from North America to South America, there would have been less economical use of our tonnage, and a consequent inevitable increase in the price of wheat as of other commodities.

Meanwhile another curious thing happened, which shows how unexpected are the results of Government interference with the work of commerce. As stated above, the Government agreed with the trade only to acquire a limited number of quarters of wheat as a reserve against contingencies, and as soon as they had acquired that number they ceased to make any further purchases. But the fact that this reserve existed seems to have terrorized a section of the market. At the same time rumours of the possible opening of the Dardanelles or of the possible conquest of Bulgaria frightened dealers in wheat and made them hesitate to speculate heavily. It is easy enough to denounce the " profiteer," but it is just as welt to remember that a man who risks his whole fortune in bringing wheat to this country on the chance of being able to make a profit out of the transaction is really doing a public service. If he is to be denounced whenever he succeeds in making a profit, it is certain that he will not take the risk of a loss.

The result of these various causes was that in June and July last wheat in North America dropped to a comparatively low price. It would obviously have been to the interest of this country as a whole to buy as much of this cheap wheat as possible, and tonnage had actually been reserved for carrying it ; but the Government could not buy because they were pledged to the trade to limit their hoard to a figure already reached, and the trade would not buy, except from hand to mouth, because they were afraid, for the reasons above given, of a possible heavy fall of prices later on. It even became necessary to liberate tonnage which had been reserved for the wheat trade and to allow shipowners to load up with other things for this country or for our Allies. If this situation had continued, we might have fallen really short of a supply of wheat.

These are some of the grounds which induced the Govern- ment to plunge still further into the wheat business, and to undertake the responsibility for keeping the country supplied. As has already been made public, one of the steps taken was the purchase from the Australian Government of the large stock of wheat which Mr. Hughes had previously bought from the Australian farmers. Mr. Hughes had long been anxious to sell this wheat, but the pohcy pursued by the Australian Government in commandeering ships at unprofit- able freights had frightened independent shipowners away from Australia, with the result that the wheat had been left on his hands. The Home Government have been able to help the Australian Government out of this difficulty through the control which they have exercised, on the whole very tactfully, over the shipping trade. Shipowners, like other " profiteers," have served-as a butt for writers who are content to pick out a few striking facts and to evolve a theory from them ; but there is good reason to believe that though ship- owners have undoubtedly made large profits in the last year, they have also been patriotically willing to adapt themselves to the exigencies of the situation, and to carry necessaries such as wheat at very low rates when they. could have obtained fancy freights for carrying luxuries. The Government in turn are entitled to claim that through their intervention they secured a large reduction of the freights which were beginning to rule in the Transatlantic trade.

The position now is that owing to the appearance of rust in the North American wheat crop, owing in a lesser degree to the reduction in our home-grown wheat supply, and owing much more to the increased consumption of all the Allied countries—because a soldier under arms eats more heartily than the same man in civilian life can generally afford to do- the supply of wheat has not kept pace with the demand, and the price has inevitably risen. It is this rise in price which justifies the expensive procedure of sending ships on the long voyage to the Antipodes to fetch Mr. Hughes's stock of Australian wheat.

It must be added that the proceedings of our Government have been complicated by the necessity of considering the interests of our Allies. At a very early stage both Italy and France asked the British Government to help them in main- taining their supplies of wheat, just as they had previously asked that we should help them with their meat supply. Our Government agreed subject to the very reasonable condi- tion, which was at once accepted, that the three Governments should not compete with one another either in the wheat market or in the tonnage market. The Board of Trade, as far as can be learnt, have done their best to hold the balance with absolute fairness between the interests of the three countries concerned, but each has had its own difficulties to contend with. At an early stage the Italians were very remiss in unloading ships, largely, it appears, through the action of the dockers' Unions. Similar difficulties seem still to be experienced in France, possibly through the deficiency of dock labour. We may assume that the same kind of Depart- mental difficulties which are constantly befalling our own Government are not absent in either France or Italy. Even a war for national existence will not prevent Government Departments from fighting with one another regardless of the public interest. More serious still is the possibility, which we must certainly face, that the new Government organization for wheat purchase, however energetic and patriotic its members may be, will not be able to secure such good results as a multitude of private traders competing with one another for the chance of a high profit. We may even find our half- penny Press a few months hence clamouring for the reinstate- ment of the " profiteers."